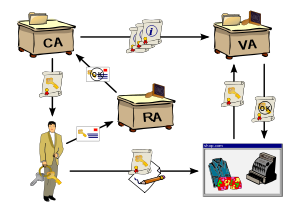 Diagram of a public key infrastructure

A public key infrastructure (PKI) is a set of hardware, software, people, policies, and procedures needed to create, manage, distribute, use, store, and revoke digital certificates[1] and manage public-key encryption. The purpose of a PKI is to facilitate the secure electronic transfer of information for a range of network activities such as e-commerce, internet banking and confidential email. It is required for activities where simple passwords are an inadequate authentication method and more rigorous proof is required to confirm the identity of the parties involved in the communication and to validate the information being transferred.[2]

In cryptography, a PKI is an arrangement that binds public keys with respective user identities by means of a certificate authority (CA). The user identity must be unique within each CA domain. The third-party validation authority (VA) can provide this information on behalf of the CA. The binding is established through the registration and issuance process. Depending on the assurance level of the binding, this may be carried out by software at a CA or under human supervision. The PKI role that assures this binding is called the registration authority (RA). The RA is responsible for accepting requests for digital certificates and authenticating the person or organization making the request.[3] In a Microsoft PKI, a registration authority is usually called a subordinate CA.[4]

Public key cryptography is a cryptographic technique that enables users to securely communicate on an insecure public network, and reliably verify the identity of a user via digital signatures.[5]

Broadly speaking, there have traditionally been three approaches to getting this trust: certificate authorities (CAs), web of trust (WoT), and simple public key infrastructure (SPKI).[citation needed]

The primary role of the CA is to digitally sign and publish the public key bound to a given user. This is done using the CA's own private key, so that trust in the user key relies on one's trust in the validity of the CA's key. When the CA is a third party separate from the user and the system, then it is called the Registration Authority (RA), which may or may not be separate from the CA.[11] The key-user binding is established, depending on the level of assurance the binding has, by software or under human supervision.[citation needed]

The term trusted third party (TTP) may also be used for certificate authority (CA). Moreover, PKI is itself often used as a synonym for a CA implementation.[citation needed]

In this model of trust relationships, a CA is a trusted third party - trusted both by the subject (owner) of the certificate and by the party relying upon the certificate.

According to NetCraft [2], the industry standard for monitoring Active TLS certificates, states that "Although the global [TLS] ecosystem is competitive, it is dominated by a handful of major CAs — three certificate authorities (Symantec, Comodo, GoDaddy) account for three-quarters of all issued [TLS] certificates on public-facing web servers. The top spot has been held by Symantec (or VeriSign before it was purchased by Symantec) ever since [our] survey began, with it currently accounting for just under a third of all certificates. To illustrate the effect of differing methodologies, amongst the million busiest sites Symantec issued 44% of the valid, trusted certificates in use — significantly more than its overall market share."

This approach involves a server that acts as an online certificate authority within a single sign-on system. A single sign-on server will issue digital certificates into the client system, but never stores them. Users can execute programs, etc. with the temporary certificate. It is common to find this solution variety with X.509-based certificates.[12]

An alternative approach to the problem of public authentication of public key information is the web-of-trust scheme, which uses self-signed certificates and third party attestations of those certificates. The singular term "web of trust" does not imply the existence of a single web of trust, or common point of trust, but rather one of any number of potentially disjoint "webs of trust". Examples of implementations of this approach are PGP (Pretty Good Privacy) and GnuPG (an implementation of OpenPGP, the standardized specification of PGP). Because PGP and implementations allow the use of e-mail digital signatures for self-publication of public key information, it is relatively easy to implement one's own web of trust.[citation needed]

One of the benefits of the web of trust, such as in PGP, is that it can interoperate with a PKI CA fully trusted by all parties in a domain (such as an internal CA in a company) that is willing to guarantee certificates, as a trusted introducer. If the "web of trust" is completely trusted then, because of the nature of a web of trust, trusting one certificate is granting trust to all the certificates in that web. A PKI is only as valuable as the standards and practices that control the issuance of certificates and including PGP or a personally instituted web of trust could significantly degrade the trustability of that enterprise's or domain's implementation of PKI.[13]

The web of trust concept was first put forth by PGP creator Phil Zimmermann in 1992 in the manual for PGP version 2.0:

As time goes on, you will accumulate keys from other people that you may want to designate as trusted introducers. Everyone else will each choose their own trusted introducers. And everyone will gradually accumulate and distribute with their key a collection of certifying signatures from other people, with the expectation that anyone receiving it will trust at least one or two of the signatures. This will cause the emergence of a decentralized fault-tolerant web of confidence for all public keys.

Another alternative, which does not deal with public authentication of public key information, is the simple public key infrastructure (SPKI) that grew out of three independent efforts to overcome the complexities of X.509 and PGP's web of trust. SPKI does not associate users with persons, since the key is what is trusted, rather than the person. SPKI does not use any notion of trust, as the verifier is also the issuer. This is called an "authorization loop" in SPKI terminology, where authorization is integral to its design.[citation needed]

An emerging approach for PKI is to use the blockchain technology commonly associated with modern cryptocurrency. Since blockchain technology aims to provide a distributed and unalterable ledger of information, it has qualities considered highly suitable for the storage and management of public keys. EmerCoin is an example of a blockchain-based cryptocurrency that supports the storage of different public key types (SSH, GPG, RFC 2230, etc.) and provides open source software that directly supports PKI for OpenSSH servers.

Developments in PKI occurred in the early 1970s at the British intelligence agency GCHQ, where James Ellis, Clifford Cocks and others made important discoveries related to encryption algorithms and key distribution.[14] However, as developments at GCHQ are highly classified, the results of this work were kept secret and not publicly acknowledged until the mid-1990s.

The public disclosure of both secure key exchange and asymmetric key algorithms in 1976 by Diffie, Hellman, Rivest, Shamir, and Adleman changed secure communications entirely. With the further development of high-speed digital electronic communications (the Internet and its predecessors), a need became evident for ways in which users could securely communicate with each other, and as a further consequence of that, for ways in which users could be sure with whom they were actually interacting.

Assorted cryptographic protocols were invented and analyzed within which the new cryptographic primitives could be effectively used. With the invention of the World Wide Web and its rapid spread, the need for authentication and secure communication became still more acute. Commercial reasons alone (e.g., e-commerce, online access to proprietary databases from web browsers) were sufficient. Taher Elgamal and others at Netscape developed the SSL protocol ('https' in Web URLs); it included key establishment, server authentication (prior to v3, one-way only), and so on. A PKI structure was thus created for Web users/sites wishing secure communications.

Vendors and entrepreneurs saw the possibility of a large market, started companies (or new projects at existing companies), and began to agitate for legal recognition and protection from liability. An American Bar Association technology project published an extensive analysis of some of the foreseeable legal aspects of PKI operations (see ABA digital signature guidelines), and shortly thereafter, several U.S. states (Utah being the first in 1995) and other jurisdictions throughout the world began to enact laws and adopt regulations. Consumer groups raised questions about privacy, access, and liability considerations, which were more taken into consideration in some jurisdictions than in others.

The enacted laws and regulations differed, there were technical and operational problems in converting PKI schemes into successful commercial operation, and progress has been much slower than pioneers had imagined it would be.

By the first few years of the 21st century, the underlying cryptographic engineering was clearly not easy to deploy correctly. Operating procedures (manual or automatic) were not easy to correctly design (nor even if so designed, to execute perfectly, which the engineering required). The standards that existed were insufficient.

PKI vendors have found a market, but it is not quite the market envisioned in the mid-1990s, and it has grown both more slowly and in somewhat different ways than were anticipated.[15] PKIs have not solved some of the problems they were expected to, and several major vendors have gone out of business or been acquired by others. PKI has had the most success in government implementations; the largest PKI implementation to date is the Defense Information Systems Agency (DISA) PKI infrastructure for the Common Access Cards program.

PKIs of one type or another, and from any of several vendors, have many uses, including providing public keys and bindings to user identities which are used for:

Some argue that purchasing certificates for securing websites by SSL and securing software by code signing is a costly adventure for small businesses.[17] Presently Symantec holds a major share in PKI certificate market which sold one third of all certificates issued globally in 2013.[18] HTTP/2, the latest version of HTTP protocol allows unsecured connections in theory, in practice major browser companies have made it clear that they would support this state-of-art protocol only over a PKI secured TLS connection.[19] Web browser implementation of HTTP/2 including edge from Microsoft, Chrome from Google and Firefox from Mozilla and Opera supports HTTP/2 only over TLS, by using ALPN extension of TLS protocol. This would mean that to get the speed benefits of HTTP/2, website owners would be forced to purchase SSL certificates controlled by corporations such as Symantec.

Current web browsers carry pre-installed intermediary certificates issued and signed by a Certificate Authority. This means browser need to carry a large number of different certificate providers, increasing the risk of a key compromise. Furthermore, governments can force certificate providers to give their root certificate keys, which in turn would help them to decrypt traffic by doing a man-in-middle-attack.

When a key is known to be compromised it could be fixed by revoking the certificate, but such a compromise is not easily detectable and can be a huge security breach. Browsers have to issue a security patch to revoke intermediary certificates issued by a compromised root certificate authority.[20] Some practical security vulnerabilities of X.509 certificates and known cases where keys were stolen from a major Certificate Authority listed below.