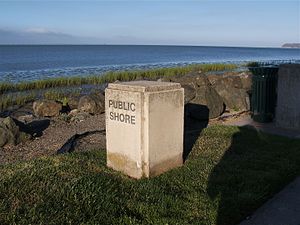 Public property is property that is dedicated to public use and is a subset of state property. The term may be used either to describe the use to which the property is put, or to describe the character of its ownership (owned collectively by the population of a state). This is in contrast to private property, owned by an individual person or artificial entities that represent the financial interests of persons, such as corporations.[1] State ownership, also called public ownership, government ownership or state property, are property interests that are vested in the state, rather than an individual or communities.[2]

In the Canada, The Public Debt and Property are under the exclusive Legislative Authority of the Parliament of Canada [3] rather than Queen or local authority, according to the Constitution Acts, 1867 and 1982, article 91.