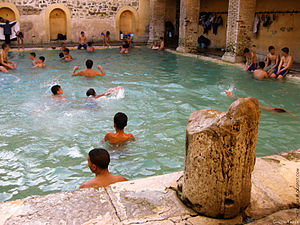 Roman public bath, still in use

Public service[1] is a service which is provided by government to people living within its jurisdiction, either directly (through the public sector) or by financing provision of services. The term is associated with a social consensus (usually expressed through democratic elections) that certain services should be available to all, regardless of income. Even where public services are neither publicly provided nor publicly financed, for social and political reasons they are usually subject to regulation going beyond that applying to most economic sectors. Public policy[2] when made in the public's interest and motivations can provide Public services. Public service is also a course that can be studied at a college and/or university. Examples of public services are the fire brigade, police, army, and paramedics.

Public services are seen as so important that for moral reasons their universal provision should be guaranteed. They may be associated with fundamental human rights (such as the right to water). The Volunteer Fire Dept. and Ambulance Corps. are institutions with the mission of servicing the community. A service is helping others with a specific need or want. Here, service ranges from a doctor curing an illness, to a repair person, to a food pantry.

A public service may sometimes have the characteristics of a public good (being non-rivalrous and non-excludable), but most are services which may (according to prevailing social norms) be under-provided by the market. In most cases public services are services, i.e. they do not involve manufacturing of goods. They may be provided by local or national monopolies, especially in sectors which are natural monopolies.

They may involve outputs that are hard to attribute to specific individual effort and/or hard to measure in terms of key characteristics such as quality. They often require high levels of training and education. They may attract people with a public service ethos who wish to give something to the wider public or community through their work.

Historically, the widespread provision of public services in developed countries usually began in the late nineteenth century, often with the municipal development of gas and water services. Later, governments began to provide other services such as electricity and healthcare. In most developed countries such services are still provided by local or national government, the biggest exceptions being the U.S. and the UK, where private provision is more significant.[citation needed]

Nonetheless, such privately provided public services are often strongly regulated, for example (in the US) by Public Utility Commissions.

In developing countries public services tend to be much less well developed. For example, water services might only be available to the wealthy middle class. For political reasons the service is often subsidized, which reduces the finance available for expansion to poorer communities.

Nationalization took off following the World Wars of the first half of the twentieth century. Across Europe, because of the extreme demands on industries and the economy, central planning was required to make production maximally efficient. Many public services, especially electricity, gas and public transport are products of this era. Following the Second World War, many countries also began to implement universal health care and expanded education under the funding and guidance of the state. 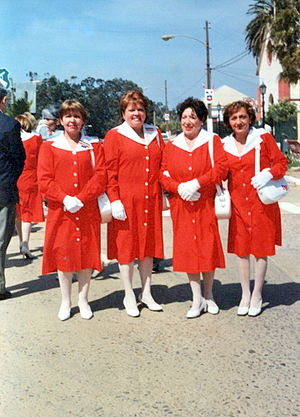 There are several ways to privatize public services. A free-market corporation may be established and sold to private investors, relinquishing government control altogether. Thus it becomes a private (not public) service. Another option, used in the Nordic countries, is to establish a corporation, but keep ownership or voting power essentially in the hands of the government. For example, the Finnish state owned 49% of Kemira until 2007, the rest being owned by private investors. A 49% share did not make it a "government enterprise", but it meant that all other investors together would have to oppose the state's opinion in order to overturn the state's decisions in the shareholder's meeting. Regulated corporation can also acquire permits on the agreement that they fulfill certain public service duties. When a private corporation runs a natural monopoly, then the corporation is typically heavily regulated, to prevent abuse of monopoly power. Lastly, the government can buy the service on the free market. In many countries, medication is provided in this manner: the government reimburses part of the price of the medication. Also, bus traffic, electricity, healthcare and waste management are privatized in this way. One recent innovation, used in the UK increasingly as well as Australia and Canada is public-private partnerships. This involves giving a long lease to private consortia in return for partly funding infrastructure.