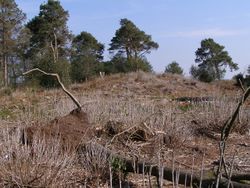 Puddletown is a village and associated civil parish in the West Dorset district of Dorset, England. The village is situated about 4.5 miles (7 km) northeast of the county town Dorchester and is sited by the River Piddle, from which it derives its name. Its civil parish covers 7,185 acres (2,908 ha) and extends to the neighbouring River Frome to the south. In 2013 the estimated population of the civil parish was 1,450.

Puddletown's parish church has significant architectural interest, particularly its furnishings and monuments. It has a 12th-century font and well-preserved woodwork, including 17th-century box pews.

Puddletown used to be known as Piddletown, but it was changed for reasons of social decorum. The timing of this change is uncertain but it probably began during the 19th century, though it wasn't officially sanctioned until the late 1950s.

Puddletown provided the inspiration for the fictional settlement of Weatherbury in Thomas Hardy's novel Far from the Madding Crowd. Weatherbury Farm, the home of principal character Bathsheba Everdene, is based on a manor house within the parish.

The name Puddletown means 'farmstead on the River Piddle'. It derives from the Old English pidele, a river-name meaning fen or marsh, and tūn, meaning farmstead. In the Domesday Book of 1086 it was recorded as Pitretone, and in 1212 it was Pideleton.[2]

Several settlements along the River Piddle derive their name from it, and previously they all were spelled like the river. However, whereas in the upper reaches of the river the settlement names—such as Piddletrenthide and Piddlehinton—retain the piddle spelling, downstream from Puddletown they now change to puddle. One explanation for this change is that Major-General Charles William Thompson, who lived at what was Ilsington Lodge after returning from the Great War, pushed through the name change because 'piddle' had a particular meaning in army circles.[3] However, the alternative name was clearly in use before this: writing in 1906 in Highways & Byways in Dorset, Sir Frederick Treves referred only to Puddletown, calling it "the Town on the River Puddle" and a "curiously named place".[4] The broadcaster and writer Ralph Wightman (1901–71), a native of the Piddle Valley and one-time Puddletown resident,[3] believed the change was due to Victorian "refinement", as he recalled that in his youth elderly aunts referred to Piddletrenthide as just "Trenthide". Although in 1946 the voters lists still referred to Piddletown, the 'refined' name of Puddletown was officially preserved in the late 1950s, when, according to Wightman, "a long County Council debate solemnly decided Piddletown should be Puddletown".[5][6]

Evidence of prehistoric human occupation in the parish exists in the form of 30 round barrows, about half of which are sited over chalk and half over Reading Beds. Many of the barrows have been damaged by more recent activities. The remains of strip lynchets of 'Celtic' fields have been found near a few of the barrows. One of the three 'Rainbarrows' on Duddle Heath has been excavated; bucket urns containing cremations from the site were taken to the Dorset County Museum.[7]

There used to be several small settlements within Puddletown parish, though except for Puddletown village these have all either diminished or disappeared. These settlements were Cheselbourne Ford (in the northeast of the parish), Bardolfeston (about half a mile northeast of Puddletown village, just north of the River Piddle, and now deserted), Hyde (now Druce Farm), Waterston, South Louvard (now Higher Waterston), Little Piddle (now Little Puddle Farm in neighbouring Piddlehinton parish) and Ilsington (in the south of the parish, by the River Frome). Records indicate that Bardolfeston was declining by the 13th century and, though still occupied in the 16th, it was completely deserted by the 17th century. Its site covers about 15 acres (6.1 ha) and is well-preserved, revealing a 40 feet (12 m)-wide hollow way aligned southwest-northeast, with the sites of at least eleven houses alongside, though the southern end of the site was destroyed when watermeadows were later created along the river.[7][9]

In the early 17th century Puddletown was one of the first places in Dorset where the use of watermeadows developed; the practice occurred at least as early as 1620, and in 1629 the manorial court decided to allow some tenants to continue making the necessary watercourses that would enable "the watering and Improvinge of theire groundes".[10]

Records from 1801 show that at that time agriculture was the main component of Puddletown's economy, though cottage industry and artisan crafts were also an important element: 596 people in the parish were primarily employed in agriculture, with 221 employed in handicrafts, manufacture and trade. Cottage industry, often undertaken by women and children, was used to supplement agricultural income, though there were fewer opportunities for this after the French Revolution.[11] 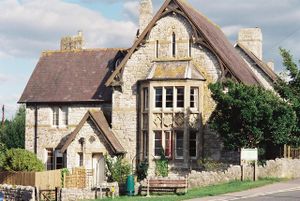 The reading room built by the Brymer family

The parish church of St Mary is mainly late medieval with an earlier core.[12] To the east of the church is Ilsington House, also known as the Old Manor, which was built in the late 17th to early 18th century.[13] It was originally owned by the 3rd Earl of Huntingdon and in 1724 by Robert Walpole. Between 1780 and 1830 it was leased to General Thomas Garth, principal equerry to King George III. The General adopted King George III's illegitimate grandson by Princess Sophia, and brought him up at the manor.[3] In 1861 the house was acquired by John Brymer and remained in the possession of the Brymer family for the next century.[3][14] The family built new cottages and a reading room in the village, and a new manor next to the church, which they restored.[15]

File:Water Meadows near Puddletown - geograph.org.uk - 1097771.jpg Puddletown civil parish extends between the flood plain and watermeadows of the River Frome in the south to the chalk watershed of Puddletown Down in the north.[9][21] It covers 7,185 acres (2,908 ha) and is bisected by the River Piddle, which crosses it from west to east.[7] Measured directly, Puddletown village is about 4.5 miles (7.2 km) northeast of Dorchester, 16 miles (26 km) west of Poole and 11 miles (18 km) southwest of Blandford Forum.[22]

The bedrock geology of the parish comprises rocks formed in the Santonian and Campanian ages of the Cretaceous period and the Eocene age of the Palaeogene period. In places these are overlain by younger Quaternary drift material: river terrace and head deposits, clay-with-flints, and alluvium—the last found only in the valley floors of the larger watercourses.[21] On Puddletown Heath (now mostly covered by Puddletown Forest) are more than 370 solution hollows or sinkholes; these constitute the largest concentration of hollows on the heathlands in the area.[23]

The River Frome, which forms the southern boundary of the parish, is designated by Natural England as a Site of Special Scientific Interest.[24]

Figures from the 2011 census have been published for Puddletown parish combined with the small parish of Athelhampton to the east; in this area there were 663 dwellings,[25] 614 households and a population of 1,405.[26]

Fifty-six structures within the parish are listed by Historic England for their historic or architectural interest, including two (the parish church and Waterston Manor) that are listed as Grade I, and three (Ilsington House, The Old Vicarage, and 8 The Square) that are Grade II*.[27] 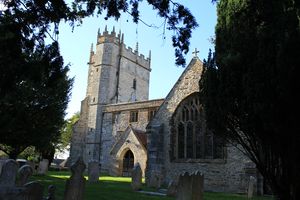 Puddletown's parish church, dedicated to St Mary, has been described as being "of considerable architectural interest",[7] "of exceptional interest for its furnishings and monuments"[28] and "one of the most exciting parish churches in the county".[29] It has 12th-century origins—parts of the tower date from 1180-1200[29]—but was rebuilt and enlarged between the 13th and 16th centuries.[7][28] The 12th-century font is particularly notable, being of a tapering beaker shape, with diapering depicting crossing stems and Acanthus leaves; its cover is an octagonal pyramid dating from about 1635, when the church interior was refitted.[3][7] There is a panelled roof in the nave, and 17th-century box pews, pulpit and gallery. There are also a number of 15th- and 16th-century monumental brasses and some stained glass by Ninian Comper.[12] The South or Martyn family chapel has three 16th century tombs with alabaster effigies. In 1910 the church was partially restored by Charles Ponting.[7][28]

The Old Vicarage, previously the east wing of the vicarage, was originally a timber-framed building built about 1600. It was clad in brick in the 18th century (after the vicarage had been extended west in 1722) and a third storey added early in the 19th century. The 1722 west-wing extension became 8 The Square and is listed separately.[7][31][32] 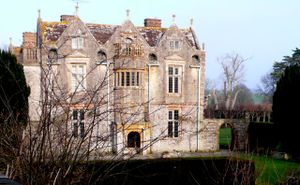 Waterston Manor, the basis for Weatherbury Farm in Far from the Madding Crowd

Puddletown has a village hall, which has a kitchen and bar, full disabled facilities and access, and a capacity for between 100 and 160.[33] Since 2013 it has also housed Puddletown Community Library, which is operated solely by volunteers.[34] On Athelhampton Road there is a doctor's surgery, which also treats patients who live in surrounding villages.[35] Puddletown has a recreation ground on Three Lanes Way; it has one grass cricket pitch and two grass football pitches (one junior, one full-size).[36]

Puddletown is the basis for the village of "Weatherbury" in Thomas Hardy's novel Far from the Madding Crowd.[3] Weatherbury Farm, the house of Bathsheba Everdene, is based on Waterston Manor, between Puddletown and Piddlehinton.[37] Hardy's cousin, Tryphena Sparks, who was the inspiration for Hardy's poem Thoughts of Phena at News of Her Death, lived in Puddletown.[38]

Cardinal Pole, the last Roman Catholic Archbishop of Canterbury, was vicar of the parish from 1532 to 1536.[29] The author and broadcaster Ralph Wightman (1901–1971) lived in Puddletown in the later years of his life; he lived in the 16th-century Tudor Cottage in The Square.[3][7] The writer Constantine Fitzgibbon owned Waterston Manor for part of the 20th century.[37]