From Infogalactic: the planetary knowledge core
Jump to: navigation, search
File:Malolo by Agate.jpg
The American punitive expedition against Malolo, Fiji in 1840 by Alfred Agate.

A punitive expedition is a military journey undertaken to punish a state or any group of persons outside the borders of the punishing state. It is usually undertaken in response to perceived disobedient or morally wrong behavior, either as revenge or to apply strong diplomatic pressure without a formal declaration of war. More commonly in the 19th century, punitive expeditions were used as pretexts to colonial adventures that resulted in annexations, regime changes or changes in policies of the affected state to favour one or more colonial powers.

When the territorial sovereign is too weak or is unwilling to enforce respect for international law, a state which is wronged may find it necessary to invade the territory and to chastise the individuals who violate its rights and threaten its security.[1] 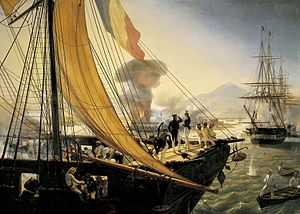