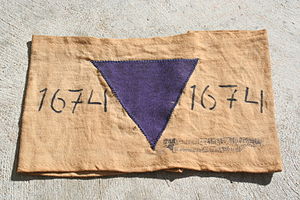 The purple triangle was a concentration camp badge used by the Nazis to identify Bibelforscher (the German name for Jehovah's Witnesses) in Nazi Germany. A small number of Adventists, Baptists, Bible Student splinter groups, and pacifists (combined less than one percent) were also identified by the badge.[1] Nazism opposed unorthodox-Christian religious minorities (along with Jews), but made the Bible Students the object of particularly intense persecution, including such extensive incarceration that a distinct badge was assigned to them.[2][3]

Jehovah's Witnesses came into conflict with the Nazi regime because they refused to salute Adolf Hitler with the traditional "Heil Hitler" salute, believing that it conflicted with their worship of Jehovah. Because refusing to salute Hitler was considered a crime, Jehovah's Witnesses were arrested, and their children attending school were expelled, detained and separated from their families. When Germany made military enlistment mandatory, Jehovah’s Witnesses were persecuted because they refused to bear arms. Being politically neutral, they also refused to vote in the 1936 elections.[4]

Based on Nuremberg Laws, Jehovah's Witnesses who were also classified as ethnic Jews wore a badge comprising a purple triangle superimposed on a yellow triangle.