From Infogalactic: the planetary knowledge core
Jump to: navigation, search
For other uses, see PWN (disambiguation).
Not to be confused with Pone.
"Powned" redirects here. For Dutch public broadcaster, see PowNed. 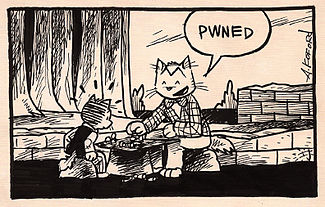 Pwn is a leetspeak slang term derived from the verb own,[1][2][3] as meaning to appropriate or to conquer to gain ownership. The term implies domination or humiliation of a rival,[4] used primarily in the Internet-based video game culture to taunt an opponent who has just been soundly defeated (e.g., "You just got pwned!").[5]

In script kiddie jargon, pwn means to compromise or control, specifically another computer (server or PC), web site, gateway device, or application. It is synonymous with one of the definitions of hacking or cracking, including iOS jailbreaking. The Pwnie Awards are awarded by a group of security researchers.[4]

Popularity of the term among teenagers rose in the mid-2000s, with the spread from the Internet written form to use in spoken language.[6]

Because pwn is primarily used in written form, it has no single generally accepted pronunciation: renditions include /ˈoʊn/ OHN, /ˈpwoʊn/ PWOHN, /ˈpoʊn/ POHN, /pəʔˈoʊn/ pə'-OHN, /ˈpɔːn/ PAWN, /piːˈoʊn/ pee-OHN, and /ˈpwiːn/ PWEEN. Originally, pwn and its variants were pronounced /ˈoʊn/ in the same way as the verb own, the tail of the p being "silent". A notable usage of this pronunciation can be seen in the Internet distributed series Pure Pwnage (pronounced "pure ownage" /ˈpjʊər ˈoʊnᵻdʒ/).[7] [8][9]