Count Pyotr Andreyevich Tolstoy (Russian: Пётр Андреевич Толстой) (1645–1729) was a Russian statesman and diplomat, prominent during and after the reign of Peter the Great. He was the ancestor of all the Counts Tolstoy, including the novelist Leo Tolstoy (September 9 [O.S. August 28], 1828 – November 20 [O.S. November 7], 1910) and Alexei Tolstoy the writer. He had two sons, Ivan and Peter born in 1685 and 1680 respectively. His wife was Solomonic Timofeevna Dubrovskaya born 1660 and died 1722. Both his sons died the year before him in exile with him. He had many grandchildren. The family came back and had all honors, and land restored by the Empress Elizabeth, daughter of Peter the Great in 1760.

Pyotr Tolstoy, assumed by some to be an "okolnichy", while for other historians he came from a "boyar" background, socially speaking, served in 1682 as Chamberlain at the court of childless Tsar Feodor III Alekseevich, Tsar 1676–1682. On account of his family relationship with the Miloslavsky family, he miscalculated the strength of the tsarevna Sophia Alekseyevna, (September 17 [N.S. September 27], 1657 – regent of Russia (1682–1689) – July 3 [N.S. July 14], 1704), full sister of Feodor III and third daughter, also, of Tsar Alexei I of Russia by his first wife, Maria Miloslavskaya and became one of her most energetic supporters, but contrived to join the other, and winning, side just before the final catastrophe.

Peter was the only son from Tsar Alexei I of Russia's second marriage (to Nataliya Kyrillovna Naryshkina), and therefore, was the younger half-brother of childless Tsar Feodor III and of Sophia, temporary regent of Russia. Therefore, for a long time, Peter kept his latest recruit at arm's length. However, in 1697, Tolstoy volunteered to go to Venice to learn Italian and ship-building, and Peter could not resist the subtle flattery implied in such a proposal from a middle-aged Muscovite noble.

In November 1701, Tolstoy was appointed the first regularly accredited Russian ambassador to the Ottoman Empire, known as The Porte, and in this demanding role, he more than justified the confidence of the most exacting of masters. Even before Poltava, Tolstoy had the greatest difficulty in preventing the Turks from aiding the Swedes. When Charles XII took refuge on Turkish soil, Tolstoy instantly demanded his extradition. This diplomatic blunder only irritated the already alarmed Turks, and on October 10, 1710, Tolstoy was thrown into the Seven Towers, a proceeding tantamount to a declaration of war against Russia. On his release, in 1714, he returned to Russia, was created a senator, and closely associated himself with the omnipotent favorite, Aleksandr Menshikov. [1]

In 1717, his position during Peter's reign was secured once for all by his successful mission to Naples to bring back the unfortunate tsarevich Alexei Petrovich, (February 28, 1690 – by death penalty authorized by 126 members of the equivalent of the Russian Duma following the wishes of his father, July 7, 1718, aged 28), the son of Tsar Peter I whom he may be said to have literally hunted to death.

The unfortunate tsarevich Alexei Petrovich, a widower since 1715, at the age of 25, had been the husband of Saxony princess Charlotte Christine of Brunswick-Wolfenbüttel, (August 29, 1694, – November 2, 1715, aged 21). Charlotte Christine's father was the father-in-law of the Russian tsarevich, and the father-in-law of the Emperor of the Holy Roman Emperor, Charles VI of Austria, (October 1, 1685 – October 20, 1740, aged 55), the heir apparent of the mighty Spanish Empire during the Spanish Succession War, a European War involving several of the most politically significant West European Powers. 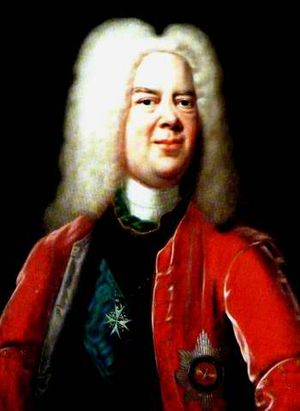 Louis Rudolph, Duke of Brunswick-Lüneburg, the father in law of tsarevich Alexei Petrovich and of the Holy Roman Emperor Charles VI of Austria.

The marriage of tsarevich Alexei Petrovich in Torgau, Poland, without the permission of his father, Tsar Peter I, was thought, apparently an unwilling father in law to the Saxon Princess, to be a trahison to Russia, soon to be punished by death on his son.

For this, Tolstoy earned the undying hatred of the majority of the Russian people; but Tsar Peter I naturally regarded it as an inestimable service and loaded Tolstoy with honors and riches, appointing him, moreover, the head of the Secret Chancellery, or official torture chamber, a post for which Tolstoy, nearly 80 years old by then, was by nature eminently fitted, as his vigorous prosecution of the Mons Affair (1724) made clear.

He materially assisted Aleksandr Menshikov to raise the empress consort, to become Catherine I, (deceased less than 2 years later in 1727), to the throne on the decease of Peter in 1725, and the new sovereign made him a count and one of the six members of the newly instituted Supreme Privy Council (Верховный тайный совет).

Tolstoy was well aware that the elevation of the grand duke Peter II, son of the tsarevich Alexei, grandson of Piotr I would put an end to his own career and endanger his whole family. 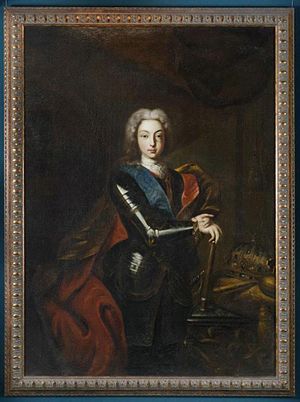 Peter II, Tsar and Autocrat of All the Russias.

Tsar Peter II Alexeyvich, here above, was the son of tsarevich Alexei Petrovich "Romanov", executed at age 28, the widower at 25 of German Princess Charlotte Christine, sister in law of Emperor Charles VI of Austria, would be King Charles III Habsburg of Spain, defeated in the Spanish Succession War however, before 1713. Peter II, grandson of Peter I of Russia, was Tsar of Russia aged 12, for three years, and died aged 15. One of the next "Bourbon" Kings of Imperial Spain would be called Charles III of Spain, from a "winning Bourbon" father and a "Farnesio" woman to take thus out all traces or remembrances of the later Holy Roman Emperor Charles VI of Austria former battles for succession in Spain.

Therefore, when Menshikov, during the last days of Catherine I, declared in favor of Peter, Tolstoy endeavoured to form a party of his own whose object it was to promote the accession of Catherine's second daughter, the tsarevna Elizabeth. But Menshikov was too strong and too quick for his ancient colleague. On the very day of Empress Catherine I death (May 11, 1727), Tolstoy, now in his 82nd year, was banished to the Solovetsky Monastery in the White Sea, where he died two years later. [1]

Pyotr Tolstoy is the author of a sketch of the impressions made upon him by Western Europe during his tour in the years 1697–1698 and also of a detailed description of the Black Sea. [1]