Pyrgo Park is a park at Havering-atte-Bower in the London Borough of Havering, in North East London, England. It is the site of the former Pirgo Palace, built before 1540 and demolished by 1814; and of Pyrgo House, built 1841, which lasted less than a century.

Pyrgo is one of three large parklands in Havering-atte-Bower, the others being Bedfords Park and Havering Country Park. 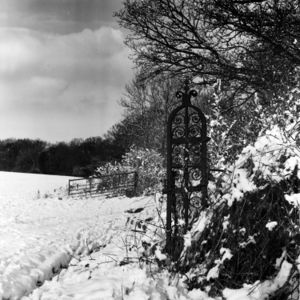 An iron gatepost at the entrance of Pirgo Place, a remnant of the 19th-century mansion

Pirgo, spelt Portegore by Henry VIII’s officials, was a royal residence of King Henry VIII, from 1541, situated nearby the royal palace of Havering in the liberty of Havering-atte-Bower. Providing a pleasing position on a gentle ridge barely twenty easy miles from London with wide views westwards, the Havering area had more than six centuries of association with royalty. King Edward the Confessor (1003-1066) is said to have been disturbed there at his devotions by nightingales and prayed successfully for their banishment from Havering Park. Havering Palace continued to be used by successive monarchs until 1638 and Havering Park remained with the Crown until 1828. A new mansion was built on the site in 1841 and has since been demolished.

About 1536 the King's Steward, Sir Brian Tuke, constructed a smaller park at Pirgo, north-east of Havering village and the King made it his personal property. The Steward was allowed to continue living at Pirgo until about 1541.

Henry VIII had the mansion repaired and completed the emparkment of Pirgo.

Succession to the Crown

The King is said to have summoned his estranged daughters, Mary and Elizabeth, to his new country house at Pirgo in 1542 and being pleased with them he made the decision to restore them to the succession to the Throne.

On 24 April 1559, a few months after her accession to the throne, hearing his plea of poverty, Queen Elizabeth gave the manor with its royal residence to her second cousin, Lord John Grey, uncle of Lady Jane Grey.

Owners and residents after Henry VIII

The first available description dates from 1594 when the former royal residence was described as "a fair house", shown on a map dated about 25 years later as a large gabled-building. In 1670 taxes were paid on 30 hearths. The site, on which terracing of the gardens was still visible after WWI, was northwest of the surviving farm buildings and was partly excavated in 1972.

The Pirgo estate included a domestic chapel housing Grey family tombs, and memorials to several members of the Cheke (Cheek) family. All the Cheke remains were removed to Havering-atte-Bower Parish Church circa 1768.

from Collins' Peerage of England, published 1812.

Between about 1771 and 1778 the Archer family demolished the chapel and the wings of Pirgo House. It continued in use for a short time, but the remainder of the former royal residence seems to have been demolished by about 1814.