QVC was founded on June 13, 1986 by Joseph Segel. One of the first brands to sign a two-year deal with QVC for its products was Sears.[citation needed] The channel's first live broadcast took place at 7:30 p.m. ET on November 24 of that year, reaching 7.6 million cable television homes; the first item sold was a "Windsor Shower Companion" shower radio, presented by host John Eastman (Bob Bowersox was the first host seen on-screen).[4] The corporation later set a new record for first full-year fiscal sales for a new public company of $112 million.[5]

Initially broadcast live from 7:30 p.m. until midnight ET each weekday and all day on Saturdays and Sundays, the channel extended its live programming to 24 hours in January 1987. QVC acquired its top competitor, the Cable Value Network (CVN), in 1989. The $380 million deal contributed to a loss of $17 million during the next fiscal quarter, and then led to difficulties in the couple of years that followed.[6]

On February 2, 1995, Comcast purchased a majority shareholder stake in QVC, Inc., taking control of the corporation. That year, QVC kicked off the "Quest for America's Best: 50 in 50 Tour," a 50-week nationwide product search. Q2, a separate channel for more upscale shoppers, was founded in 2004 but abandoned in 2006.[7] QVC.com was started in 1996 as iQVC.[8]

In 1998, two former hosts filed a class-action lawsuit against QVC, claiming that they were discriminated against by the shopping channel based on their race. The lawsuit went on to state that QVC refused to allow non-white hosts any permanent daytime/primetime spots, which relegated them to the overnight hours, otherwise known as the "graveyard shift." Because of this, the non-white hosts were paid considerably less than the white hosts.[9][10]

In July 2003, Comcast sold its majority share to Liberty Media. On September 23, 2007, QVC U.S. rebranded itself, changing its logo on-air and online. The rebranding was accompanied by an advertising campaign with the tagline "iQdoU?" ("I shop QVC, do you?") that had preceded the rebrand with billboards in major U.S. cities. The iQdoU? campaign also included a "teaser" website.[11][12]

On September 30, 2010, at 11 p.m., QVC began broadcasting in Italy, both on satellite and through digital terrestrial television. In 2012, QVC partnered with China National Radio to take over operations of its home shopping network and associated internet e-commerce site. Its initial reach was reported to be 35 million households.

In 2013, QVC partnered with Ion Media Networks to bring its programming to broadcast television, through Ion Television. QVC began to be carried as the fifth digital subchannel on most Ion Television owned-and-operated stations beginning on August 5, 2013; due to technical limitations caused by the number of subchannels Ion requires its stations to carry, QVC is carried in a squeezed full-screen 4:3 format and is transmitted in standard definition. The channel is also broadcast on digital subchannels of low-powered television stations in selected areas. The broadcast service is branded as "QVC Over the Air", with an accompanying on-screen bug appearing on the lower right corner of the screen during the network's programming.

On August 22, 2013, QVC launched a timeshift channel called QVC Plus (the first such channel operated by a home shopping network), made available initially on cable provider Bright House Networks and satellite provider DirecTV, which broadcasts the channel's programming on a three-hour tape delay.[2] The owner of television shopping network QVC announced it is paying $2.4 billion to buy Internet retailer Zulily,[13] a flash-sales pioneer that has struggled recently with slowing sales gains.[14] 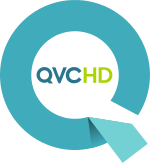 QVC HD is a high definition simulcast feed of QVC, which broadcasts in the 1080i resolution format. QVC became the first shopping network to offer a native high-definition simulcast channel in May 2009. The 4:3 cut for its standard definition feed in this 16:9 presentation is made to the right of the screen rather than on both sides of the 4:3 frame, allowing the network to place its graphics fully to the left and lower portions of the screen to maximize camera presentation space. 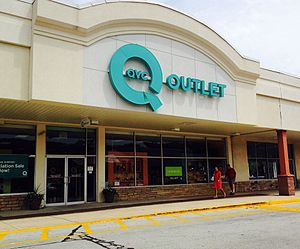 QVC broadcasts live in the United States 24/7 (apart from the Christmas show which is pre-recorded) to more than 100 million households, and ranks as the number two television network in terms of revenue (#1 in home shopping networks), with sales in 2010 giving a net revenue of $7.8 billion.

Every year the “QVC Presents ‘FFANY Shoes on Sale’” telethon is broadcast in which donated designer shoes are sold at half the suggested retail price and 80% of the proceeds go to breast cancer research and education. It is organized with the Fashion Footwear Association of New York, which runs a coinciding Shoes on Sale initiative along with an awards gala.[24][25][26][27]

QVC UK was launched on 1 October 1993. QVC UK's headquarters and broadcasting facilities are in Chiswick Park, West London. Call centre and distribution warehouse are situated in Knowsley, Merseyside. QVC UK also runs two outlet stores, one in Warrington, the other in Shrewsbury. QVC UK also operates three channels made up mostly of rerun segments from the live channel, QVC Beauty, QVC Extra and QVC Style. The company's UK sales in 2013 were worth $660 million.[21]

QVC UK's main channel broadcasts live 17 hours a day, 364 days a year. For the seven 'non-live' hours a day and on one day a year, Christmas Day, the main channel shows rerun segments from the live channel.

QVC Germany, incorporated in Düsseldorf, runs call centre operations from sites in Bochum and Kassel, whilst distribution is handled from a dedicated warehouse in Hückelhoven. The company's 2013 sales were worth $970 million.[21]

QVC Germany broadcasts live 17 hours a day, 363.5 days a year (the channel goes off-air on Christmas Eve (with no programming after noon) and Christmas Day). QVC has two additional channels in Germany, QVC Plus and QVC Beauty. 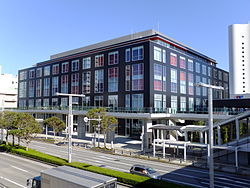 QVC Japan is based in Makuhari, where its corporate headquarters and call center facility are located. Distribution facilities are in Sakura City. The company's 2013 sales were worth $1.02 billion.[21]

QVC Italy was launched in October 2010.[28] QVC Italy's headquarters and broadcasting facilities are located at Brugherio, near Milan. The company's 2013 sales were worth $130 million.[21]

QVC Italy broadcasts live 17 hours a day (although the channel runs 24 hours a day), 364 days a year. The primary distribution platforms for QVC Italy are digital terrestrial television and satellite.

In the summer of 2015, QVC launched in France.[29] Before the launch, the company said it expected to create about 200 jobs in its first two years in the country. A studio center in suburban Paris produces the channel's content, which was available initially online, on mobile devices and on major satellite TV, cable TV and internet TV - with other platforms due to carry the signal 'very soon'.[30] The channel's corporate website said QVC stood for: Qualité, Valeur, Confiance, replacing convenience with (the French for) confidence.[31]

QVC/CNR (China) is based in Beijing and operates both a television broadcast and associated e-commerce website cnrmall.com. The China operation is a 51/49 joint venture between state-owned China National Radio and QVC, based on the pre-existing CNR channel reaching 35 million households, with plans to grow to 195 million households that have digital cable.[32] Chinese law prohibits private control of television stations, so this is the maximum position QVC can hold in its Chinese operations. QVC/CNR broadcasts live programming 12 hours a day and then replays the previous 12-hour segment.[citation needed] The company's 2013 sales were worth $110 million.[21]

In the US, QVC's live broadcast is supported by 25 hosts. They come from a variety of backgrounds and each works a shift of one-to-four-hour on between two and five days a week.

QVC's hosts are often supported by a product representative for certain products.

This film, television or video-related list is incomplete; you can help by expanding it with reliably sourced additions.