The kanun (Arabic: قانون‎‎, qānūn, pl. qawānīn; Greek: κανονάκι, kanonaki; Armenian: քանոն, k’anon; Persian: قانون‎‎, qānūn; Azerbaijani: qanun; Turkish: kanun) is a string instrument played in much of the Middle East, Central Asia, and southeastern Europe. The name derives from the Arabic word kānun, which means "rule, norm, principle" itself from ancient Greek 'κανών' rule. Its traditional music is based on maqamat. It is a type of large zither with a narrow trapezoidal soundboard. Nylon or PVC strings are stretched over a single bridge poised on fish-skins on one end, attached to tuning pegs at the other end.

Qanun used in Turkey have 26 courses of strings, with three strings per course. It is played on the lap by plucking the strings with two tortoise-shell picks, one in each hand, or by the fingernails, and has a range of three and a half octaves, from A2 to E6. The dimensions of Turkish kanuns are typically 95 to 100 cm (37-39") long, 38 to 40 cm (15-16") wide and 4 to 6 cm (1.5-2.3") high.[1] The instrument also has special latches for each course, called mandals. These small levers, which can be raised or lowered quickly by the performer while the instrument is being played, serve to change the pitch of a particular course slightly by altering the string lengths.[2] 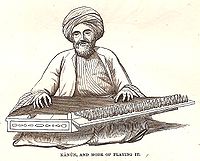 While Armenian kanuns employ half-tones and Arabic kanuns quarter-tones, typical Turkish kanuns divide the equal-tempered semitone of 100 cents into 6 equal parts, yielding 72 equal divisions (or commas) of the octave. Not all pitches of 72-tone equal temperament are available on the Turkish kanun, however, since kanun makers only affix mandals for intervals that are demanded by performers. Some kanun makers choose to divide the semitone of the lower registers into 7 parts instead for microtonal subtlety at the expense of octave equivalences. Hundreds of mandal configurations are at the player's disposal when performing on an ordinary Turkish kanun. 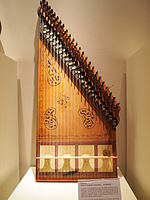 Mandals were implemented, according to Rauf Yekta, some 30 years prior to his submission of his invited monograph on Turkish Music to the 1922 edition of Albert Lavignac's Encyclopédie de la Musique et Dictionnaire du Conservatoire.[3] The kanun, prior to that time, remained rather inflexible to perform on, especially in the case of modulations, requiring the player to use the thumb fingernail to depress on the leftmost ends of the strings for on-the-fly intervallic alteration. Despite this, the nowadays widespread equidistant 24- or 72-tone tuning of common Arab and Turkish qanun models do not exactly reproduce the traditionally understood interval ratios of Arabic maqam or Ottoman Turkish makam scales.[citation needed]