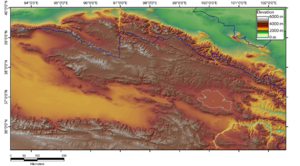 Lua error in Module:Coordinates at line 668: callParserFunction: function "#coordinates" was not found. The Qilian Mountains (Tsilien Mountains; Chinese: 祁连山; pinyin: Qílián Shān; Wade–Giles: Ch'i2-lien2 Shan1; Mongghul: Chileb), also known as Nan Shan (Chinese: 南山, literally "Southern Mountains", as it is to the south of Hexi Corridor), is a northern outlier of the Kunlun Mountains, forming the border between Qinghai and the Gansu provinces of northern China.[1]

The range stretches from the south of Dunhuang some 800 km to the southeast, forming the northeastern escarpment of the Qinghai-Tibet Plateau and the southwestern border of the Gansu Corridor.

The range continues to the west as Yema Shan (5,250 m) and Altun Shan (5,798 m). To the east, it passes north of Qinghai Lake, terminating as Daban Shan and Xinglong Shan near Lanzhou, with Maoma Shan peak (4,070 m) an eastern outlier. Sections of the Ming Dynasty's Great Wall pass along its northern slopes, and south of northern outlier Longshou Shan (3,616 m).

The Qilian mountains are the source of numerous, mostly small, rivers and creeks that flow northeast, enabling irrigated agriculture in the Gansu Corridor (Hexi Corridor) communities, and eventually disappearing in the Alashan Desert. The best known of these streams is the Ejin (Heihe) River.

Biandukou (扁都口), with an altitude of over 3500 m, is a pass in the Qilian Mountains. It links Minle County of Gansu in the north and Qilian County of Qinghai in the south.[3]

The Shiji mentions the "Qilian mountains" together with Dunhuang as the homeland of the Yuezhi. A scholar however has suggested that the name here refers to the mountains now known as Tian Shan, 1,500 km to the west, and Dunhuang may be the Dunhong mountain.[4] Qilian (祁连) is said to be as a Xiongnu word meaning "sky" (Chinese: 天) by Yan Shigu, a Tang Dynasty commentator on the Shiji.

The mountain range was formerly known in European languages as Richthofen Range after Ferdinand von Richthofen, who was the Red Baron's explorer-geologist uncle.[5]

The mountain range gives its name to Qinghai's Qilian County.