From Infogalactic: the planetary knowledge core
Jump to: navigation, search
This article is about the festival. For the solar term, see Qingming.

The Qingming or Ching Ming Festival, also known as Tomb-Sweeping Day in English,[1][2] is a traditional Chinese festival on the first day of the fifth solar term of the traditional Chinese lunisolar calendar. This makes it the 15th day after the Spring Equinox, either 4 or 5 April in a given year.[3][4] Other common translations include Chinese Memorial Day and Ancestors' Day.

In the mainland, the holiday is associated with the consumption of qingtuan, green dumplings made of glutinous rice and barley grass. In Taiwan, the similar confection is known as caozaiguo or shuchuguo.

A similar holiday is observed in the Ryukyu Islands, called Shīmī in the local language.

The festival originated from the Cold Food Festival ("Hanshi Festival"), established by Chong'er, Duke Wen of Jin, during the Spring and Autumn period. The festival was a memorial for his retainer Jie Zitui, who had loyally followed him during his years of exile. Supposedly, he once even cut meat from his own thigh to provide Chong'er with soup. Once Chong'er was enthroned as duke, however, Jie considered his services no longer required and resigned. Although Duke Wen was generous in rewarding those who had helped him in his time of need, he long passed over Jie, who had moved into the forest with his mother. Duke Wen went to the forest in 636 BC but could not find them. He then ordered his men to set fire to the forest in order to force Jie out. When Jie and his mother were killed instead, the duke was overcome with remorse and ordered three days without fire to honor Jie's memory. The city erected over the former forest is still called Jiexiu (lit. "Jie's rest").

The present importance of the holiday is credited to the Tang Emperor Xuanzong. Wealthy citizens in China were reportedly holding too many extravagant and ostentatiously expensive ceremonies in honor of their ancestors. In AD 732, Emperor Xuanzong sought to curb this practice by declaring that such respects could be formally paid only once a year, on Qingming.[5] 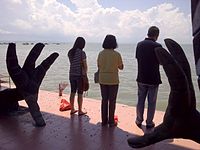 An Indonesian Chinese family pray for their deceased members at Qingming Festival of 2013 under the Heaven Gate of Sanggar Agung.

Qingming Festival is when Chinese people visit the columbaria, graves or burial grounds to pray to their ancestors.

The Qingming Festival is an opportunity for celebrants to remember and honour their ancestors at grave sites. Young and old pray before the ancestors, sweep the tombs and offer food, tea, wine, chopsticks, joss paper, and/or libations to the ancestors. The rites have a long tradition in Asia, especially among farmers. Some people carry willow branches with them on Qingming or put willow branches on their gates and/or front doors. They believe that willow branches help ward off the evil spirit that wanders on Qingming.

On Qingming, people go on family outings, start the spring plowing, sing, and dance. Qingming is also a time when young couples traditionally start courting. Another popular thing to do is to fly kites in the shapes of animals or characters from Chinese opera.[6] Another common practice is to carry flowers instead of burning paper, incense, or firecrackers.[7] 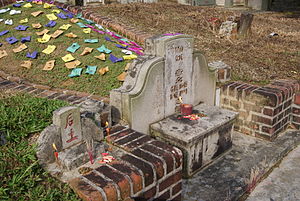 Despite having no official status, the overseas Chinese communities in Southeast Asian nations, such as those in Singapore and Malaysia, take this festival seriously and observe its traditions faithfully. Some Qingming rituals and ancestral veneration decorum observed by the oversea Chinese in Malaysia and Singapore can be dated back to Ming and Qing dynasties, as the oversea communities were not affected by the Cultural Revolution in Mainland China. Qingming in Malaysia is an elaborate family function or a clan feast (usually organized by the respective clan association) to commemorate and honour recently deceased relatives at their grave sites and distant ancestors from China at home altars, clan temples or makeshift altars in Buddhist or Taoist temples. For the oversea Chinese community, the Qingming festival is very much a family celebration and, at the same time, a family obligation. They see this festival as a time of reflection and to honour and give thanks to their forefathers. Overseas Chinese normally visit the graves of their recently deceased relatives on the nearest weekend to the actual date. According to the ancient custom, grave site veneration is only feasible ten days before and after the Qingming Festival. If the visit is not on the actual date, normally veneration before Qingming is encouraged. The Qingming Festival in Malaysia and Singapore normally starts early in the morning by paying respect to distant ancestors from China at home altars. This is followed by visiting the graves of close relatives in the country. Some follow the concept of filial piety to the extent of visiting the graves of their ancestors in mainland China. Traditionally, the family will burn spirit money and paper replicas of material goods such as cars, homes, phones and paper servants. In Chinese culture, it is believed that people still need all of those things in the afterlife. Then family members take turns to kowtow three to nine times (depending on the family adherence to traditional values) before the tomb of the ancestors. The Kowtowing ritual in front of the grave is performed in the order of patriarchal seniority within the family. After the ancestor worship at the grave site, the whole family or the whole clan feast on the food and drink they brought for the worship either at the site or in nearby gardens in the memorial park, signifying family reunion with the ancestors. Another ritual related to the festival is the cockfight,[8] as well as being available within that historic and cultural context at Kaifeng Millennium City Park (Qingming Riverside Landscape Garden).[9][10]

The holiday is often marked by people paying respects to those who died in events considered sensitive.[11] The April Fifth Movement and the Tiananmen Incident were major events in Chinese history which occurred on Qingming. When Premier Zhou Enlai died in 1976, thousands visited him during the festival to pay their respects. Many also pay respects to victims of the Tiananmen Square protests in 1989 and Zhao Ziyang.[12]

The Qingming festival holiday has a significance in the Chinese tea culture since this specific day divides the fresh green teas by their picking dates. Green teas made from leaves picked before this date are given the prestigious 'pre-qingming' (清明前) designation which commands a much higher price tag. These teas are prized for having much lighter and subtler aromas than those picked after the festival.[citation needed]

Main article: Along the River During the Qingming Festival

The famous Qingming scroll by Zhang Zeduan is an ancient Chinese painting which portrays the scene of Kaifeng city, the capital of the Song Dynasty during a Qingming festival.

Panorama of Along the River During the Qingming Festival, 12th century original by Zhang Zeduan (1085–1145)

Panorama of Along the River During the Qingming Festival, an 18th century recreation of the 12th century original

Qingming was frequently mentioned in Chinese literature. Among these, the most famous one is probably Du Mu's poem (simply titled "Qingming"):

Although the date is not presently a holiday in Vietnam, the Qingming festival is mentioned (under the name Thanh Minh) in the epic poem The Tale of Kieu, when the protagonist Kieu meets a ghost of a dead old lady. The description of the scenery during this festival is one of the best-known passages of Vietnamese literature: