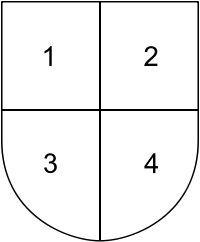 A basic diagram of a typical shield parted quarterly 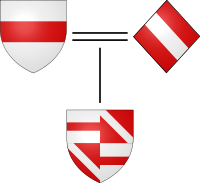 Example of the simplest case of quartering two coats of arms 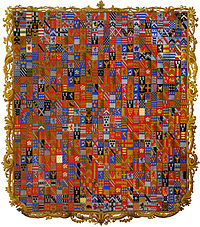 The 719 quarterings of George, Marquess of Buckingham 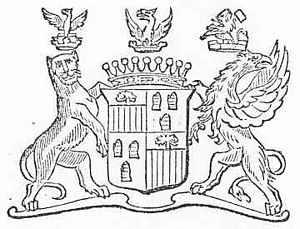 Typically, a quartering consists of a division into four equal parts, two above and two below (party per cross). An example is the Sovereign Arms of the United Kingdom, as used outside Scotland, which consists of four quarterings, displaying the Arms of England, Scotland and Ireland, with the coat for England repeated at the end. (In the royal arms as used in Scotland, the Scottish quartering appears in the first and fourth quarters and the English one second.) 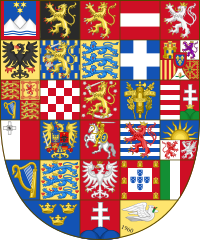 The coats of arms of the 28 Member States of the modern European Union hypothetically arranged as quarterings in a traditional union shield.

However, in most traditions there is no limit on the number of divisions allowed, and the records of the College of Arms include a shield of 323 quarterings for the family of Lloyd of Stockton. These 323 quarterings include numerous repeated attributed arms assigned to Welsh chieftains from the 9th century or earlier.[1]

Another example of a shield of many quarterings is the coat of arms of the Powys-Lybbe family, which contains 64 quarterings. Different rules apply in Scottish heraldry, and may well apply in other jurisdictions like Canada and South Africa.

Strict rules apply, both as to what arms may be displayed by way of quarterings, and the order in which they may be displayed. Men and women are always entitled to display the arms of their paternal line but are not usually entitled to display by way of quartering the arms of families from whom there is descent only through a female line (for example, the arms of a mother or grandmother or great-grandmother). An exception is made, however, if the female who breaks the male line of descent is a heraldic heiress. A heraldic heiress is a woman who has no brothers, or whose brothers have died without issue. Such a woman is entitled to transmit her father's arms to her own children, who add them as a quartering. If her father was himself entitled to one or more quarterings, these will pass to his daughters' children as quarterings as well. Quarterings are displayed in the order in which they are acquired by a family by marriage, starting with those acquired by the earliest marriage to bring in quarterings. It is permissible to omit quarterings, but if a quartering was brought in by a later quartering, it is essential to show the whole chain of quarterings leading to the quartering displayed, or else to omit the chain altogether.

The larger the number of quarterings, the smaller the space available for each coat of arms, so that most families entitled to many quarterings make a selection of those they ordinarily use. The Duke of Norfolk, for example, uses only four quarterings, although he is entitled to many more. In Scotland in some cases the plain unquartered coat is the more prized, as entitlement to its use can indicate who is chief of the name and arms and holds the headship of a clan. For example, Flora Fraser, Lady Saltoun of Abernethy has arms as chief of Fraser — the plain coat of 'azure, three fraises argent' — and a 'private' quartered coat. The Powys-Lybbe family appear, likewise, to usually use only the quarterings of Powys and Lybbe. However these are not true quarterings as the arms were changed in 1907 to be an impartible design of the two arms; the personal arms are precisely this design, with no quarterings despite its appearance. (If this were a quartering the following would apply: when only two different coats of arms are shown, each one is repeated twice in order to fill up the minimum number of four quarterings on such a display.) Prior to the 1907 change, the family did quarter their arms with Lybbe but with the Powys arms in the top left quarter as these were the family arms; the new design has Lybbe in the top left as Lybbe is the last part of the name.