From Infogalactic: the planetary knowledge core
Jump to: navigation, search
This article is about the mineral. For other uses, see Quartz (disambiguation).

Quartz is the second-most-abundant mineral in Earth's continental crust, after feldspar. Its crystal structure is a continuous framework of SiO4 silicon–oxygen tetrahedra, with each oxygen being shared between two tetrahedra, giving an overall chemical formula of SiO2.

There are many different varieties of quartz, several of which are semi-precious gemstones. Since antiquity, varieties of quartz have been the most commonly used minerals in the making of jewelry and hardstone carvings, especially in Europe and the Middle East.

The Ancient Greeks referred to quartz as κρύσταλλος (krustallos) derived from the Ancient Greek κρύος (kruos) meaning "icy cold", because some philosophers (including Theophrastus) apparently believed the mineral to be a form of supercooled ice.[8] Today, the term rock crystal is sometimes used as an alternative name for the purest form of quartz.

Quartz belongs to the trigonal crystal system. The ideal crystal shape is a six-sided prism terminating with six-sided pyramids at each end. In nature quartz crystals are often twinned, distorted, or so intergrown with adjacent crystals of quartz or other minerals as to only show part of this shape, or to lack obvious crystal faces altogether and appear massive. Well-formed crystals typically form in a 'bed' that has unconstrained growth into a void; usually the crystals are attached at the other end to a matrix and only one termination pyramid is present. However, doubly terminated crystals do occur where they develop freely without attachment, for instance within gypsum. A quartz geode is such a situation where the void is approximately spherical in shape, lined with a bed of crystals pointing inward.

α-quartz crystallizes in the trigonal crystal system, space group P3121 and P3221 respectively. β-quartz belongs to the hexagonal system, space group P6222 and P6422, respectively.[9] These space groups are truly chiral (they each belong to the 11 enantiomorphous pairs). Both α-quartz and β-quartz are examples of chiral crystal structures composed of achiral building blocks (SiO4 tetrahedra in the present case). The transformation between α- and β-quartz only involves a comparatively minor rotation of the tetrahedra with respect to one another, without change in the way they are linked.

Varieties (according to color) 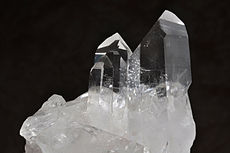 Clear rock crystals on a white base

Pure quartz, traditionally called rock crystal or clear quartz, is colorless and transparent or translucent, and has often been used for hardstone carvings, such as the Lothair Crystal. Common colored varieties include citrine, rose quartz, amethyst, smoky quartz, milky quartz, and others. 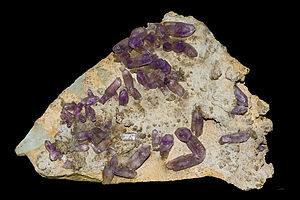 Amethyst is a popular form of quartz that ranges from a bright to dark or dull purple color. The world's largest deposits of amethysts can be found in Brazil, Mexico, Uruguay, Russia, France, Namibia and Morocco. Sometimes amethyst and citrine are found growing in the same crystal. It is then referred to as ametrine. An amethyst is formed when there is iron in the area where it was formed. 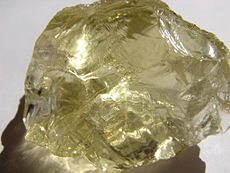 Citrine is a variety of quartz whose color ranges from a pale yellow to brown due to ferric impurities. Natural citrines are rare; most commercial citrines are heat-treated amethysts or smoky quartzes. However, a heat-treated amethyst will have small lines in the crystal, as opposed to a natural citrine's cloudy or smokey appearance. It is nearly impossible to tell cut citrine from yellow topaz visually, but they differ in hardness. Brazil is the leading producer of citrine, with much of its production coming from the state of Rio Grande do Sul. The name is derived from Latin citrina which means "yellow" and is also the origin of the word "citron." Sometimes citrine and amethyst can be found together in the same crystal, which is then referred to as ametrine.[11] Citrine has been referred to as the "merchant's stone" or "money stone", due to a superstition that it would bring prosperity.[12] 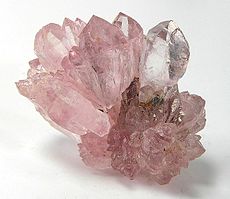 Rose quartz is a type of quartz which exhibits a pale pink to rose red hue. The color is usually considered as due to trace amounts of titanium, iron, or manganese, in the massive material. Some rose quartz contains microscopic rutile needles which produces an asterism in transmitted light. Recent X-ray diffraction studies suggest that the color is due to thin microscopic fibers of possibly dumortierite within the massive quartz.[13]

Additionally, there is a rare type of pink quartz (also frequently called crystalline rose quartz) with color that is thought to be caused by trace amounts of phosphate or aluminium. The color in crystals is apparently photosensitive and subject to fading. The first crystals were found in a pegmatite found near Rumford, Maine, USA and in Minas Gerais, Brazil.[14] 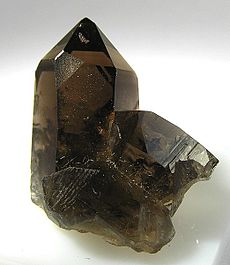 Smoky quartz from the Alps

Smoky quartz is a gray, translucent version of quartz. It ranges in clarity from almost complete transparency to a brownish-gray crystal that is almost opaque. Some can also be black. 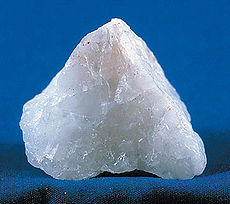 Milk quartz or milky quartz is the most common variety of crystalline quartz. The white color is caused by minute fluid inclusions of gas, liquid, or both, trapped during crystal formation, making it of little value for optical and quality gemstone applications.[15]

Varieties (according to microstructure) 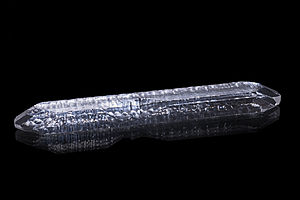 A synthetic quartz crystal grown by the hydrothermal method, about 19 cm long and weighing about 127 grams

Not all varieties of quartz are naturally occurring. Some clear quartz crystals can be treated using heat or gamma-irradiation to induce color where it would not otherwise have occurred naturally. Susceptibility to such treatments depends on the location from which the quartz was mined.[16] Prasiolite, an olive colored material, is produced by heat treatment; natural prasiolite has also been observed in Lower Silesia in Poland. Although citrine occurs naturally, the majority is the result of heat-treated amethyst. Carnelian is widely heat-treated to deepen its color.

Because natural quartz is often twinned, synthetic quartz is produced for use in industry. Large, flawless, single crystals are synthesized in an autoclave via the hydrothermal process; emeralds are also synthesized in this fashion.

Like other crystals, quartz may be coated with metal vapors to give it an attractive sheen.

Quartz is a defining constituent of granite and other felsic igneous rocks. It is very common in sedimentary rocks such as sandstone and shale and is also present in variable amounts as an accessory mineral in most carbonate rocks. It is a common constituent of schist, gneiss, quartzite and other metamorphic rocks. Quartz has the lowest potential for weathering in the Goldich dissolution series and consequently it is very common as a residual mineral in stream sediments and residual soils.

While the majority of quartz crystallizes from molten magma, much quartz also chemically precipitates from hot hydrothermal veins as gangue, sometimes with ore minerals like gold, silver and copper. Large crystals of quartz are found in magmatic pegmatites. Well-formed crystals may reach several meters in length and weigh hundreds of kilograms.

Naturally occurring quartz crystals of extremely high purity, necessary for the crucibles and other equipment used for growing silicon wafers in the semiconductor industry, are expensive and rare. A major mining location for high purity quartz is the Spruce Pine Gem Mine in Spruce Pine, North Carolina, United States.[17]

The largest documented single crystal of quartz was found near Itapore, Goiaz, Brazil; it measured approximately 6.1×1.5×1.5 m and weighed more than 44 tonnes.[18] 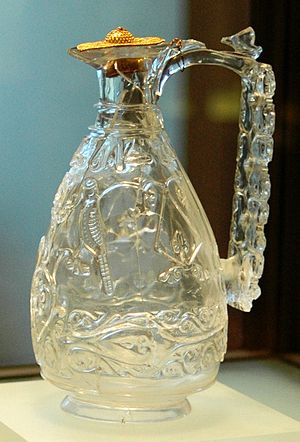 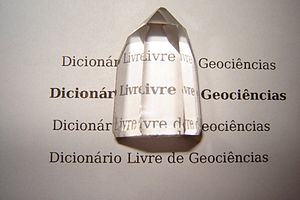 The word "quartz" comes from the German

Quarz (help·info),[19] which is of Slavic origin (Czech miners called it křemen). Other sources attribute the word's origin to the Saxon word Querkluftertz, meaning cross-vein ore.[20]

Quartz is the most common material identified as the mystical substance maban in Australian Aboriginal mythology. It is found regularly in passage tomb cemeteries in Europe in a burial context, such as Newgrange or Carrowmore in Ireland. The Irish word for quartz is grian cloch, which means 'stone of the sun'. Quartz was also used in Prehistoric Ireland, as well as many other countries, for stone tools; both vein quartz and rock crystal were knapped as part of the lithic technology of the prehistoric peoples.[21]

While jade has been since earliest times the most prized semi-precious stone for carving in East Asia and Pre-Columbian America, in Europe and the Middle East the different varieties of quartz were the most commonly used for the various types of jewelry and hardstone carving, including engraved gems and cameo gems, rock crystal vases, and extravagant vessels. The tradition continued to produce objects that were very highly valued until the mid-19th century, when it largely fell from fashion except in jewelry. Cameo technique exploits the bands of color in onyx and other varieties.

Roman naturalist Pliny the Elder believed quartz to be water ice, permanently frozen after great lengths of time.[22] (The word "crystal" comes from the Greek word κρύσταλλος, "ice".) He supported this idea by saying that quartz is found near glaciers in the Alps, but not on volcanic mountains, and that large quartz crystals were fashioned into spheres to cool the hands. This idea persisted until at least the 17th century. He also knew of the ability of quartz to split light into a spectrum.

In the 17th century, Nicolas Steno's study of quartz paved the way for modern crystallography. He discovered that regardless of a quartz crystal's size or shape, its long prism faces always joined at a perfect 60° angle.[23]

Quartz's piezoelectric properties were discovered by Jacques and Pierre Curie in 1880.[24][25] The quartz oscillator or resonator was first developed by Walter Guyton Cady in 1921.[26][27] George Washington Pierce designed and patented quartz crystal oscillators in 1923.[28][29][30] Warren Marrison created the first quartz oscillator clock based on the work of Cady and Pierce in 1927.[31]

Efforts to synthesize quartz began in the mid nineteenth century as scientists attempted to create minerals under laboratory conditions that mimicked the conditions in which the minerals formed in nature: German geologist Karl Emil von Schafhäutl (1803–1890)[32] was the first person to synthesize quartz when in 1845 he created microscopic quartz crystals in a pressure cooker.[33] However, the quality and size of the crystals that were produced by these early efforts were poor.[34] By the 1930s, the electronics industry had become dependent on quartz crystals. The only source of suitable crystals was Brazil; however, World War II disrupted the supplies from Brazil, so nations attempted to synthesize quartz on a commercial scale. German mineralogist Richard Nacken (1884–1971) achieved some success during the 1930s and 1940s.[35] After the war, many laboratories attempted to grow large quartz crystals. In the United States, the U.S. Army Signal Corps contracted with Bell Laboratories and with the Brush Development Company of Cleveland, Ohio to synthesize crystals following Nacken's lead.[36][37] (Prior to World War II, Brush Development produced piezoelectric crystals for record players.) By 1948, Brush Development had grown crystals that were 1.5 inches (3.8 cm) in diameter, the largest to date.[38][39] By the 1950s, hydrothermal synthesis techniques were producing synthetic quartz crystals on an industrial scale, and today virtually all the quartz crystal used in the modern electronic industry is synthetic.

Quartz crystals have piezoelectric properties; they develop an electric potential upon the application of mechanical stress. An early use of this property of quartz crystals was in phonograph pickups. One of the most common piezoelectric uses of quartz today is as a crystal oscillator. The quartz clock is a familiar device using the mineral. The resonant frequency of a quartz crystal oscillator is changed by mechanically loading it, and this principle is used for very accurate measurements of very small mass changes in the quartz crystal microbalance and in thin-film thickness monitors.