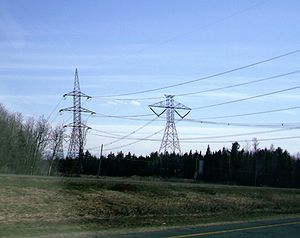 450kV HVDC line (at right), on south side of Autoroute 20 east of the Nicolet station near Sainte-Eulalie, Quebec.

The Quebec – New England Transmission (officially known in Quebec as the Réseau multiterminal à courant continu (RMCC)[1] and also known as Phase I / Phase II[2] and the Radisson - Nicolet - Des Cantons circuit[3]) is a long-distance high-voltage direct current (HVDC) line between Radisson, Quebec and Sandy Pond in Ayer, Massachusetts. As of 2012, it remains one of only two Multi-terminal HVDC systems in the world (the other one being the Sardinia–Corsica–Italy system, completed in the same year) and is "the only multi-terminal bipole HVDC system in the world where three stations are interconnected and operate under a common master control system".[4]

Initially, the Quebec – New England Transmission consisted of the 172 km (107 mi) section between the Des Cantons station near Windsor, Quebec and the Frank D. Comerford Dam near Monroe, New Hampshire which, because of the asynchronous operation of the American and Québec power grids, had to be implemented as HVDC. This bipolar electricity transmission line is overhead for its whole length except the crossing of Saint Lawrence river, went into service in 1986. It could transfer a maximum power of 690 megawatts. The operating voltage was ±450kV[5] or 900 kV from line to line.

The line crosses the Saint Lawrence River between Grondines and Lotbinière via an underground tunnel.[6][not in citation given] Until the tunnel was built, the line crossed the river via an overhead lattice tower electricity pylon—portions of one of these towers would later be used as part of the observation tower at La Cité de l'Énergie in Shawinigan.[citation needed]

In December 2008, Hydro-Québec, along with American utilities Northeast Utilities (parent company of Public Service of New Hampshire) and NSTAR (parent company of Boston Edison), created a joint venture to build a new HVDC line from Windsor, Quebec to Deerfield, New Hampshire, with an HVDC converter terminal built in Franklin, New Hampshire.[7] Hydro-Québec will own the segment within Quebec, while the segment within the US will be owned by Northern Pass Transmission LLC, a partnership between Northeast Utilities (75%) and NSTAR (25%).[8] Estimated to cost US$1.1 billion to build,[9] it is projected that the line will either run in existing right-of-way adjacent to the HVDC line that runs through New Hampshire, or it will connect to a right-of-way in northern New Hampshire that will run through the White Mountains. This 180-to-190-mile (290 to 310 km) line, projected to carry 1,200 megawatts, will bring electricity to approximately one million homes.[10]

In order to go ahead, the project must receive regulatory approval in Quebec and the United States. The proposed transmission line could be in operation in 2015.[11] According to Jim Robb, a senior executive from Northeast Utilities, New England could meet one third of its Regional Greenhouse Gas Initiative commitments with the hydropower coming through this new power line alone.[12]

The purchase of power from Hydro-Québec was an issue during the Massachusetts gubernatorial election of 2010.[14]

Important waypoints of the line.

In 2004, shortly before U.S. President George W. Bush's visit to Canada, a tower along the Quebec – New England Transmission circuit in the Eastern Townships near the Canada-U.S. border was damaged by explosive charges detonated at its base. The CBC reported that a message, purportedly from the Résistance internationaliste and issued to the La Presse and Le Journal de Montréal newspapers and CKAC radio, stated that the attack had been carried out to "denounce the 'pillaging' of Quebec's resources by the United States."[3][16]

In November 2015, the Sierra Club of New Hampshire expressed opposition for the new line, saying that it it would not only benefit Connecticut and Massachusetts residents more than those in New Hampshire, but also the concern of the flooding of Boreal forests during the construction of Hydro-Québec's dams in northern Quebec, disputes with the Innu First Nations, and the effects of tourism and the environment within the White Mountain National Forest.[17]