Speech from the throne 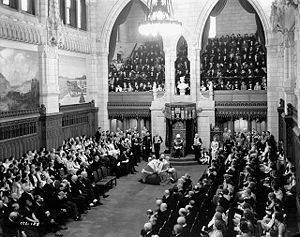 A speech from the throne (or throne speech) is an event in certain monarchies in which the reigning sovereign, or a representative thereof, reads a prepared speech to the members of parliament when a session is opened, outlining the government's agenda for the session. The speech is prepared by the ministers of the crown in cabinet. The event is often held annually, although in some places it may occur more or less frequently, whenever a new session of parliament is opened. Many republics have adopted a similar practice in which the head of state, often a president, addresses the legislature; for example, in the United States, the president makes an annual State of the Union address.

Historically, when monarchs exercised personal power in government, a speech from the throne would outline the policies and objectives of the monarch; as such the speech was usually prepared by the monarch's advisers, but the monarch supervised the drafting of the speech at least to some extent and exercised final discretion as to its content. In constitutional monarchies today, whether by law or by convention, the head of state (or representative thereof) reads the Speech From the Throne, but it is prepared by the ministers of the crown in cabinet. The address sets forth the government's priorities with respect to its legislative agenda, for which the cooperation of parliament is sought. 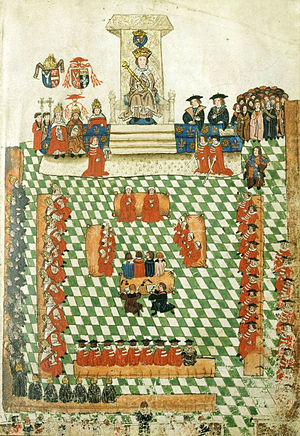 King Henry VIII at the opening of the Parliament of England at Bridewell Palace, 1523

In the United Kingdom, the speech is known as Her Majesty's Most Gracious Speech, the Gracious Address, or, less formally, the Queen's Speech (or King's Speech, when the reigning monarch is male). In Canada, it is often shortened to Throne Speech (in French: Discours du Trône). Since 1973, the Lieutenant Governor of Quebec has delivered a short inaugural address termed the Allocution, after which the premier reads his or her Discours d'ouverture (Opening Speech), called the Message inaugural from 1974 to 1984. In Australia, this speech is called the Governor's speech or opening speech.[citation needed]

In Hong Kong, the governor's address was termed the Policy Address during Chris Patten's governorship. In the Irish Free State, the governor-general delivered the Governor-General's Address to Dáil Éireann; only two were ever given, in 1922 and 1923.

In the Commonwealth realms, the Speech From the Throne is an oration that forms part of a ceremony marking the opening of parliament.[1] Some records indicate the ceremony has taken place since the Medieval era,[2] while others place its origins in the 16th century,[3] when England was an absolute monarchy.[4] The speech explained to parliament the reasons it was summoned and sometimes set out the sovereign's policies and objectives.[5] The monarch would sometimes speak to parliament in person; King Edward III (in 1365), Richard II, and Edward IV (to both houses of parliament on multiple separate occasions) did so.[5] However, various other figures gave the oration on the sovereign's behalf: between 1347 and 1363, it was read by the Chief Justice; by the Chief Justice of the Common Pleas in 1401; the Archbishop of Canterbury in 1344, 1368, 1377 (speaking for a presiding Edward III[5]), 1399, and 1422; and in 1343, 1363, and, usually after 1368, by the Lord Chancellor[2][6]—who was then the Prolocutor, or chairman of the House of Lords. It was given on his behalf by the Bishop of Winchester in 1410; in 1453 and 1467, the Bishop of Lincoln; the Bishop of Rochester in 1472; and the Keeper of the Privy Seal in 1431.[6] It may have been written by or with the input of the king or queen's advisers, but, the monarch, as supreme governor, was the principal author.[citation needed]

In the United Kingdom, the speech is typically read by the reigning sovereign at the State Opening of Parliament. Traditions surrounding the Opening and the speech go back to the 16th century; the present ceremony dates from 1852, when the Palace of Westminster was rebuilt after the 1834 fire. The ceremony now occurs annually in May (prior to the Fixed-term Parliaments Act 2011 it was usually in November or December) or soon after a general election.[11] The monarch may, however, appoint a delegate to perform the task in his or her place; Queen Elizabeth II did this in 1959 and 1963, when she was pregnant with Prince Andrew and Prince Edward respectively, the Lord Chancellor delivering the address instead.

In those countries that share with the UK the same person as their respective sovereign, the Speech From the Throne will usually be read on the monarch's behalf by his or her viceroy, the governor-general, although the monarch may deliver the address in person: Queen Elizabeth II read the Throne Speech in the Parliament of New Zealand in 1954, the Parliament of Australia in 1954 and 1974,[12] and the Parliament of Canada in 1957 and 1977. Another member of the Royal Family may also perform this duty, such as when, on 1 September 1919, Prince Edward, Prince of Wales (later King Edward VIII), read the Speech From the Throne in the Canadian parliament. On two occasions, the Administrator of the Government delivered the address to the Parliament of Canada: 16 May 1963 and 30 September 1974.[13] 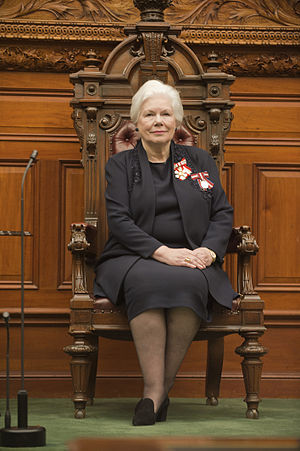 Lieutenant Governor of Ontario Elizabeth Dowdeswell on the throne of the Legislative Assembly of Ontario, from where she delivers the Speech From the Throne

In the Australian states, the relevant governor reads the speech, though, the Australian monarch may also perform the task: Queen Elizabeth II opened the parliaments of some of the Australian states in 1954 and of New South Wales in 1992. In almost all the Canadian provinces, the relevant lieutenant governor delivers the speech; it is uncertain whether the Canadian monarch can do the same in any legislature of a Canadian province. At the Provincial level in Canada, only in Quebec is the speech not referred to as the Speech From the Throne.

In British overseas territories that have instituted this practice, the relevant governor delivers the speech. A throne speech is not typical in the devolved legislatures within the United Kingdom, the nearest equivalent being a statement of the legislative agenda of the executive branch usually given by a first minister.[14] However, the British monarch often undertakes visits and speaks to the devolved bodies in a less official capacity. So far, Queen Elizabeth II has been present and has given an address at all openings of the Scottish parliament, usually speaking reflectively upon its accomplishments and wishing the institution well for its coming term rather than considering the plans of the executive. In each of the Canadian territories, the commissioner reads the Throne Speech or Opening Address to the legislature.

It is considered improper for the audience, including members of parliament, to show support or disapproval for any content of the speech while it is being read as such is reserved to the debate and vote that follows in both houses or the one house of parliament.[15] Formally, the motion merely calls on parliament to thank the monarch or viceroy for the speech via an Address in Reply. The debate is, however, often wide-ranging, exploring many aspects of the government's proposed policies, and spread over several days. When the Address in Reply is eventually voted on, the poll is held to constitute a motion of confidence in the government, which, if lost, would result in the end of that government's mandate.[16] In some legislatures, this discussion and vote follows a symbolic raising of other matters, designed to highlight the independence of parliament from the Crown; a practice that originated after King Charles I was tried and executed by parliament.[17] In the British House of Commons, the other business raised is by tradition the Outlawries Bill. In the Canadian House of Commons, the bill considered is Bill C-1, an Act Respecting the Administration of Oaths of Office,[18] while in the Senate, it is Bill S-1, an Act Relating to Railways.[19] In Australia and New Zealand, by contrast, no pro forma bills are introduced; there, the respective houses of representatives instead consider some brief and non-controversial business items before debating the Address in Reply.[20][21] 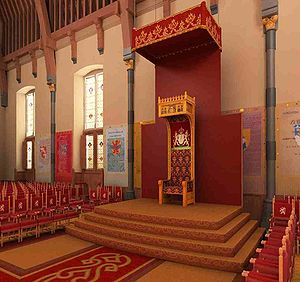 The throne of the Ridderzaal, from which the monarch of the Netherlands delivers the Throne Speech on the Prince's Day

Other monarchies, such as the Netherlands (Prince's Day) and Norway, have very similar throne speech ceremonies.

In Japan, the Emperor makes only a short speech of greeting during the Diet opening ceremony;[22] he does not refer to any government policies, instead allowing the prime minister to address political matters. Similarly, in Sweden, since the mid-1970s, the monarch, at the request of the Speaker of the Riksdag, gives a short symbolic address ending with the monarch declaring the annual session of the Riksdag (Swedish: Riksmötet) to be opened, and is immediately followed by the prime minister's statement of government agenda (Swedish: Regeringsförklaring) for the forthcoming legislative year.[23]

In Thailand, the monarch makes a speech at a joint session in the Ananta Samakhom Throne Hall, advising the National Assembly in their work. Malaysia also has the same practice, with the Yang di-Pertuan Agong making such an address to the Parliament of Malaysia in joint session during its state opening yearly every March.