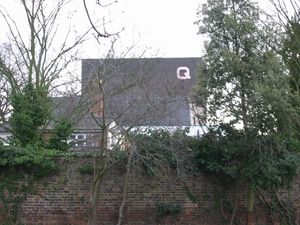 The Queen's Theatre is a 500-seat theatre located in Hornchurch in the London Borough of Havering, east London.

The theatre opened in its current purpose-built site on Billet Lane, Hornchurch in 1975.

From 1953 to 1975 the theatre had occupied a converted, and for some time derelict, cinema on Station Lane. The theatre originally opened in the coronation year of Queen Elizabeth II and its name reflects this.

The Arts Council of England provide funding for the theatre and it is also a registered charity.

The Queen's is home to 'cut to the chase...' a resident company of actor musicians who appear in seven main house productions and a pantomime as well as appearing in Theatre in Education tours.

Adjacent to the theatre is an open space called Queen's Green.