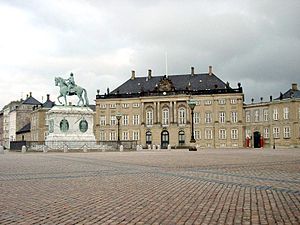 Anne-Marie was educated at Zahle's School in Denmark from 1952 to 1961. In 1961 she attended the Chatelard School for Girls, an English boarding school outside Montreux in Switzerland. In 1963 and 1964 she attended the Institut Le Mesnil, a Swiss finishing school also in Montreux.

In 1959, at the age of thirteen, Anne-Marie first met her future husband, her triple third cousin Constantine, Crown Prince of Greece, who accompanied his parents, King Paul and Queen Frederica, on a state visit to Denmark. They met a second time in Denmark in 1961, when Constantine declared to his parents his intention to marry Anne-Marie. They met again in Athens in May 1962 at the marriage of Constantine's sister Princess Sophia of Greece and Denmark to Prince Juan Carlos of Spain at which Anne-Marie was a bridesmaid: and again in 1963 at the centenary celebrations of the Greek monarchy. The King and Queen with their youngest children, by Allan Warren

On 6 March 1964, King Paul died, and Constantine succeeded him as King of the Hellenes. In July 1964, the announcement of the engagement of Constantine and Anne-Marie raised the polite protests of the Left in Denmark.[2] Anne-Marie and Constantine were married on 18 September 1964 (two weeks after Anne-Marie's 18th birthday) in the Metropolis, the Greek Orthodox Cathedral of Athens. The bride wore a Jørgen Bender design.[3] The couple has five children.

Anne-Marie and her husband Constantine are third cousins: they share King Christian IX of Denmark as patrilineal great-great-grandfather. They also share Queen Victoria of the United Kingdom of Great Britain and Ireland as a great-great-grandmother.

As Queen of Greece, Anne-Marie spent much of her time working for a charitable foundation known as "Her Majesty's Fund" which provided assistance to people in rural areas of Greece.

In December 1967 Anne-Marie’s husband King Constantine attempted a counter-coup against the military junta which had been sworn in by himself after a successful coup during the previous April. The counter-coup failed and Anne-Marie and her family had to flee to Italy. During the aftermath, Anne-Marie miscarried a child.[4] The family lived for two months in the Greek embassy and then for the next five years in a house in a suburb of Rome.

In 1973 Anne-Marie moved with her family to England. They lived first in Chobham in Surrey. Later they moved to the London suburb of Hampstead where they continue to live. The Greek government seized their former private home of Tatoi. It was only after a successful appeal to the European Court of Human Rights that the Greek government were forced to pay compensation for the property. King Constantine has used the money obtained to set up the Anne-Marie Foundation. 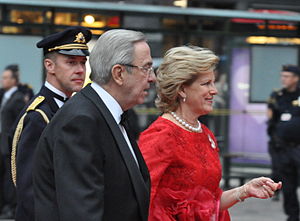 The King and Queen in Stockholm, at the celebrations of the wedding of Victoria, Crown Princess of Sweden, June 2010.

In 1980 Anne-Marie and Constantine founded Hellenic College of London, a bilingual school where her own children were educated. She is currently honorary chairman of the school.

The government of Greece did not permit Anne-Marie to return to Greece until 1981 when she was allowed to enter Greek territory for several hours to attend the funeral of her mother-in-law, Queen Frederika. She and her family paid a private visit to Greece in 1993. Since 2003 – when the property dispute between her husband Constantine and the government of Greece concluded – Anne-Marie has visited Greece numerous times.

In 2003 Anne-Marie and her husband established the Anna-Maria Foundation with the money reimbursed to them by the government of Greece for the appropriation of their private property. The foundation provides aid to victims of natural disasters, including earthquakes and floods, in Greece. Anne-Marie serves as president of the foundation.

On 21 May 2004 Anne-Marie was peripherally involved in a dispute in Madrid between former Crown Prince Vittorio Emanuele of Italy and his cousin and dynastic rival Prince Amedeo of Savoy-Aosta. At a soirée held at the Zarzuela Palace during the wedding celebrations of Felipe, Prince of Asturias, Amedeo approached Vittorio who reportedly punched him twice in the face, causing him to stumble backward down the steps.[5] The quick intervention of Anne-Marie, who propped him up, prevented Amedeo from falling to the ground. She discreetly assisted him indoors while stanching his bleeding facial wounds until first aid was administered.[5] Upon learning of the incident Spain's King Juan Carlos, a cousin of both men, reportedly declared that "never again" would an opportunity to abuse his hospitality be afforded the competing pretenders.[5] Anne-Marie's quick action avoided what might have been more serious injury to Amedeo.

On 14 August 2004 Anne-Marie and her husband Constantine visited their former home in Athens, the former Royal Palace now the Presidential Palace, for the first time since 1967. They were received by then President of Greece Costis Stephanopoulos along with other members of the International Olympic Committee (of which Constantine is an honorary member). In December 2004 Constantine, Anne-Marie and their children were again invited to pay a personal private visit by President Stephanopoulos.

She is titular Queen of Greece (Queen of the Hellenes) since 1974. This title is not recognized under the terms of the republican Constitution of Greece.[6]