From Infogalactic: the planetary knowledge core
Jump to: navigation, search
For the old hospital of the same name, see Queen Elizabeth Hospital Birmingham (1933–2010).

The Queen Elizabeth Hospital Birmingham is an NHS hospital in the Edgbaston area of Birmingham, situated very close to the University of Birmingham. The hospital, which cost £545 million to construct, opened in June 2010, replacing the previous Queen Elizabeth Hospital and Selly Oak Hospital. The Trust employs more than 6,900 staff and provides adult services to more than half a million patients every year.

It is named after Queen Elizabeth The Queen Mother, who was queen consort and wife of King George VI from 1936 until his death in 1952.

The hospital provides a whole range of services including secondary services for its local population and regional and national services for the people of the West Midlands and beyond. The hospital has the largest solid organ transplantation programme in Europe. It has the largest renal transplant programme in the United Kingdom[1] and it is a national specialist centre for liver, heart and lung transplantation, as well as cancer studies. The hospital has the largest single-floor critical care unit in the world, with 100 beds, and is the home of the Royal Centre for Defence Medicine for military personnel injured in conflict zones. It is also a regional centre for trauma and burns. The hospital is served by University station which is a five-minute walk away.

With over 1,000 beds, QEHB is the largest single-site NHS hospital in the United Kingdom, and also boasts Europe's largest critical care unit with over 100 critical care beds. 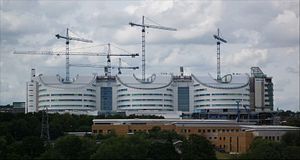 New hospital whilst under construction 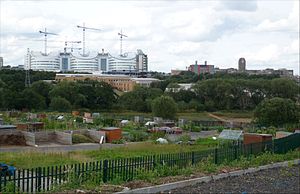 Services from Selly Oak hospital moved in during the week beginning 16 June 2010, and services from the old Queen Elizabeth Hospital finished moving in November 2011. For the Trust this allows simplification of operation due to two hospitals being relocated to one single site, which has the same capacity as the two previous hospitals combined.[4]

The hospital is now the new home of the Royal Centre for Defence Medicine, which cares for injured service men and women from conflict zones, as well as training Army, Navy and Air Force medical staff.[5]

The new hospital cost a total of £545 million, and is part of a £1 billion urban regeneration plan for Bournbrook and Selly Oak which includes the construction of a £350 million retail development and the construction of the Selly Oak bypass. Plans for the new hospital were unveiled in 1998[6] and were approved by Birmingham City Council in October 2004[7] after the design was unveiled earlier that year.[8] The hospital is the first acute hospital to be built in Birmingham since 1937.[9]

The new building is part of a Private Finance Initiative with Consort Healthcare Ltd. There were problems with the scheme when plans for Consort to sign the deal fell through in March 2005. A deal was signed in early 2006.[10]

The first part to be completed was the £12 million multi-storey car park. A further £30 million was spent on preparing the site for construction. The finished complex comprises three 63-metre-tall towers, each 9 stories tall.[12] A sky-bridge leads from one of the towers to the retained estate containing the departments of oncology, the pharmacy and the Wellcome Research Centre.[13] As well as providing patient care, the hospital includes an education centre and retail outlets. The main atrium has a glass roof.[14]

The original Queen Elizabeth Hospital was an NHS hospital in the Edgbaston area of Birmingham situated very close to the University of Birmingham.

Origins of the hospital and the medical school

A variety of charitable hospitals opened in Birmingham between 1817, when the Orthopaedic Hospital opened, and 1881, when the Skin Hospital served its first patients. One of these, Queens Hospital, established in 1840 by a young local surgeon William Sands Cox, was predominantly for clinical instruction for the medical students of Birmingham. In 1884 these institutions, including Cox’s medical school, united as part of Mason College, which later became the University of Birmingham in 1900, and moved to its new campus in Edgbaston. In 1922, Alderman W. A. Cadbury opposed the extension of the General Hospital in the city centre, and a new hospital in Edgbaston was proposed. Five years later an Executive Board for the building of this hospital, at an estimated cost of £1,000,000, was formed. Around five-sixths of the money was to be dedicated to the hospital and one sixth to the University for the construction of the Medical School and in 1929 plans were drawn up for a 600-bed centre that would encourage clinical teaching of medicine, surgery, therapeutics, midwifery, diseases of women, ophthalmology, ENT, orthopaedics, dermatology, venereal disease and radiology. Britain was then in a period of financial crisis and there was controversy over the expense so in April 1930 an appeal to build the Queen Elizabeth Hospital was launched and by the following year donations exceeded £600,000 enabling construction to start in 1933. The building ultimately cost £1,029,057, which was £129,406 less than the money raised by donations.[17]

Those reported to have been treated there include:

In December 2013, the hospital suspended a surgeon over allegations he branded his initials onto a patient's liver.[21] In the same month, a nurse at the hospital was suspended from the medical register when a panel at the Nursing and Midwifery Council proved more than 70 charges of incompetency.[22]