From Infogalactic: the planetary knowledge core
(Redirected from Queen of León)
Jump to: navigation, search
For the musical group, see Kings of Leon. 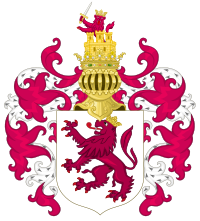 Coat of arms of León with the Royal Crest.

In the reign of Ordoño I of Asturias (850–866), the kingdom began to be known as that of León. In 910, an independent Kingdom of León was founded when the king of Asturias divided his territory amongst his three sons.

Below follows a list of Leonese monarchs. It is, in part, a continuation of the list of Asturian monarchs.

The follow dynasts are descendants, in the male line, of Urraca's husband, Raymond of Burgundy.

Henry II was the illegitimate son of Alfonso XI. He was made duke of Trastámara.