John Quinlan Terry CBE (born 24 July 1937 in Hampstead, London, England) is a British architect. He was educated at Bryanston School and the Architectural Association. He was a pupil of architect Raymond Erith, with whom he formed the partnership Erith & Terry.

Terry is a well-known representative of New Classical Architecture. He continues to practice with his son Francis Terry at the joint Quinlan and Francis Terry LLP. 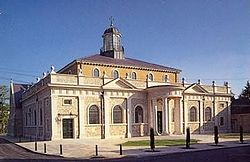 Quinlan Terry works principally in classical Palladian architectural styles. The website of the firm of Quinlan and Francis Terry LLP states that the firm continues the architectural style of the practice which was started by Raymond Erith in 1928, and specialises in high quality traditional building mostly in Classical idioms. The practice is based in Dedham, Essex and employs between 15 and 20 staff. A book by David Watkin entitled Radical Classicism: The Architecture of Quinlan Terry (New York: Rizzoli International Publications) was published in 2006.

The first work by the older man on which the younger Terry had a major role was the new house Kings Waldenbury, Hertfordshire, completed for the Pilkington family in 1971 when new building in a classical manner was deeply unfashionable. During the three year construction period of the house Terry kept a diary published later in which he bemoans the modern world and stoically defends his conservative, reformed, evangelical faith.[1]

His design for the 1992 Maitland Robinson Library[2] at Downing College, Cambridge won the Building of the Year Award in 1994. One of his best known works is Brentwood Cathedral in Essex. This is radical extension of a nineteenth century Roman Catholic Gothic revival church is in the English Baroque manner owing much to James Gibbs and Thomas Archer and makes little or no attempt to be in keeping with the older building. Terry's new work has a portico based on the south portico of St Paul's cathedral designed by Sir Christopher Wren. Unusually, all five classical orders of architecture were used and Terry has said in lectures that he views classical architecture as an expression of the Divine order.

During the 1980s he was also appointed by Margaret Thatcher, then Prime Minister, to renovate the interiors of 10 Downing Street, restored 40 years previously by Raymond Erith, Terry's teacher, after war damage. Terry's work there is more assertive than Erith's. In Gloucestershire, he designed Waverton House, where he used the style made popular by Matthew Brettingham in the late 18th century, featuring a central staircase lit from above, surrounded by rooms on both floors.

In 1989, he designed a series of three new villas for the Crown Estate Commissioners in Outer Circle in London's Regent's Park. Building in the Park was controversial but said to be in the spirit of the Prince Regent's original though unrealised intentions for the Park, which was to contain numerous villas for Regency courtiers surrounding a new Royal palace. Terry's three new villas have near identical plans, based on Palladio's Villa Saraceno, but the external elevations vary showing respectively Gothic, Italian Mannerist and muscular Neo-classical features in the manner of William Chambers. Six villas were eventually built between 1989 and 2002.

In the mid-1990s, Terry designed the restoration of St Helen's Bishopsgate, controversially turning the orientation of the medieval church through 90 degrees, moving or removing some fittings, and reworking its previous Tractarian Anglican layout into a Georgian stripped-back meeting house plan informed by the precepts of Reformation theology, in tune with its current firmly evangelical congregation. Also in the 90's he design a Castle for the Barclay brothers in their private island of Becqhou. [3]

In the United States of America

His works in the US include the Abercrombie Residence. This classical mansion is based on Marble Hill House, Twickenham, UK. Complete with a piano nobile approached by an external staircase, it has a pediment supported by Corinthian columns. The house is constructed of Kasota limestone, with Indiana limestone dressings.

Terry's architecture has been championed by David Watkin, who wrote the monograph Radical Classicism: The Architecture of Quinlan Terry (2006), and by Roger Scruton who called it "one long breath of fresh air" in his article entitled "Hail Quinlan Terry: our greatest living architect"[4]

"Quinlan Terry is the single most distinguished and prolific architect at work in the Classical tradition in either Britain or the United States of America. He has attempted more completely than any other architect in Britain to pull the rug from beneath the false certainties of Modernism" – David Watkin Radical Classicism: The Architecture of Quinlan Terry (2006)

Terry has been called "our most controversial architect – precisely because he is so uncontroversial"[5] and his work has attracted much criticism even from conservative quarters. Gavin Stamp remarked that after the death of Raymond Erith, Terry was left "to hold aloft the torch of classicism—something he was, I fear, quite unfitted to sustain"[6] and he has also been called "exquisite but impractical."[7]

In 2003 Terry won the Best Modern Classical House 2003, awarded by the British Georgian Group for Ferne House in Wiltshire. In 2005 Terry won the 3rd Annual Driehaus Prize, the most prestigious award for outstanding classical and traditional architects. He holds the Philippe Rothier European Prize for the Reconstruction of the City of Archives d'Architecture Moderne (1982).

He was appointed Commander of the Order of the British Empire (CBE) in the 2015 New Year Honours for services to classical architecture.[8][9]

Terry has said that he enjoys working for American clients because:

...apart from the fact that [they] have got the money [they have] no moral hangups against building a building in an 'outdated style,' as they put it... To Americans, morality is morality, architecture is architecture. [10]