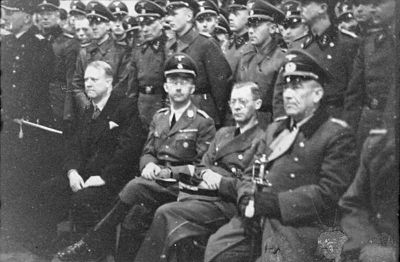 A quisling (/ˈkwɪzlɪŋ/; Norwegian pronunciation: [ˈkʋɪsˈlɪŋ]) is a person who collaborates with an enemy occupying force.[1][2][3] The word originates from the Norwegian war-time leader Vidkun Quisling, who headed a domestic Nazi collaborationist regime during the Second World War.

The first use of the term quisling in reference to followers of Vidkun Quisling was made by Norwegian Labour Party politician Oscar Torp, in a 2 January 1933 newspaper interview. Further uses of the term were made by Aksel Sandemose, in a Dagbladet article in 1934, and by the newspaper Vestfold Arbeiderblad, in 1936.[4] J.R.R Tolkien used the term in English in "On Fairy-Stories", a presentation given in 1939 and first printed in 1947.[5] The term was widely introduced to an English-speaking audience by the British newspaper The Times. It published an editorial on 19 April 1940 titled "Quislings everywhere", after the Norwegian Vidkun Quisling, who assisted Nazi Germany as it conquered his own country so that he could rule the collaborationist Norwegian government himself. The Daily Mail picked up the term four days after The Times editorial was published, by May The War Illustrated wrote of "potential Quislings" among the Dutch during the German invasion of the Netherlands, and the BBC brought the word into common use internationally.[6][7] The Times' editorial asserted: "To writers, the word Quisling is a gift from the gods. If they had been ordered to invent a new word for traitor... they could hardly have hit upon a more brilliant combination of letters. Aurally it contrives to suggest something at once slippery and tortuous."

The then Prime Minister of the United Kingdom Winston Churchill used the term during an address to the Allied Delegates at St. James's Palace on 21 June 1941, when he said:[8] "A vile race of Quislings—to use a new word which will carry the scorn of mankind down the centuries—is hired to fawn upon the conqueror, to collaborate in his designs and to enforce his rule upon their fellow countrymen while groveling low themselves." He used the term again in an address to both houses of Congress in the United States of America on 26 December 1941.[9] Commenting upon the effect of a number of Allied victories against Axis forces, and moreover the United States’ decision to enter the war, Churchill opined that; "Hope has returned to the hearts of scores of millions of men and women, and with that hope there burns the flame of anger against the brutal, corrupt invader. And still more fiercely burn the fires of hatred and contempt for the filthy Quislings whom he has suborned."[10] It subsequently entered the language, and became a target for political cartoonists.[11]

In the United States it was used often. Some examples: in the Warner Bros. film Edge of Darkness (1943) in reference to a traitorous villager, and in the Warner Bros. cartoon Tom Turk and Daffy (1944), uttered by a Thanksgiving turkey whose presence is betrayed to Porky Pig by Daffy Duck. Also, in a 1966 Peanuts comic strip, Linus tries to hide in Snoopy's doghouse only to have the beagle rat him out. "Traitor! Quisling! Squealer!" Linus shouts at Snoopy as his sister Lucy drags him away.

The word has also been applied to Communist figures who participated in the establishment of Communist rėgimes. As an illustration, the renegade socialist Zdenek Fierlinger of Czechoslovakia was frequently derided as "Quislinger" for his collaboration with the Communist Party of Czechoslovakia.[12]

The noun has survived and is still in current use. It appeared during 2008 and 2009 in articles in The New York Times,[13] Die Zeit[14] and The Times.[15] In contrast, the back-formed verb to quisle (/ˈkwɪzəl/), has largely disappeared from contemporary usage.[16] The verb seems to have fallen out of use comparatively quickly, since by early 1944 there was evidence that H.L. Mencken—generally considered to be a leading authority on the common English usage in the United States—was not aware that it already existed.[17] The back-formed verb to quisle also gave rise to a much less common version of the noun: quisler.[18]

In contemporary usage, quisling is synonymous with traitor, and particularly applied to politicians who appear to favour the interests of other nations or cultures over their own. In American English, the term is slightly less well known than the equivalent phrase Benedict Arnold.

When one removes the ⟨q⟩ and the ⟨i⟩ in quisling, the result is usling, Norwegian for wretch. "Vidkjent Usling" (widely-known wretch) was used more or less humorously during World War II in Norway.[19] Another joke was nicknaming the two-krone banknote Quisling, and the one-krone note an usling, hence there were two uslings to one Quisling.[20]

The term has been used in fiction to describe traitors and collaborators.

(and among the items listed for sale:)

(by the neck) / Crepe Suzettes to order."

House: You know, there’s a new biography of Quisling, I think you might like it.
Cuddy: Sure. No idea who that is.
House: Uh, Norwegian guy, World War II, traitor. The fact that I have to explain this kind of takes the edge off my flow.