From Infogalactic: the planetary knowledge core
(Redirected from Quivira and Cíbola)
Jump to: navigation, search

Quivira is a place named by explorer Francisco Vásquez de Coronado in 1541, for the mythical "Seven Cities of Gold" which he never found. The location of Quivira is believed by most authorities to be in central Kansas near present-day Lyons extending northeastern to Salina. The Quivirans were the forebears of the modern day Wichita Indians and Caddoan tribes, such as the Pawnee or Arikara. 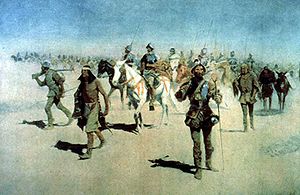 In 1539, the Spaniard, Francisco Vásquez de Coronado, led a large expedition north from Mexico to search for wealth and the "Seven Cities of Cibola". Instead of wealth, he found farming peoples living in an array of communities and villages in what are today Arizona and New Mexico. These were the Apache, Navajo, Hopi, Zuni, and Rio Grande Pueblo Indians of today.

As Coronado arrived at the Rio Grande, he was disappointed by the lack of wealth among the Pueblos, but he heard from an Indian (that the Spanish called "the Turk") of a wealthy civilization named "Quivira" far to the east, where the chief supposedly drank from golden cups hanging from the trees. Hearing of this, Coronado led his army of more than one thousand Spaniards and Indian aides onto the Great Plains in 1541. The Turk was his guide to Quivira.

On his journey, Coronado traversed the panhandle of Texas. He found two groups of Indians, the Querechos and the Teyas. He was heading southeast when the Teyas told him that the Turk was taking him the wrong direction and that Quivira was to the north. It appears the Turk was luring the Spaniards away from New Mexico with tales of wealth in Quivira, hoping perhaps that they would get lost in the vastness of the Plains. Coronado sent most of his slow-moving army back to New Mexico. With 30 mounted Spaniards, priests, Indian followers, the Turk, and Teya guides he had forced into service, he changed course northward in search of Quivira. After a march of more than thirty days, he found a large river, probably the Arkansas, and soon met several Indians hunting buffalo. They led him to Quivira.[1] 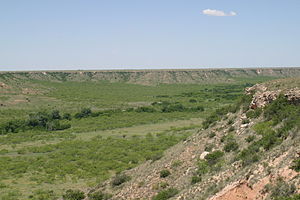 Coronado found the Teyas Indians in Blanco Canyon, east of present-day Lubbock, Texas. The Querechos lived on the flat Llano Estacado above the canyon.

Coronado found Quivira “well settled...The land itself being very fat and black and being very well watered by the rivulets and springs and rivers. I found prunes like those of Spain, and nuts and very good sweet grapes and mulberries.” It was, he said, the best land he had seen during his long trek north from Mexico.[2] Coronado spent 25 days in Quivira and traveled about 65 miles (25 leagues) from one end of the country to the other. He found nothing more than straw-thatched villages of up to two hundred houses each and fields of corn, beans, and squash. He found no gold, other than a single small piece which he reasoned had come into the natives' hands from a member of his own expedition.

A sketch of a Wichita Indian village in the 19th century. The beehive shaped grass-thatched houses surrounded by corn fields are characteristic and appear similar to those described by Coronado in 1541.

The Quivirans were simple people. Both men and women were nearly naked. They “were large people of good build” many of the men being over six feet tall. They seemed like giants compared to the Spaniards.[3]

Coronado was escorted to a farther boundary of Quivira, an area called "Tabas," where the neighboring land of Harahey began. He summoned the "Lord of Harahey" who, with two hundred followers, came to meet the Spanish. The Harahey Indians were "all naked—with bows and some sort of things on their heads, and their privy parts slightly covered. It was the same sort of place... and of about the same size as Quivira."[4] Disappointed at his failure to find wealth, Coronado turned his face toward New Mexico and marched back across the plains, met up with the rest of his army there, and the following year returned to Mexico. Before leaving Quivira, Coronado ordered the Turk strangled. The Coronado expedition had failed in its quest for gold.

Coronado left behind in New Mexico several Catholic priests and their helpers, including Friar Juan de Padilla. Padilla journeyed back to Quivira with a Portuguese assistant and several Christian Indians. The friar and most of his companions were soon killed by the Quivirans, apparently because he wished to leave their country to visit their enemies, the Guas. The Portuguese and one Indian survived to tell the story.[5]

In 1594, Francisco Leyba (Leyva) Bonilla and Antonio de Humana (Umana) made another attempt to find the Quivira of Coronado, even though it was denounced as unauthorized by Spanish officials. Only one Mexican Indian, Jusepe Gutierrez, returned from this journey. He related that Leyba had killed Umana in a quarrel and that he had deserted the expedition.

Following this, in 1601, the governor of New Mexico, Don Juan de Oñate, undertook another expedition in search of Quivira. He found settlements of the Escanjaque and Rayado Indians in Kansas or Oklahoma, but no gold or silver. He learned that the Leyba and other members of the Umana and Lebya expedition had been killed by Indians. In 1606, 800 of these "Quivirans" were said to have visited Oñate in New Mexico to trade.

Quivira is again mentioned in a 1634 expedition of Captain Alonzo Vaca who found it 300 leagues east of New Mexico (this suggests more than 1000 miles). Another expedition was undertaken in 1662 by Diego Dionisio de Penalosa, who allegedly found a large settlement he called a city, but an examination of his account by a modern scholar has concluded that the story is fanciful.[6] The enemies of the Quivirans in all these accounts were the Escanjaques. In 1675 and 1678 came "two Spanish royal orders for the conquest of Quivira".[7]

The location of Quivira and the identity of the Quivirans 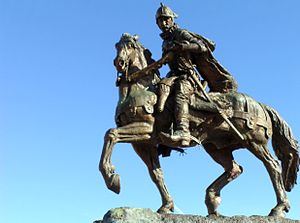 Juan de Oñate led an expedition to Quivira in 1601. Oñate was married to a granddaughter of Hernán Cortés and the Aztec princess Isabel Moctezuma.

Archaeological evidence has suggested that Quivira was located near the Great Bend of the Arkansas River in central Kansas. The remains of several Indian settlements have been found near Lyons along Cow Creek and the Little Arkansas River along with articles of Spanish manufacture dating from Coronado’s time.[8]

The Quivirans were almost certainly the Indians who came later to be called the Wichita. Coronado’s meager descriptions of Quivira resemble the Wichita villages of historic times. The Quivirans seem to have been numerous, based on the number of settlements Coronado visited, with a population of at least 10,000 persons. They were good farmers as well as buffalo hunters. Judging from Coronado’s description, they were a healthy, peaceful people.

The province of Harahey Coronado found on the borders of Quivira may have been located on the Smoky Hill River near the present city of Salina, Kansas. The people of Harahey were probably Pawnee, a tribe related by language and culture to the Wichita.

The first European definitively known to visit the Great Bend region after Coronado was the French explorer Étienne de Bourgmont. In 1724, Bourgmont journeyed with an escort of Kaw and other Indians westward from the Missouri River to a large village of Indians believed to be Apaches.[9] The village was near Lyons, precisely where Quivira had been almost 200 years earlier.[10]

The original Quivirans had moved to eastern Kansas and south to Oklahoma.[11] Their reasons for moving may have been to escape the depredations of the Apache, aggressive newcomers to the Great Plains. It also appears that the Wichita of the 18th century were fewer in number than the Quivirans of the 16th century. It is probable that smallpox and other diseases introduced by Europeans took their toll on the Quivirans as they did on many of the Indian tribes in the Americas.

The origin of the word "Quivira" is uncertain. The inhabitants of Coronado's Quivira called themselves "Tancoa" and "Tabas." These two names are similar to later Wichita sub-tribes called "Tawakonis" and "Taovayas."[12]

On early 16th and 17th century maps of North America, a large region including what is now Kansas, Oklahoma, southeastern Colorado, northeastern New Mexico and the Texas panhandle was called "Quivira."[13][14]

The last remnants of the formerly extensive cartographic region of Quivira today is the city of Lake Quivira and the Quivira National Wildlife Refuge in Kansas. In addition, there is the "Quivira Council" of the Boy Scouts, serving the area of southwestern Kansas around Wichita, the central part of the area that was traditionally called Quivira.[15] The first several yearbooks printed by the University of Kansas were entitled "Quivira." There is also a major arterial road running through the suburbs of Kansas City named "Quivira Road".

An abandoned Indian Pueblo in Torrance County, New Mexico has been given the name "La Gran Quivira" ("The Great Quivira"). The site was inhabited during the early period of Spanish occupation, when the settlement was called Pueblo de Las Humanas. The remains of the Gran Quivira settlement are today part of Salinas Pueblo Missions National Monument.

In the Western video game, Gun, the game's villain seeks a golden cross which he believes leads to Quivira. A prologue scene shows Coronado's search for Quivira. Another video game, Uncharted: Golden Abyss, is based around the search of Quivira. In the Lincoln Child and Douglas Preston book, Thunderhead, the location of Quivira is discovered to be a cliff dwelling, whereas the "gold" is found to be a highly valued gold colored, mica flecked pottery found only at the one city.