From Infogalactic: the planetary knowledge core
(Redirected from Quoin (architecture))
Jump to: navigation, search
This article is about the architectural technique. For other uses, see Quoin (disambiguation).
File:RomaPalazzetto.jpg
Quoining on the corners of Palazzo Aragona Gonzaga, Rome. 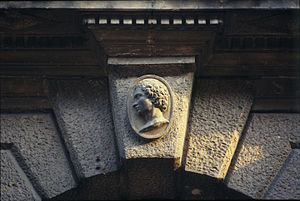 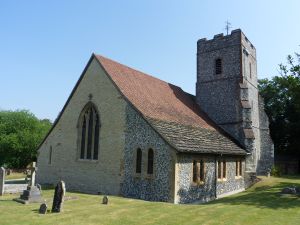 The near corner pictured of the Church of St. Mary, Fetcham demonstrates the alternate horizontal quoining technique.

Quoins (/kɔɪn/ or /kwɔɪn/) are masonry blocks at the corner of a wall.[1] They exist in some cases to provide actual strength for a wall made with inferior stone or rubble[2] and in other cases to make a feature of a corner,[3] creating an impression of permanence and strength, and reinforcing the onlooker’s sense of a structure’s presence.[4]

Stone quoins are used on stone or brick buildings. Brick quoins may appear on brick buildings that extrude from the facing brickwork in such a way as to give the appearance of uniformly cut blocks of stone larger than the bricks. Where quoins are used for decoration and not for load-bearing, they may be made from a wider variety of materials beyond brick, stone or concrete, extending to timber, cement render or other stucco.

In a traditional, often decorative use, large exactly cuboid ashlar stone blocks or replicas are only used on the corners with their longest sides horizontally: the longest sides are laid to be on one wall plane then the other that the corner forms (course after course). This forms a long-side, short-side alternate pattern, which by using the same size blocks alternates when the viewer passes the corner. This can be called the alternate, horizontal quoining technique.

The long and short quoining method instead places long stone blocks with their lengths oriented vertically, between smaller ones that are laid flat. This load bearing quoining is common in Anglo-Saxon buildings such as that of St Bene't's Church in Cambridge, England.