Cross was born in Red Scar, near Preston, Lancashire, the son of William Cross (1771–1827) and his wife Ellen, daughter of Edward Chaffers. He was educated at Trinity College, Cambridge and was called to the Bar, Inner Temple, in 1849.[1] 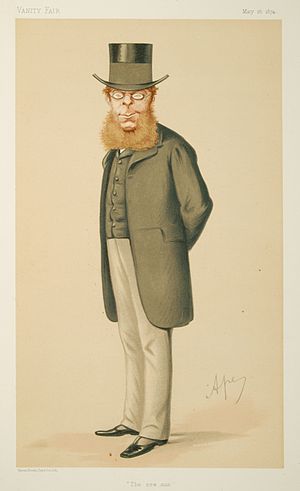 Cross entered Parliament as one of two representatives for Preston in 1857, a seat he held until 1862. He was out of Parliament for the next year, but in 1868 he was elected for South West Lancashire, and continued to represent this constituency until his elevation to the peerage in 1886. Cross first came to prominence as Home Secretary in Disraeli's second government (1874–1880), and retained this office in Lord Salisbury's first government (1885–1886). The latter year he was raised to the peerage as Viscount Cross, of Broughton-in-Furness in the County of Lancaster. He then moved over to the India Office (1886–1892). Lord Cross was very briefly Chancellor of the Duchy of Lancaster in Salisbury's third government (1895–1902) before being elevated to the sinecure post Lord Privy Seal. In 1898 he chaired the Joint Select Committee on Electrical Energy (Generating Stations and Supply), which recommended granting compulsory purchase powers for the building of power stations. He retired in 1900.

In 1884, Cross was elected to the Board of the Manchester, Sheffield and Lincolnshire Railway,[2] and he remained a Director of that company, and of its successor the Great Central Railway (GCR), until his death.[3] During Board meetings, he would occasionally murmur "Where is the money to come from?"[4] In June 1909, when he was senior Director of the GCR, that railway named one of its class 8D express passenger locomotives The Rt. Hon. Viscount Cross G.C.B., G.C.S.I. in his honour.[5][6]

Lord Cross married Georgiana, daughter of Thomas Lyon, in 1852. His eldest son, the Hon. William Cross, represented Liverpool West Derby in Parliament. Lady Cross died in January 1907. Lord Cross survived her by seven years and died in January 1914, aged 90. He was succeeded in the viscountcy by his grandson, Richard Assheton Cross, the only son of the Honourable William Cross.