From Infogalactic: the planetary knowledge core
Jump to: navigation, search
For the civil use of this facility, see Christchurch Airfield. 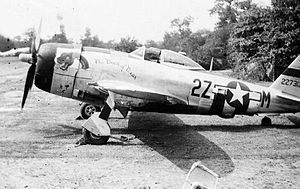 RAF Christchurch is a former Royal Air Force installation and was located southeast of the A337/B3059 junction in Somerford, Christchurch, Dorset, England.

Christchurch Airfield was a civil airfield started operation from 1926 and was known as Bournemouth Airport. Hurn Airfield, built for wartime operations, then assumed the name on release from wartime service, and has remain Bournemouth Airport ever since. Christchurch was used during World War II by the Royal Air Force and the United States Army Air Forces Ninth Air Force. After the war the airfield returned to civilian use. The airfield complex was demolished in 1966.

In 1943, the USAAF Ninth Air Force required several temporary advanced landing grounds along the southern English Channel coast prior to the Normandy invasion to provide tactical air support for the ground forces landing in France. Christchurch was provided to support this mission.

Christchurch was known as USAAF Station AAF-416 for security reasons by the USAAF during the war, and by which it was referred to instead of location. It's USAAF Station Code was "CH".

Christchurch airfield saw the arrival of the USAAF 405th Fighter Group on 4 April 1944, the group arriving from Walterboro Army Airfield South Carolina. The 405th had the following operational squadrons:

The 405th was a group of Ninth Air Force's 84th Fighter Wing, IX Tactical Air Command. It flew the Republic P-47 Thunderbolt. The 405th moved to its Advanced Landing Ground at Picauville, France (ALG A-8) on 22 June 1944, ending the USAAF's use of Christchurch.

The airfield complex was demolished in 1966 and there is housing and The Runway Industrial Park located on the site.