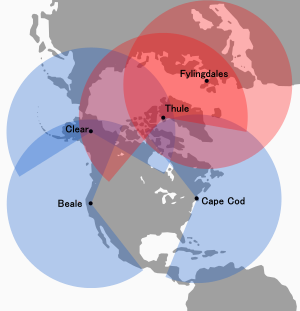 RAF Fylingdales is a Royal Air Force station on Snod Hill in the North York Moors, England. Its motto is "Vigilamus" (translates to "We are watching"). It is a radar base and is also part of the Ballistic Missile Early Warning System (BMEWS). As part of intelligence-sharing arrangements between the United States and United Kingdom (see, for example, the UKUSA Agreement), data collected at RAF Fylingdales are shared between the two countries. Its primary purpose is to give the British and US governments warning of an impending ballistic missile attack (part of the so-called four minute warning during the Cold War). A secondary role is the detection and tracking of orbiting objects.

While the radar station remains a British asset operated and commanded by the Royal Air Force, it also forms one of three stations in the United States BMEWS network (the United States also funds the cost of the radar units). The other two stations in the network are Thule Air Base, Greenland and Clear Air Force Station, Alaska. The data grab obtained by Fylingdales is shared fully and freely with the United States, where it feeds into the US-Canadian North American Aerospace Defense Command at Peterson Air Force Base in Colorado Springs. To this end a United States Air Force liaison officer is stationed at the base.

The primary radars of RAF Fylingdales are Active electronically scanned array (AESA) (phased array) radars, mounted on each face of a truncated tetrahedron, typically referred to as the "pyramid". This makes Fylingdales unique amongst its peers in that it covers a full 360 degrees. Each of the three arrays contains around 2 560 transmit/receive modules; total peak power output equates to some 2.5 MW, with a tracking range of 5 556+ km.[2]

The functions of RAF Fylingdales have been subject to criticism from opposition groups, such as the Campaign for Nuclear Disarmament (CND), leading to protests being held on occasion. These stem from concerns regarding the base's association with nuclear warfare and the militarisation of space. They argue against the UK assisting the US National Missile Defense (NMD) programme with RAF Fylingdales' ability to detect attacks, claiming it to be unnecessary.

The Ministry of Defence (MoD) defends the use and role of the facility however, regarding RAF Fylingdales as part of the UK's contribution to counter a military threat. The MoD states that although ballistic missile attack is a minor threat currently, this could change in the long-term future if as yet unknown enemies develop missiles as a means to overcome large distances to strike at the UK.

Another RAF Station, RAF Menwith Hill, is also located in Yorkshire and has a close arrangement with the United States. It too has been the focus of protests.

The monitoring function is referred to in the Jethro Tull song "Fylingdale Flyer" which appears on the album A and in the Slipstream video. 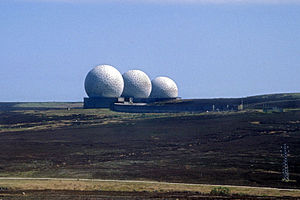 The radomes at Fylingdales in 1986 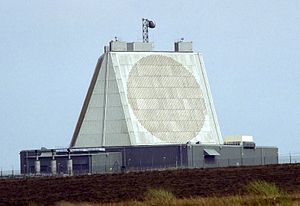 The station was built by the Radio Corporation of America (RCA) in 1962, and was maintained by RCA (Great Britain), now Serco Group plc. RAF Fylingdales consisted of three 40-metre-diameter 'golfballs' or geodesic domes (radomes) containing mechanically steered radar. It became a local tourist attraction as a result. Coach tours to the nearby coastal town of Whitby drove past the site, at which point drivers would typically switch the radio on and allow passengers to listen to the interference caused by the radars.

Between 1989 and 1992, Raytheon, the US defence contractor, completed a contract that saw the domes replaced by the current tetrahedron ('pyramid') structure, housing the Active Electronically Scanned Arrays or AESA (phased array) radar.

In June 2003, concern arose locally that RAF Fylingdales was emitting harmful emissions after a possible cancer cluster was discovered around a similar radar facility on Cape Cod in the United States. The issue was investigated by the local NHS organisation, the Scarborough, Whitby and Ryedale Primary Care Trust, and a report was released in December. It concluded that there was no link between RAF Fylingdales and local cancer rates nor any abnormal risk, as cancer rates in the immediate area proved to be normal.[3] A 2003 MoD report on the impact of the NMD upgrade at RAF Fylingdales reiterated that the base was within health guidelines and would remain so.

In the late 1990s the United States decided to pursue a National Missile Defense plan fully, and RAF Fylingdales attracted further publicity. To improve tracking capabilities (for launches from Africa and the Middle East) the United States wanted the use of Fylingdales as part of its NMD network. After receiving a formal request from the US, the British Government agreed to its use as an NMD tracking facility in 2003. This decision has led to renewed demonstrations by CND and other anti-nuclear and anti-war protestors. It has also complicated Britain's fragile relationship with certain European Union states such as France. The decision was criticised because the proposed NMD system was solely for US benefit.

A £449 million upgrade for RAF Fylingdales to become an NMD tracking facility is now underway by Boeing, with Raytheon as the major subcontractor. It will replace many internal systems - computers, displays, etc. - to improve resolution and tracking accuracy. No external changes are being made in direct relation to these upgrades and no power increases will occur.

According to the BBC, The Independent reported that the British Government secretly agreed to a US request to station NMD missile interceptors at Fylingdales Moor in late 2004. This has subsequently been denied by the Ministry of Defence.[4]