RRH Portreath is a Remote Radar Head operated by the Royal Air Force. It is situated at Nancekuke Common on the clifftops to the north of Portreath beach and southwest of Porthtowan in Cornwall. Its radar (housed in a fibre glass or golf ball protective dome) provides long-range coverage of the south western approaches to the UK. 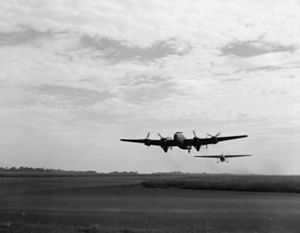 Handley Page Halifax of No. 295 Squadron RAF based at Holmesley South, getting airborne from Portreath, Cornwall, towing Airspeed Horsa glider to Tunisia, during Operation Beggar, 1943

Called RAF Portreath, the base was built during 1940, opened in March 1941 and had a varied career during the Second World War, initially as a RAF Fighter Command station, from October 1941 as a ferry stop-over for aircraft bound to/from North Africa and the Middle East, as a temporary stop-over for USAAF and RCAF units, and then as a Coastal Command station. By the end of the war, it had run down and in May 1950 was handed back to the government by the RAF.

The base reverted to its local name Nancekuke and became an outstation of Chemical Defence Establishment (CDE) Porton Down. Manufacture of the nerve agent Sarin in a pilot production facility commenced there in the early 1950s, producing about 20 tons of the nerve agent from 1954 until 1956. Nancekuke became an important factory for stockpiling the UK's Chemical Defences during the Cold War. Periodically, small amounts of VX were also produced at Nancekuke. Production of VX agent was intended mainly for laboratory test purposes, but also to validate plant designs and optimise chemical processes for potential mass-production. However, full-scale mass-production of VX agent never took place. In the late 1950s, the chemical weapons production plant at Nancekuke was mothballed, but was maintained through the 1960s and 1970s in a state whereby production of chemical weapons could easily re-commence if required.[1]

Many of the CDE buildings were demolished in 1979-1980. From 1978-1981, some buildings on the site were used by Pattern Recognition Munitions for small arms ammunition development. The company also constructed a 100-yard firing range for ammunition testing. The RAF re-opened parts of the site as a manned radar station in October 1980, a Control and Reporting Post (CRP) for UK Air Surveillance. In 1986 an underground CRP was built as part of the new UKADGE (United Kingdom Air Defence and Ground Environment) project. New mobile, Marconi Electronic Systems manufactured, radar systems, including an S723 Martello (RAF Type 91), and telecommunication installations were added during the mid-1980s. In the late nineties, the installation became remote operation, and the primary Radar was replaced with the British Aerospace (BAe) Type 101. The surrounding area is occasionally used for rallying. Portreath's parent station was RAF St. Mawgan for administration but data was routed to RAF Neatishead.

In 2000 it was reported that former workers at the Nancekuke base had died as a result of exposure to nerve gas, and the matter was raised in the Houses of Parliament.[2] It was alleged by the Independent that toxic materials had been dumped in nearby mineshafts.[3] Works to cleanse the site began in 2003.[4]