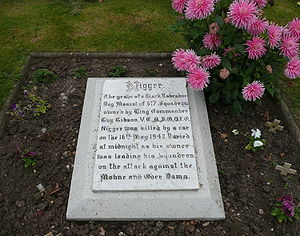 The grave of Guy Gibson's dog

Royal Air Force Scampton or RAF Scampton (IATA: SQZ, ICAO: EGXP) is a Royal Air Force station located adjacent to the A15 road, near to the village of Scampton, Lincolnshire and 6 miles (9.7 km) north west of county town Lincoln in England.

RAF Scampton stands on the site of a First World War Royal Flying Corps landing field, originally called Brattleby.[1] The station has remained in operation almost uninterrupted ever since and has provided an airfield for fighters in the First World War, bombers during the Second World War and V-force Avro Vulcans during the Cold War.

After a short period of closure in the 1990s Scampton reopened and is now home to the Royal Air Force Aerobatic Team, otherwise known as the Red Arrows. The station was due to close in 2014 but in June 2012 the Ministry of Defence confirmed the Red Arrows would remain there until at least the end of the decade.[2]

Home Defence Flight Station Brattleby (also known as Brattleby Cliff) was opened on the site of the current RAF Scampton in late 1916. The first operational unit was A Flight, 33 Sqn RFC, which flew FE2bs defending against the Zeppelin threat.[1] The site then developed into a training aerodrome, supporting No. 60 Training Sqn, followed by No. 81 and No. 11 Training Sqns, flying the Sopwith Camel, Pup and Dolphin. The station was renamed as Scampton in 1917. It was closed in April 1919. The area was then returned to its previous owners and by 1920 all the buildings, including the hangars, had been removed.[3][4]

As part of the expansion of the RAF in the 1930s, the site was extended by compulsory purchase. RAF Scampton reopened in October 1936 as a No. 3 Group RAF station with 9 Sqn flying Handley Page Heyfords and 214 Sqn flying Vickers Virginias. Soon afterwards, 214 Sqn moved to RAF Feltwell, and 148 Sqn was formed from C Flt of 9 Sqn.[3][5]

At the outbreak of the Second World War, Scampton transferred to No. 5 Group RAF in Bomber Command and 49 Sqn and 83 Sqn moved in, re-equipping with Handley Page Hampdens for the hazardous task of low level minelaying (code named 'Gardening',[6]) and the bombing of ships. By 1942, the squadrons had changed to the Avro Lancaster, but were then replaced at Scampton by 57 Sqn and 617 Sqn.[4][6]

617 was established for the Dambusters mission codenamed 'Operation Chastise' in which Wing Commander Guy Gibson led the attack on the dams in the Ruhr Valley, for which he was awarded the Victoria Cross. The grave of his dog, Nigger, run over and killed the day before Operation Chastise, can still be seen at Scampton.[7]

For many years a Lancaster bomber (S for Sugar) was gate guardian at Scampton, along with the large Tallboy and Grand Slam bombs they had carried,[9] but this first Lancaster was moved to the RAF museum at Hendon. Later, another restored Lancaster, repatriated from a French island in the South Pacific, took its place. This later Lancaster, Just Jane NX611, is now at the Lincolnshire Aviation Heritage Centre at the former RAF East Kirkby.

In the late 1950s, as a preliminary to road widening work by Lincolnshire County Council, the gate guardian – then a Grand Slam bomb – had to be moved. Efforts to lift it with a small crane proved futile, as it was much heavier than expected. Upon closer examination, it was found to be still filled with live explosives. It was carefully removed on an RAF low loader and detonated on a test range. It is unclear how a live bomb managed to be put on display, but it seems that it was in place for well over a decade.[10]

Scampton was the home of the Vulcan bomber during the Cold War period of the 1950s and 1960s, its Canberras having been moved out in 1955 when the station was earmarked as a V-bomber base. Vulcans were the launch platform for the UK's airborne nuclear deterrent, primarily through the carriage of Blue Steel missiles and WE.177 bombs. It was because of the Vulcans that an almost 2,000-year-old Roman road was diverted from its straight north/south track in order to extend the runway. The eastward bulge in the A15 road can still be seen north of Lincoln.[11]

The RAF Central Flying School (CFS) moved to Scampton, and the base was home to Red Arrows aerobatic team. In the mid 1990s, Scampton was mothballed under the Front Line First programme, with the CFS moving to nearby RAF Cranwell. The Red Arrows, though, continued to train in the restricted airspace surrounding the airfield. Scampton, however, continued to be used as overflow from RAF Waddington. During this intervening period the majority of the NCO married quarters were sold to the Welbeck Estate Group. More recently, the Red Arrows moved back to Scampton to free space at Cranwell, and they are the only permanent users of the airfield.

As part of a reorganisation, Air Combat Service Support units of 2 Group and personnel from RAF Boulmer and elsewhere were planning to move to Scampton, making its future more secure. However, financial problems meant that infrastructure improvements were not possible and these units moved to RAF Leeming in North Yorkshire instead.

RAF Scampton is now the home of Control and Reporting Centre Scampton, the Mobile Meteorological Unit in addition to RAFAT (Red Arrows). This provides a mix of fighter controllers, reservists and aircrew. It has administrative control over a satellite site, RAF Kirton-in-Lindsey, 15-miles to the north of the Scampton site.[citation needed] RAF Scampton is the home of No. 1 Air Control Centre, the main operational unit for fighter controllers and aerospace systems operators in the RAF.[12] Operators usually train at the Control and Reporting Centres of Boulmer and Scampton before putting their training into practice at 1ACC or on E3 Sentry Aircraft.[citation needed]

Plans are currently awaiting approval (October 2014) for the refurbishment of Gibson Barracks at RAF Scampton,[13] including replacement of windows, refurbishment and repair of external concrete areas and provision of new escape stairs.[13] The barracks had not been used for over 20 years,[13] and had fallen into quite a state of disrepair.[13] The building was converted into teaching space in the 1980s[13] but it is now intended to convert it back to the residential use.[13] Upon refurbishment it is intended to use the barracks to house service personnel returning from overseas.[13]

Although the building is not a listed structure, it is situated within a site of significant heritage value due to its links to Operation Chastise.[13]

There will be 48 bedrooms with communal facilities.[13]

It has been announced that a portion of Peter Jackson's remake of the 1954 film Dambusters will be filmed at RAF Scampton.[citation needed] Nigger, a Wing Commander Gibson's dog who was also a feature of the film, was buried in the grounds of the RAF station after he was run over and killed by a car on the nearby road.[14]

Based at RAF Scampton