RAF Tarrant Rushton was a Royal Air Force station near the village of Tarrant Rushton east of Blandford Forum in Dorset, England from 1943 to 1947. It was used for glider operations during World War II and later revived for civilian operations. It is currently disused, though some buildings survive.

Building of the airfield commenced in May 1942, the airfield being intended for the use of airborne forces of 38 Wing. On 17 May 1943 the base was handed over while still unfinished. Glider operations finally started in October 1943 and continued until 1945.

Horsa gliders from Tarrant Rushton left for France on the eve of D-Day, to begin Operation Tonga with an action that would later become known as Pegasus Bridge. Among the glider pilots was Jim Wallwork, on a Horsa nicknamed Lady Irene. The Tarrant Rushton gliders landed in occupied France shortly after midnight. Wallwork's aircraft was the first to touch down, but it landed heavily: the force of the impact catapulted both Wallwork and his co-pilot John Ainsworth through the front of the cockpit. Although stunned, this made them the first Allied troops to touch French soil on D-Day.[1] 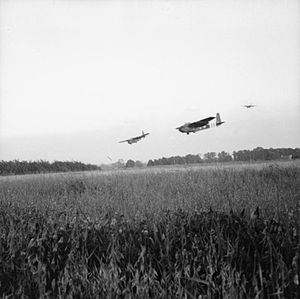 As part of Operation Tonga, a few Tetrarch tanks of 6th Airborne's Reconnaissance Regiment were also flown from Tarrant Rushton in Hamilcar gliders, towed by Halifax bombers, to land on the French coast near the mouth of the Orne river.[2]

Other gliders were later flown from the airfield to Arnhem to take part in Operation Market Garden. During the closing stages of WWII, aircraft were used for SOE operations.

In September 1946 the airfield was placed on Care and Maintenance status until abandoned in December 1947. However, 6 months later, in June 1948, Flight Refuelling Ltd arrived to begin 30 years of occupancy. Almost immediately Flight Refuelling became involved in the Berlin Airlift and, between July 1948 and August 1949, carried out nearly 4500 sorties using Lancastrians and Lancasters.

In the following 30 years most activity was centred on conversion of aircraft for in-flight refuelling and drone aircraft development, with FR Aviation refining their "Universal Drone Pack" on aircraft flown from the air field. The system allowed the test pilot to fly the aircraft from take-off to touch-down using only the push-buttons on a console identical to that of the ground operator of the drone, turning the button pushes into control surface and throttle movements. During this time, Tarrant Rushton was the home of 8 Sea Vixens, among them XP924, (now G-CVIX), the only Sea Vixen to remain in flying condition.[3][4]

In the 70s Flight Refuelling left the airfield and flying operations moved to Hurn. After that, it was only used by gliders and occasionally by light aircraft until it was officially closed on 30 September 1980.

A memorial to the men who served at the airfield is located by the roadside next to one of the surviving hangars.