From Infogalactic: the planetary knowledge core
Jump to: navigation, search
For other uses, see RSS (disambiguation).
For RSS feeds from Wikipedia, see Wikipedia:Syndication.

Subscribing to a website RSS removes the need for the user to manually check the website for new content. Instead, their browser constantly monitors the site and informs the user of any updates. The browser can also be commanded to automatically download the new data for the user.

Software termed "RSS reader", "aggregator", or "feed reader", which can be web-based, desktop-based, or mobile-device-based, presents RSS feed data to users. Users subscribe to feeds either by entering a feed's URI into the reader or by clicking on the browser's feed icon. The RSS reader checks the user's feeds regularly for new information and can automatically download it, if that function is enabled. The reader also provides a user interface.

The RSS formats were preceded by several attempts at web syndication that did not achieve widespread popularity. The basic idea of restructuring information about websites goes back to as early as 1995, when Ramanathan V. Guha and others in Apple Computer's Advanced Technology Group developed the Meta Content Framework.[4]

RDF Site Summary, the first version of RSS, was created by Dan Libby and Ramanathan V. Guha at Netscape. It was released in March 1999 for use on the My.Netscape.Com portal.[5] This version became known as RSS 0.9.[6] In July 1999, Dan Libby of Netscape produced a new version, RSS 0.91,[2] which simplified the format by removing RDF elements and incorporating elements from Dave Winer's news syndication format.[7] Libby also renamed the format from RDF to RSS Rich Site Summary and outlined further development of the format in a "futures document".[8]

This would be Netscape's last participation in RSS development for eight years. As RSS was being embraced by web publishers who wanted their feeds to be used on My.Netscape.Com and other early RSS portals, Netscape dropped RSS support from My.Netscape.Com in April 2001 during new owner AOL's restructuring of the company, also removing documentation and tools that supported the format.[9]

Two parties emerged to fill the void, with neither Netscape's help nor approval: The RSS-DEV Working Group and Dave Winer, whose UserLand Software had published some of the first publishing tools outside Netscape that could read and write RSS.

Winer published a modified version of the RSS 0.91 specification on the UserLand website, covering how it was being used in his company's products, and claimed copyright to the document.[10] A few months later, UserLand filed a U.S. trademark registration for RSS, but failed to respond to a USPTO trademark examiner's request and the request was rejected in December 2001.[11]

The RSS-DEV Working Group, a project whose members included Guha and representatives of O'Reilly Media and Moreover, produced RSS 1.0 in December 2000.[12] This new version, which reclaimed the name RDF Site Summary from RSS 0.9, reintroduced support for RDF and added XML namespaces support, adopting elements from standard metadata vocabularies such as Dublin Core.

In December 2000, Winer released RSS 0.92[13] a minor set of changes aside from the introduction of the enclosure element, which permitted audio files to be carried in RSS feeds and helped spark podcasting. He also released drafts of RSS 0.93 and RSS 0.94 that were subsequently withdrawn.[14]

In September 2002, Winer released a major new version of the format, RSS 2.0, that redubbed its initials Really Simple Syndication. RSS 2.0 removed the type attribute added in the RSS 0.94 draft and added support for namespaces. To preserve backward compatibility with RSS 0.92, namespace support applies only to other content included within an RSS 2.0 feed, not the RSS 2.0 elements themselves.[15] (Although other standards such as Atom attempt to correct this limitation, RSS feeds are not aggregated with other content often enough to shift the popularity from RSS to other formats having full namespace support.)

Because neither Winer nor the RSS-DEV Working Group had Netscape's involvement, they could not make an official claim on the RSS name or format. This has fueled ongoing controversy[specify] in the syndication development community as to which entity was the proper publisher of RSS.

One product of that contentious debate was the creation of an alternative syndication format, Atom, that began in June 2003.[16] The Atom syndication format, whose creation was in part motivated by a desire to get a clean start free of the issues surrounding RSS, has been adopted as IETF Proposed Standard RFC 4287.

In July 2003, Winer and UserLand Software assigned the copyright of the RSS 2.0 specification to Harvard's Berkman Center for Internet & Society, where he had just begun a term as a visiting fellow.[17] At the same time, Winer launched the RSS Advisory Board with Brent Simmons and Jon Udell, a group whose purpose was to maintain and publish the specification and answer questions about the format.[18]

) for use in the Mozilla Firefox browser.[19]

In December 2005, the Microsoft Internet Explorer team[20] and Microsoft Outlook team[21] announced on their blogs that they were adopting Firefox's RSS icon. In February 2006, Opera Software followed suit.[22] This effectively made the orange square with white radio waves the industry standard for RSS and Atom feeds, replacing the large variety of icons and text that had been used previously to identify syndication data.

In January 2006, Rogers Cadenhead relaunched the RSS Advisory Board without Dave Winer's participation, with a stated desire to continue the development of the RSS format and resolve ambiguities. In June 2007, the board revised their version of the specification to confirm that namespaces may extend core elements with namespace attributes, as Microsoft has done in Internet Explorer 7. According to their view, a difference of interpretation left publishers unsure of whether this was permitted or forbidden.

RSS is XML formatted plain text. The RSS format itself is relatively easy to read both by automated processes and by humans alike. An example feed could have contents such as the following: 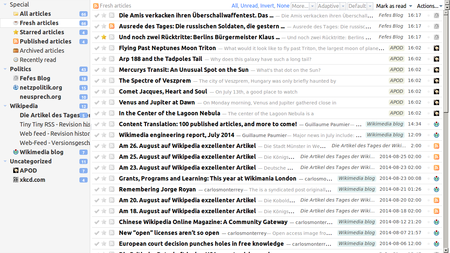 User interface of a feed reader

When retrieved, reading software could use the XML structure to present a neat display to the end users.

There are several different versions of RSS, falling into two major branches (RDF and 2.*).

The RDF (or RSS 1.*) branch includes the following versions:

Later versions in each branch are backward-compatible with earlier versions (aside from non-conformant RDF syntax in 0.90), and both versions include properly documented extension mechanisms using XML Namespaces, either directly (in the 2.* branch) or through RDF (in the 1.* branch). Most syndication software supports both branches. "The Myth of RSS Compatibility", an article written in 2004 by RSS critic and Atom advocate Mark Pilgrim, discusses RSS version compatibility issues in more detail.

The extension mechanisms make it possible for each branch to copy innovations in the other. For example, the RSS 2.* branch was the first to support enclosures, making it the current leading choice for podcasting, and as of 2005[update] is the format supported for that use by iTunes and other podcasting software; however, an enclosure extension is now available for the RSS 1.* branch, mod_enclosure. Likewise, the RSS 2.* core specification does not support providing full-text in addition to a synopsis, but the RSS 1.* markup can be (and often is) used as an extension. There are also several common outside extension packages available, e.g. one from Microsoft for use in Internet Explorer 7.

The most serious compatibility problem is with HTML markup. Userland's RSS reader—generally considered as the reference implementation—did not originally filter out HTML markup from feeds. As a result, publishers began placing HTML markup into the titles and descriptions of items in their RSS feeds. This behavior has become expected of readers, to the point of becoming a de facto standard,[citation needed] though there is still some inconsistency in how software handles this markup, particularly in titles. The RSS 2.0 specification was later updated to include examples of entity-encoded HTML; however, all prior plain text usages remain valid.

The primary objective of all RSS modules is to extend the basic XML schema established for more robust syndication of content. This inherently allows for more diverse, yet standardized, transactions without modifying the core RSS specification.

To accomplish this extension, a tightly controlled vocabulary (in the RSS world, "module"; in the XML world, "schema") is declared through an XML namespace to give names to concepts and relationships between those concepts.

Some RSS 2.0 modules with established namespaces are:

Although the number of items in an RSS channel is theoretically unlimited, some news aggregators do not support RSS files larger than 150KB. For example, applications that rely on the Common Feed List of Windows might handle such files as if they were corrupt, and not open them. Interoperability can be maximized by keeping the file size under this limit.

Some BitTorrent clients support RSS. RSS feeds which provide links to .torrent files allow users to subscribe and automatically download content as soon as it is published.

The following table shows RSS elements alongside Atom elements where they are equivalent.

Note: the asterisk character (*) indicates that an element must be provided (Atom elements "author" and "link" are only required under certain conditions).

Several major sites such as Facebook and Twitter previously offered RSS feeds but have reduced or removed support. Additionally, widely used readers such as Shiira, FeedDemon, and Google Reader have been discontinued having cited declining popularity in RSS.[29] However, RSS still remains a widely used standard. RSS support was removed in OS X Mountain Lion's versions of Mail and Safari, although the features were partially restored in Safari 8.[30][31] As of August 2015, Mozilla Firefox and Internet Explorer include RSS support by default, while Google Chrome and Microsoft Edge do not. Additionally, reader services such as Feedly provide synchronization between desktop RSS readers and mobile devices.