From Infogalactic: the planetary knowledge core
Jump to: navigation, search
This article is about the Maltese town. For the capital city of Morocco, see Rabat. For the Maltese town also called Rabat, on the island of Gozo, see Victoria, Gozo. 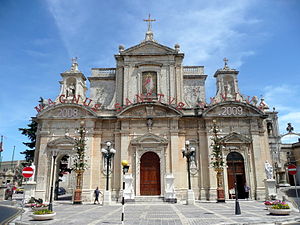 Rabat (Maltese: Ir-Rabat, [ɪrˈrɐbɐt]) is a town in the Northern Region of Malta, with a population of 11,497 as of March 2014.[2] The name of the town is derived from the Arabic word for 'suburb': الرباط, as it was the suburb of the old capital Mdina. Half of the present-day village core also formed part of the Roman city of Melita, before the latter was resized during the Fatimid occupation. The Apostolic Nunciature of the Holy See to the Republic of Malta is seated in this village. The Local Council of Rabat is also the administrator of Baħrija. Parts of the films Munich and Black Eagle were shot in Rabat. In December 1999, Mtarfa seceded from Rabat to form a separate Local Council by Act XXI, an amendment to the Local Council Act of 1993 (Act XV).

Rabat is home to the famous Catacombs of St. Paul and of St. Agatha. These catacombs were used in Roman times to bury the dead as, according to Roman culture, it was unhygienic to bury the dead in the city Mdina and parts of Rabat were built on top of an ancient Roman city. The Maltese Catacombs were never meant to be hiding places during persecutions or as living quarters.

The Catacombs of St. Paul are now looked after by Heritage Malta. Part of St. Paul's Catacombs, the part accessible from the Parish church which is dedicated to the same Saint, was where, according to tradition and as recorded in the Bible, St. Paul stayed for three months when he was shipwrecked on the island in 60 A.D.

In the Catacombs of St Agatha's, there are over 500 graves of several types, the majority being for children. There are sections for Pagans and Jews, as well as for Christians. There are also unique Frescos.

Another interesting feature in the Maltese Catacombs is the Agape Table.