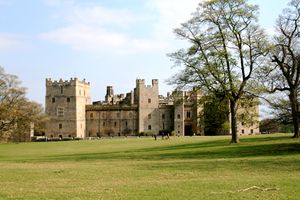 Raby Castle (grid reference NZ12912177) is near Staindrop in County Durham, England, in 200 acres (810,000 m2) of deer park.[1] It was built by John Neville, 3rd Baron Neville de Raby, between approximately 1367 and 1390. Cecily Neville, the mother of the Kings Edward IV and Richard III, was born here. After Charles Neville, 6th Earl of Westmorland, led the failed Rising of the North in favour of Mary, Queen of Scots in 1569 Raby Castle was taken into royal custody.

Sir Henry Vane the Elder purchased Raby Castle in 1626 and neighbouring Barnard Castle from the Crown, and the Earls of Darlington and Dukes of Cleveland added a Gothic-style entrance hall and octagonal drawing room.[2] From 1833 to 1891 they were the Dukes of Cleveland and they retain the title of Lord Barnard. Extensive alterations were carried out in the 17th and 18th centuries. It is the home and seat of John Vane, 11th Baron Barnard.[3] It is famed for both its size and its art, including works by old masters and portraits.[4] It is a Grade I listed building and open to the public on a seasonal basis. 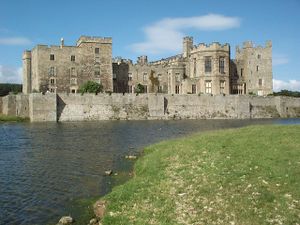 The south face of Raby Castle

The house of Neville held the manor of Raby from the 13th century,[5] and although the family had no formal title from 1295 they were summoned to Parliament as Barons of Raby;[6]

Ralph Neville, 1st Baron Neville de Raby, was the first to be summoned to Parliament. His heir, John Neville (1299/1300–1335), became a member of Thomas, 2nd Earl of Lancaster's household, beginning the family's link with the Earls of Lancaster.[7] Raby was the family's caput, their seat of power, and there may have been a fortified house on the site of the present building from around 1300.[5] In the second half of the 14th century the Nevilles began rebuilding several of their properties in northern England, including Raby Castle between roughly 1367 and 1390.[8] In the closing years of the century the Nevilles were becoming one of the most powerful families in northern England, comparable to the House of Percy, who had been made Earls of Northumberland in 1377.[6]

In 1378 Thomas Hatfield Bishop of Durham granted John de Neville a licence to fortify his property at Raby.[9] John died in 1388 and was succeeded by his son, Ralph.[6] Almost nothing of the family's papers survive from this period so there is little documentary evidence of Raby Castle's construction. The dating is based mostly on architectural details. In the words of historian Anthony Emery, the work "converted it from a defendable house into a palace-fortress".[5]

Ralph was created Earl of Westmorland on 29 September 1397 by Richard II as a reward for his loyalty in the face of political unrest.[6] However his family's traditional association with the Earls of Lancaster meant that when Henry Bolinbroke of the House of Lancaster invaded in July 1399 Neville sided with Bolingbroke. Neville helped persuade Richard II to abdicate and Henry was crowned as Henry IV. Neville was made Earl Marshal of England on the day of Henry's coronation and a Knight of the Order of the Garter in 1403.[6]

Henry Neville, 5th Earl of Westmorland, died in 1564 and was succeeded by his son, Charles. The Nevilles were Catholics and Charles was one of the leaders of the failed Rising of the North in 1569 against England's Protestant Queen Elizabeth I. Owing to the severity of the threat to the Crown, more than 800 rebels were executed and Charles Neville and Thomas Percy (Earl of Westmorland and another leader of the rebellion) fled into exile. In 1571 an attainder was issued against Neville and his lands were forfeited to the Crown.[10] 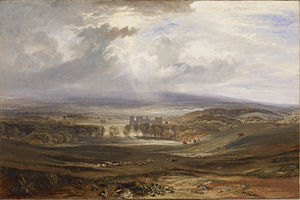 A painting by J.M.W. Turner of Raby Castle and its landscape in the early 19th century.[11] The Walters Art Museum.

After the Rising of the North the castle became the property of the Crown for more than forty-three years before being bought by Henry Vane the Elder.[12] He was impressed by the size and lands, contrasting with Barnard Castle, which was hemmed in by the surrounding town. The House of Vane was responsible for much of the modernising of the castle, especially the interior. This included renovation of the medieval chapel and drawing room.

The family drove a carriageway though the castle, causing much damage to its medieval fabric.[4] Architect William Burn carried out alterations to Raby Castle between 1843 and 1848, including adding new roofs to the great hall and the chapel and adding a drawing room to one of the towers in Jacobean style.[13] The present family is responsible for the great collection of art in the castle.[3]

On 17 March 1849, William the then Prince of Orange, succeeded to the throne of the Netherlands. He was at that moment a guest of the Duchess of Cleveland in Raby Castle.[14]

In 1890 the former 4th Duke of Cleveland died, leaving the line of succession to the castle and its vast estates unclear.[3] The case was decided in 1891 when the Committee of Privileges of the House of Lords deemed his relative, Henry de Vere Vane, to be the 9th Baron Barnard and inheritor of the vast estates of Raby. He did not, however, inherit the title of Duke of Cleveland, which became extinct.[15] 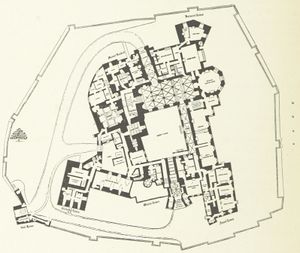 A plan of the castle from J. D. Mackenzie's The Castles of England: their story and structure[19]

Raby Castle has an irregular plan, with nine towers along its perimeter. The main entrance was in the west through the four-storey Neville Gateway.[13] Access to the gatehouse was via a drawbridge, since replaced by a flagged causeway.[4] The gatehouse originally contained three portcullises, as is shown by the still-visible grooves used to work them.[12] Two smaller towers beside the gatehouse have no defensive function and were added during the renovations of Henry Vane, 2nd Earl of Darlington.[4]

Access to the gatehouse is via a door through the curtain wall,[2] which rose to a height of thirty feet from the waters of the moat. It is strengthened periodically by buttress towers[13] and formed the second line of defence, the moat being the first.[20] The passage along the parapet was the ancient chemin de ronde (allure) on which guards were posted.[2] Similar passages can be found at York Castle and around the city of Oxford. The castle buildings surround a central courtyard. Forming its east side is the great hall, also known as the Baron's Hall. The interiors of the medieval kitchen and keep are mostly intact.[13][21]

The Castle is famous for its works of art, mostly collected by the Vane Family, including old masters and family portraits. Noted artists whose work is in the castle's collection include Giordano, Van Dyck and Sir Joshua Reynolds. The Small Drawing Room has a fine collection of sporting paintings, reflecting the interests of the family, including works by Ben Marshall, Henry Bernard Chalon and Sir Alfred Munnings, among others.[22]

There are some fine paintings in the library, including two architectural capriccios, one by Marco and Sebastiano Ricci and the other by Antonio Joli. A number of portraits include two paintings by Sir Peter Lely of Lady Mary Sackville and Louise de Kerouaille, a portrait of William Bankes by Pompeo Batoni and others of the family, including Sir Henry Vane the Elder and Sir Henry Vane the Younger, the latter at one time Governor of Massachusetts.[22]

The pictures in the ante-library are chiefly of the Dutch and Flemish schools of painting and include works by Pieter de Hooch and David Teniers the Younger. The dining room contains some of the Castle's most impressive paintings, including works by Sir Joshua Reynolds and Sir Anthony van Dyck. The paintings in this room are mostly portraits of members of the family or associates.[22]