From Infogalactic: the planetary knowledge core
Jump to: navigation, search
This article is about the biblical character. For other uses, see Rachel (disambiguation).

Rachel (Hebrew: רָחֵל, Modern Rakhél, Tiberian Rāḥēl) (Arabic: راحيل‎‎) was the favorite of Biblical patriarch Jacob's two wives as well as the mother of Joseph and Benjamin, two of the twelve progenitors of the tribes of Israel. The name "Rachel" is from an unused root meaning: "to journey as a ewe that is a good traveller."[2][3] Rachel was the daughter of Laban and the younger sister of Leah, Jacob's first wife. Rachel was a niece of Rebekah (Jacob's mother), Laban being Rebekah's brother,[4] making Jacob her first cousin. 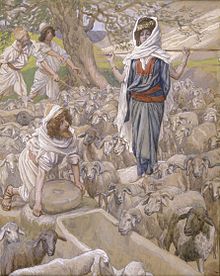 Rachel and Jacob by James Tissot.

Rachel is first mentioned in the Hebrew Bible in Genesis 29 when Jacob happens upon her as she is about to water her father's flock. She was the second daughter of Laban, Rebekah’s brother.[4] Jacob had traveled a great distance to find Laban. Rebekah had sent him there to be safe from his furious twin brother, Esau.

During Jacob's stay, he fell in love with Rachel and agreed to work seven years for Laban in return for her hand in marriage. On the night of the wedding, the bride was veiled and Jacob did not notice that Leah, Rachel's older sister, had been substituted for Rachel. Whereas "Rachel was lovely in form and beautiful," "Leah had tender eyes".[5] Later Jacob confronted Laban, who excused his own deception by insisting that the older sister should marry first. He assured Jacob that after his wedding week was finished, he could take Rachel as a wife as well, and work another seven years as payment for her. When God “saw that Leah was unloved, he opened her womb”, (Gen 29:31) and she gave birth to four sons.

Rachel, like Sarah and Rebecca, remained unable to conceive. According to Tikva Frymer-Kensky, "The infertility of the matriarchs has two effects: it heightens the drama of the birth of the eventual son, marking Isaac, Jacob, and Joseph as special; and it emphasizes that pregnancy is an act of God."[6]

Rachel became jealous of Leah and gave Jacob her maidservant, Bilhah, to be a surrogate mother for her. Bilhah gave birth to two sons that Rachel named and raised (Dan and Naphtali). Leah responds by offering her handmaid Zilpah to Jacob, and names and raises the two sons (Gad and Asher) that Zilpah bears. According to some commentaries, Bilhah and Zilpah are actually half-sisters of Leah and Rachel.[7] After Leah conceived again, Rachel was finally blessed with a son, Joseph,[4] who would become Jacob's favorite child.

Rachel's son, Joseph, was destined to be the leader of Israel's tribes between exile and nationhood. This role is exemplified in the Biblical story of Joseph, who prepared the way in Egypt for his family's exile there,[8] and in the future figure of Mashiach ben Yosef (Messiah, son of Joseph), who, in the Rabbinic Jewish view, will fight the apocalyptic Wars of Gog and Magog, preparing the way for the kingship of Mashiach ben David (Messiah, son of David) and the messianic age.[9][10] 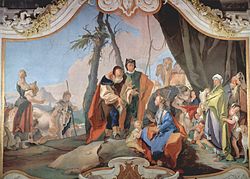 Fresco by Giovanni Battista Tiepolo of Rachel sitting on the idols.

After Joseph's birth, Jacob decided to return to the land of Canaan with his family.[4] Fearing that Laban would deter him, he fled with his two wives, Leah and Rachel, and twelve children without informing his father-in-law. Laban pursued him and accused him of stealing his idols. Indeed, Rachel had taken her father's idols, hidden them inside her camel's seat cushion, and sat upon them. Laban had neglected to give his daughters their inheritance (Gen 31:14–16). Rachel becomes a trickster like her father, her aunt (Rebekah), and her husband.[6]

Not knowing that the idols were in his wife's possession, Jacob pronounced a curse on whoever had them: "With whoever you will find your gods, he will not live" (Genesis 31:32). Laban proceeded to search the tents of Jacob and his wives, but when he came to Rachel's tent, she told her father, "Let not my lord be angered that I cannot rise up before you, for the way of women is upon me" (Genesis 31:35). Laban left her alone, but the curse Jacob had pronounced came true shortly thereafter. 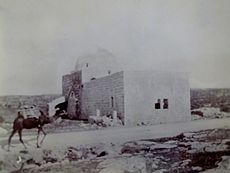 Near Ephrath, Rachel went into a difficult labor with her second son, Benjamin. The midwife told her in the middle of the birth that her child was a boy.[11] Before she died, Rachel named her son Ben Oni ("son of my mourning"), but Jacob called him Ben Yamin (Benjamin). Rashi explains that Ben Yamin either means "son of the right" (i.e., "south"), since Benjamin was the only one of Jacob's sons born in Canaan, which is to the south of Paddan Aram; or it could mean "son of my days," as Benjamin was born in Jacob's old age.

Rachel was buried by Jacob on the road to Efrat, just outside Bethlehem,[12] and not in the ancestral tomb at Machpelah. Today a site claimed to be Rachel's Tomb, located between Bethlehem and the Israeli settlement of Gilo, is visited by tens of thousands of visitors each year.[13]

Additional references in the Bible 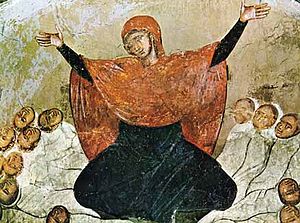 Rachel is weeping for her children, 14th century fresco from Marko's Monastery.

Rachel, the wife of Jacob (Yaqub), the mother of Joseph (Yusuf) and Benjamin (Binyamin), is an honored woman in Islam. Yaqub and Yusuf are frequently mentioned by name in the Qur'an whilst Rachel is only referenced and not mentioned by name.