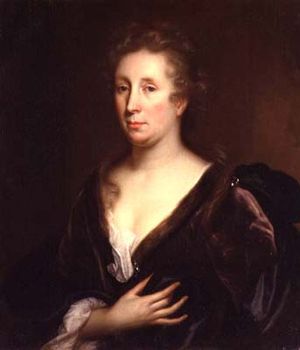 Rachel Ruysch (3 June 1664 – 12 August 1750) was a still life painter from the Northern Netherlands who specialized in flowers. She invented her own style and achieved international fame in her lifetime, being followed by Jan van Huysum who took flower painting to another degree of popularity. Due to her long and successful career that spanned over 6 decades, she became the best documented woman painter of the Dutch Golden Age.[1] 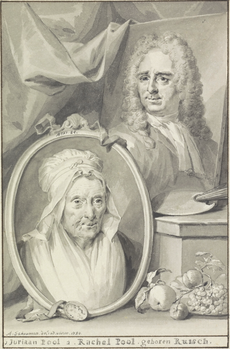 Juriaan Pool and his wife Rachel Pool, born Ruisch, at the age of 84. By then he was dead.

Rachel Ruysch was born on 3 June 1664 in The Hague to the scientist Frederik Ruysch and Maria Post, the daughter of the architect Pieter Post. Her father was a professor of anatomy and botany,[1] and an amateur painter.[2] He had a vast collection of animal skeletons, and mineral and botany samples which Rachel used to practice her drawing skills.[3] At a young age she began to paint the flowers and insects of her father's collection in the popular manner of Otto Marseus van Schrieck. She knew him and his disciples from his work for the Hortus Botanicus Amsterdam, where her father did business.[4]

Rachel would also have known and consorted with the flower painters Jan and Maria Moninckx, Alida Withoos and Johanna Helena Herolt-Graff, who all were about her age and who worked for the hortus owner Agnes Block and who, like her father, also worked with the plant collectors Jan and Caspar Commelin. In 1679, at age fifteen, Ruysch was apprenticed to Willem van Aelst, a prominent flower painter in Amsterdam. His studio in Amsterdam looked out over the studio of the flower painter Maria van Oosterwijck. Ruysch studied with van Aelst until his death in 1683.[2] Besides painting technique he taught her how to arrange a bouquet in a vase so it would look spontaneous and less formalized. This technique produced a more realistic and three-dimensional affect in her paintings. By the time Ruysch was eighteen she was producing and selling independently signed works.[5]

In 1693 she married the Amsterdam portrait painter Juriaen Pool, with whom she had ten children. Throughout her marriage and adult life she continued to paint and produce commissions for an international circle of patrons.[5]

It is unknown whether Ruysch was a member of the Amsterdam Guild of Saint Luke, but early signed works by her in the 1680s show the influence of Otto Marseus van Schrieck. By 1699 Rachel and her family had moved to The Hague, where she was offered membership in the Confrerie Pictura in The Hague as their first female member.[6] In 1701 she and her husband both became members of The Hague Painter's Guild. Several years later, in 1708, Ruysch was invited to work for the court in Düsseldorf and serve as court painter to Johann Wilhelm, Elector Palatine.[6] She obtained a contract for works painted at home that she periodically brought to Düsseldorf.[6] She remained working for him and his wife from 1708 until the prince's death in 1716.

Art historians consider Ruysch to be one of the most talented still life artists among both men and women.[7] By her death at age 86 she had produced hundreds of paintings, of which more than 250 have been documented or are currently attributed to her.[5] Her dated works establish that she painted from the age of 15 until a few years before her death.

Ruysch had a strong understanding of drawing and the techniques of earlier traditions. This knowledge improved her painting abilities.[2] Stylistically, her artwork, with its playful composition and brilliant colors, was part of the rococo movement.[8] She paid extensive attention to all details in her work. Every petal was created painstakingly with delicate brushwork.[9] The background of Ruysch's paintings are usually dark which was the fashion for flower painting in the second half of the 17th century. Her asymmetrical compositions with drooping flowers and wild stems created paintings that seemed to possess a great energy about them.[5]

Ruysch had painted a number of forest floor pictures which feature small animals, reptiles, butterflies, and fungi in her early work. She later adopted flower painting as her main concern and continued to paint until her death, thus continuing the 17th-century style right down to the middle of the following century.[10]

Ruysch's skill lay in the minute observation of each flower in a totally realistic way which is then composed into an elaborate arrangement which would be very difficult to achieve in nature, as the flowers would not support each other so well under such an arrangement. In common with most flower pieces from the last third of the 17th century, the colors of the flowers are much more carefully balanced than in the earlier pictures.[10]

The symbolism of each flower was elaborately developed in the 17th century, but most of this concerned the introduction of a single flower into a Vanitas piece. Apart from Jan van Huysum, no 18th century flower painter matched the skill of Rachel Ruysch.[10]

Ruysch enjoyed great fame and reputation in her lifetime. When she died in 1750, eleven poets paid her their respects with poems about her.[1] In the 17th century the Dutch were very interested in flowers and gardening, so paintings that highlighted the beauty of nature were highly valued. This helped to build and maintain Ruysch's clientele throughout her career.[5] In her lifetime her paintings were sold for very high prices of up to 750-1200 guilders. In comparison, Rembrandt rarely received more than 500 guilders for a painting in his lifetime.[11]