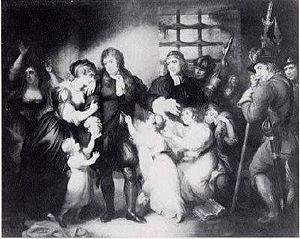 Rachel, Lady Russell (née Lady Rachel Wriothesley /ˈraɪəθsli/ rye-ƏTHS-lee;[1] c. 1636 – 29 September 1723)[2] was an English noblewoman, heiress, and author. Her second husband was William, Lord Russell, who was implicated in the Rye House Plot and later executed. A collection of the many letters she wrote to her husband and other distinguished men was published in 1773.

Lady Rachel was born in about 1636 at Titchfield, Hampshire, the second eldest daughter and co-heiress of Thomas Wriothesley, 4th Earl of Southampton, by his first wife, Rachel de Massue, daughter of Daniel de Massue, Seigneur de Rouvigny and Madeleine de Pinot des Fontaines. Lady Rachel received a religious upbringing, and remained throughout her life, a devout member of the Church of England.[3]

In her youth, she was described as having been remarkable for her elegance of form, personal beauty, and graceful manners.[4]

In 1653, Lady Rachel married her first husband, Francis Vaughan, Lord Vaughan, the eldest son of Richard Vaughan, 2nd Earl of Carbery. Upon their marriage, she went to live with her father-in-law at Golden Grove in Carmarthen, Wales. In 1655, she gave birth to a child, whose sex and name was not recorded as it died shortly after its birth. She became a widow in 1667, which was the same year her father died. She and her older sister, Elizabeth, Viscountess Campden, inherited his entire estate. Lady Campden received the family seat of Titchfield, while the share which Lady Vaughan inherited was the domain of Stratton, also in Hampshire. Rachel remained with the Viscountess Campden at Titchfield for some time after their father's death.

In 1669, Lady Vaughan married her second husband, William, Lord Russell, who was three years her junior. They obtained a marriage licence at Titchfield on 31 July 1669, and were married on 20 August 1669. The marriage was described as having been happy, and Lord Russell appreciated his wife's intelligence, virtue, affection and piety.[5] In 1678, upon the death of her childless brother-in-law, Francis, the couple became known as Lord and Lady Russell. Together they had four children:

In 1683, Lord Russell was one of the conspirators in the Rye House Plot, a plan to ambush King Charles II and his brother, James, Duke of York, to prevent a Catholic succession. The two were on their way back to London from the Newmarket races, but their schedule was altered. The plot was disclosed to the government, and Lord Russell, unlike his co-conspirators, refused to escape to Holland. He was accused of promising his assistance in an insurrection and bringing about the death of the King and the Duke of York. On 26 June 1683, he was sent to the Tower of London and shortly afterwards, tried and convicted of treason, although all the evidence presented against him was all hearsay. Lady Russell had acted as his secretary during his trial where he was sentenced to death by beheading. Upon his condemnation, Lady Russell laboured diligently to save her husband's life; she was aided by her father-in-law, the Earl of Bedford, who offered a sum of between £50,000 to £100,000 for a pardon to his son. Lady Russell even threw herself at the King's feet, pleading for him to grant clemency to her husband; however, the King was unmoved by her tearful pleas, and refused to abrogate the death sentence.[6]

On the day before her husband's execution, Lady Russell visited him in the Tower and they embraced one last time. The following morning, on 21 July 1683, he was beheaded at Lincoln's Inn Fields. Several days later, she wrote the King a letter.[7]

The attainder against her husband was reversed by a bill which was passed in Parliament and received the royal signature in the reign of William III and Mary II.[8]

Throughout her long life, Lady Russell was an avid letter-writer as well as an author.[9] Her numerous letters, which were later published in 1773, were written mainly to her husband but also to many distinguished men such as John Tillotson, Archbishop of Canterbury. They were of good quality and exceptionally well written, and her correspondence provides a personal insight into 17th-century English domestic life. In addition to her letters, Rachel also wrote diaries, essays, a catechism, and Instructions for Children. The full title of the 1826 edition of the "Letters" is Letters of Lady Rachel Russell: from the manuscript in the library at Woburn Abbey ... and the trial of lord William Russell for high treason. The edition of 1853 (2 vols.) was edited by Earl Russell, annotated by John Martin, the librarian to the Duke of Bedford, and published by Longman, Brown, Green and Longmans, London.

Seven engraved portraits of Rachel Wriothesley are displayed in the National Portrait Gallery in London.

Lady Russell died at Southampton House, Bloomsbury, London on 29 September 1723, the anniversary of her husband's birth; she was about 87 years old. Lady Russell was buried beside her husband on 8 October 1723 in the Bedford Chapel at the Parish Church of Chenies, Buckinghamshire.