Radio comedy, or comedic radio programming, is a radio broadcast that may involve sitcom elements, sketches and various types of comedy found on other media. It may also include more surreal or fantastic elements, as these can be conveyed on a small budget with just a few sound effects or some simple dialogue. 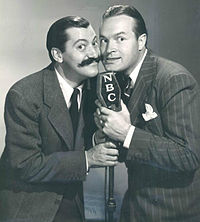 Radio comedy in the United States began when Raymond Knight launched The Cuckoo Hour on NBC in 1929, along with the 1931 network debut of Stoopnagle and Budd on CBS. Comedians such as Fred Allen, Jack Benny, Judy Canova, Bob Hope and Red Skelton were top-rated in the decades that followed. Even after the big name comedians moved to television, radio comedy continued, notably from Bob and Ray, The Firesign Theatre and segments heard on NBC's Monitor.

Although traditional comedy was once a significant part of American broadcast radio programming, it is now mainly found in the archives of Old Time Radio enthusiasts and on the Internet streaming of comedy recordings. The majority of mainstream radio comedy now consists of personality-driven shows hosted by talk-radio hosts such as Howard Stern or comedic duos such as Armstrong & Getty and Bob & Tom. Exceptions to this are WSRN's "Audience of Two", Garrison Keillor's work on Minnesota Public Radio: A Prairie Home Companion and Comedy College, and NPR's Car Talk, a comedy show thinly disguised as car advice, and Wait Wait... Don't Tell Me!. Shows featuring comedic music are also popular; one of the better known national comedy music programs is the long-running weekly program hosted by Dr. Demento, and several other local stations (mostly college radio, freeform and eclectic formats) have similar programs. Several networks program 24 hours a day of stand-up comedy routines; several channels on the Sirius XM Radio platforms focus on this format, as does the terrestrial All Comedy Radio network. Rock music stations often play bits of stand-up comedy within the bounds of their regular formats, usually under the banner of a "five o'clock funnies" feature.

In Britain and Canada, however, the BBC and CBC respectively have continued making new radio comedy and drama. British radio comedy also has a home on Australia's Radio National and in Ireland there are always a few comedy shows in the week's programming on RTÉ.

Many of the BBC's most successful television comedies began life as radio shows. These include Hancock's Half Hour, Goodness Gracious Me, Knowing Me, Knowing You, The League of Gentlemen, Whose Line Is It Anyway?, Room 101, Have I Got News For You, (based on Radio 4's The News Quiz), Dead Ringers and most recently Little Britain and Absolute Power. The science fiction comedy Red Dwarf was developed from ideas in a radio show called Son Of Cliché. Another science fiction comedy The Hitchhiker's Guide to the Galaxy was created for radio, but also went on to great success in book, television and film formats. This has unfairly led to some people viewing radio as just a stepping stone to television, ignoring the many advantages of the medium.

Examples of American radio comedy can be heard on streaming internet radio stations. Humorous storytelling is the focus of The Moth Radio Hour. Garrison Keillor's A Prairie Home Companion can be heard on public radio stations in the United States and a different version of the shows can be heard on BBC Radio 4 Extra and RTÉ under the name Garrison Keillor's Radio Show. Old shows can be listened to online at the websites of "A Prairie Home Companion" or RTÉ. British radio comedy can be heard on BBC Radio 4, BBC Radio 2 and BBC Radio 4 Extra. Minnesota Public Radio maintains a website where it is possible to listen to episodes of Comedy College. A British commercial station Oneword broadcast American vintage radio comedy as part of their 24-hour-a-day programming of books, comedy and drama and this was streamed on the internet until the station closed in 2008.

Interest in radio comedy and radio drama is currently enjoying a resurgence. Epguides.com, which provides encyclopedic information on television shows, has recently begun to build a similar list of radio shows.[1]

In America, new groups have formed to try to bring about a renewed interest in the art-form. At the forefront of this new wave of audio-only comedic groups is Peeper Radio Theatre. Veteran NPR Producer Joe Bevilacqua is creating new radio comedy for The Comedy-O-Rama Hour, which airs on XM Satellite Radio's Sonic Theater Channel 163, five times per week. In the UK, recent standup and revue comedy performances are also now receiving airing on radio.[2]