From Infogalactic: the planetary knowledge core
(Redirected from Radiocarbon)
Jump to: navigation, search
This article is about the radioactive isotope. For the scientific journal, see Radiocarbon (magazine).

Carbon-14, 14C, or radiocarbon, is a radioactive isotope of carbon with a nucleus containing 6 protons and 8 neutrons. Its presence in organic materials is the basis of the radiocarbon dating method pioneered by Willard Libby and colleagues (1949) to date archaeological, geological and hydrogeological samples. Carbon-14 was discovered on 27 February 1940, by Martin Kamen and Sam Ruben at the University of California Radiation Laboratory in Berkeley. Its existence had been suggested by Franz Kurie in 1934.[2]

There are three naturally occurring isotopes of carbon on Earth: 99% of the carbon is carbon-12, 1% is carbon-13, and carbon-14 occurs in trace amounts, i.e., making up about 1 or 1.5 atoms per 1012 atoms of the carbon in the atmosphere. The half-life of carbon-14 is 5,730±40 years.[3] Carbon-14 decays into nitrogen-14 through beta decay.[4] A gram of carbon containing 1 atom of carbon-14 per 1012 atoms will emit 0.192[citation needed] beta rays per second. The primary natural source of carbon-14 on Earth is cosmic ray action on nitrogen in the atmosphere, and it is therefore a cosmogenic nuclide. However, open-air nuclear testing between 1955–1980 contributed to this pool.

The different isotopes of carbon do not differ appreciably in their chemical properties. This is used in chemical and biological research, in a technique called carbon labeling: carbon-14 atoms can be used to replace nonradioactive carbon, in order to trace chemical and biochemical reactions involving carbon atoms from any given organic compound.

The emitted beta particles have a maximum energy of 156 keV, while their average[clarification needed] energy is 49 keV. These are relatively low energies; the maximum distance traveled is estimated to be 22 cm in air and 0.27 mm in body tissue. The fraction of the radiation transmitted through the dead skin layer is estimated to be 0.11. Small amounts of carbon-14 are not easily detected by typical Geiger–Müller (G-M) detectors; it is estimated that G-M detectors will not normally detect contamination of less than about 100 000 disintegrations per minute (0.05 µCi). Liquid scintillation counting is the preferred method.[5] The G-M counting efficiency is estimated to be 3%. The half-distance layer in water is 0.05 mm.[6]

Radiocarbon dating is a radiometric dating method that uses (14C) to determine the age of carbonaceous materials up to about 60,000 years old. The technique was developed by Willard Libby and his colleagues in 1949[7] during his tenure as a professor at the University of Chicago. Libby estimated that the radioactivity of exchangeable carbon-14 would be about 14 disintegrations per minute (dpm) per gram of pure carbon, and this is still used as the activity of the modern radiocarbon standard.[8][9] In 1960, Libby was awarded the Nobel Prize in chemistry for this work.

One of the frequent uses of the technique is to date organic remains from archaeological sites. Plants fix atmospheric carbon during photosynthesis, so the level of 14C in plants and animals when they die approximately equals the level of 14C in the atmosphere at that time. However, it decreases thereafter from radioactive decay, allowing the date of death or fixation to be estimated. The initial 14C level for the calculation can either be estimated, or else directly compared with known year-by-year data from tree-ring data (dendrochronology) up to 10,000 years ago (using overlapping data from live and dead trees in a given area), or else from cave deposits (speleothems), back to about 45,000 years before the present. A calculation or (more accurately) a direct comparison of carbon-14 levels in a sample, with tree ring or cave-deposit carbon-14 levels of a known age, then gives the wood or animal sample age-since-formation.

Natural production in the atmosphere 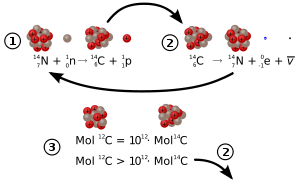 Carbon-14 is produced in the upper layers of the troposphere and the stratosphere by thermal neutrons absorbed by nitrogen atoms. When cosmic rays enter the atmosphere, they undergo various transformations, including the production of neutrons. The resulting neutrons (1n) participate in the following reaction:

The rate of 14C production can be modelled[10] and is between 16 400 to 18 800 atoms 14C per m2, which agrees with the global carbon budget that can be used to backtrack,[11] but attempts to directly measure the production rate in situ were not very successful. Production rates vary because of changes to the cosmic ray flux caused by the heliospheric modulation (solar wind and solar magnetic field), and due to variations in the Earth's magnetic field. The latter can create significant variations in 14C production rates, although the changes of the carbon cycle can make these effects difficult to tease out.[11][12] Occasional spikes may occur; for example, there is evidence for an unusually strong increase of the production rate in AD 774–775.,[13] caused by an extreme solar energetic particle event, strongest for the last ten millennia.[14][15]

Carbon-14 can also be produced by other neutron reactions, including in particular 13C(n,gamma)14C and 17O(n,alpha)14C with thermal neutrons, and 15N(n,d)14C and 16O(n,3He)14C with fast neutrons.[16] The most notable routes for 14C production by thermal neutron irradiation of targets (e.g., in a nuclear reactor) are summarized in the table. 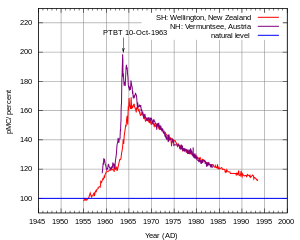 The above-ground nuclear tests that occurred in several countries between 1955 and 1980 (see nuclear test list) dramatically increased the amount of carbon-14 in the atmosphere and subsequently in the biosphere; after the tests ended, the atmospheric concentration of the isotope began to decrease.

One side-effect of the change in atmospheric carbon-14 is that this has enabled some options (e.g. bomb-pulse dating[21]) for determining the birth year of an individual, in particular, the amount of carbon-14 in tooth enamel,[22][23] or the carbon-14 concentration in the lens of the eye.[24]

Dispersion in the environment

After production in the upper atmosphere, the carbon-14 atoms react rapidly to form mostly (about 93%) 14CO (carbon monoxide), which subsequently oxidizes at a slower rate to form 14CO2, radioactive carbon dioxide. The gas mixes rapidly and becomes evenly distributed throughout the atmosphere (the mixing timescale in the order of weeks). Carbon dioxide also dissolves in water and thus permeates the oceans, but at a slower rate.[12] The atmospheric half-life for removal of 14CO2 has been estimated to be roughly 12 to 16 years in the northern hemisphere. The transfer between the ocean shallow layer and the large reservoir of bicarbonates in the ocean depths occurs at a limited rate.[17] In 2009 the activity of 14C was 238 Bq per kg carbon of fresh terrestrial biomatter, close to the values before atmospheric nuclear testing (226 Bq/kg C; 1950).[25]

Many man-made chemicals are derived from fossil fuels (such as petroleum or coal) in which 14C is greatly depleted. 14CO2--or rather, its relative absence—is therefore used to determine the relative contribution (or mixing ratio) of fossil fuel oxidation to the total carbon dioxide in a given region of the Earth's atmosphere.[28]

Dating a specific sample of fossilized carbonaceous material is more complicated. Such deposits often contain trace amounts of carbon-14. These amounts can vary significantly between samples, ranging up to 1% of the ratio found in living organisms, a concentration comparable to an apparent age of 40,000.[29] This may indicate possible contamination by small amounts of bacteria, underground sources of radiation causing the 14N(n,p) 14C reaction, direct uranium decay (although reported measured ratios of 14C/U in uranium-bearing ores[30] would imply roughly 1 uranium atom for every two carbon atoms in order to cause the 14C/12C ratio, measured to be on the order of 10−15), or other unknown secondary sources of carbon-14 production. The presence of carbon-14 in the isotopic signature of a sample of carbonaceous material possibly indicates its contamination by biogenic sources or the decay of radioactive material in surrounding geologic strata. In connection with building the Borexino solar neutrino observatory, petroleum feedstock (for synthesizing the primary scintillant) was obtained with low 14C content. In the Borexino Counting Test Facility, a 14C/12C ratio of 1.94×10−18 was determined;[31] probable reactions responsible for varied levels of 14C in different petroleum reservoirs, and the lower 14C levels in methane, have been discussed by Bonvicini et al.[32]

In the human body

Since many sources of human food are ultimately derived from terrestrial plants, the carbon that comprises our bodies contains carbon-14 at the same concentration as the atmosphere. The rates of disintegration of potassium-40 and carbon-14 in the normal adult body are comparable (a few thousand disintegrated nuclei per second).[33] The beta-decays from external (environmental) radiocarbon contribute approximately 0.01 mSv/year (1 mrem/year) to each person's dose of ionizing radiation.[34] This is small compared to the doses from potassium-40 (0.39 mSv/year) and radon (variable).

Carbon-14 can be used as a radioactive tracer in medicine. In the initial variant of the urea breath test, a diagnostic test for Helicobacter pylori, urea labeled with approximately 37 kBq (1.0 µCi) carbon-14 is fed to a patient (i.e. 37,000 decays per second). In the event of a H. pylori infection, the bacterial urease enzyme breaks down the urea into ammonia and radioactively-labeled carbon dioxide, which can be detected by low-level counting of the patient's breath.[35] The 14-C urea breath test has been largely replaced by the 13-C urea breath test, which has no radiation issues.