Radnor Township is a township with home rule status in Delaware County, Pennsylvania, United States. As of the 2010 census, the township population was 31,531. Radnor Township lies along the Main Line, a collection of affluent Philadelphia suburbs.

Villanova University, Cabrini College, the Valley Forge Military Academy and College and Eastern University are all located within Radnor Township.

Radnor Township was founded 1682 as a land grant from William Penn. The township was part of the Welsh Tract and was named for Radnorshire in Wales. In 1717, the Welsh Friends erected a Quaker meetinghouse (Radnor Friends Meetinghouse) near what is now the intersection of Conestoga Road and Sproul Road at the geographic center of the township. The new town, "Radnorville", later known as the community of "Ithan" after nearby Ithan Creek, grew around the meetinghouse. The Welsh influence waned in the late 18th century as many left the area due to high taxation. Stone monuments were erected in various locations throughout the township in the late 20th century to commemorate the township's Welsh heritage. 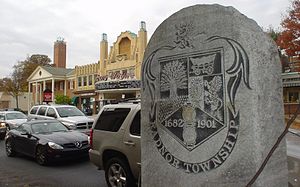 Memorial mile post on U.S. 30 in front of the Anthony Wayne Theater and the AT&T tower in the background.

Other historic structures in Radnor Township include the Sorrel Horse, a former tavern located on Conestoga Road that sheltered George Washington and Lafayette during the Continental Army's retreat back to Philadelphia from the Battle of Brandywine.[1]

Lancaster Pike, the first toll road in the United States, connected the cities of Philadelphia and Lancaster, Pennsylvania, passing through Radnor Township, opened in 1794. That road is now part of the Lincoln Highway (U.S. Route 30 in Pennsylvania). The Columbia Railroad, later part of the Pennsylvania Railroad also passed through in 1832. Thus, Radnor is one of the towns associated with the local moniker "Main Line." A separate railroad passing through Radnor Township, the Philadelphia and Western Railroad, was opened in the early 20th century. The "Main Line" railroad facilities and a portion of the P&W facilities are still used by SEPTA (the Philadelphia area's transit authority), and the "Main Line" railroad tracks are also used by AMTRAK.

In the 1880s, George W. Childs bought property in the community of Louella in the western part of Radnor Township, renamed the area Wayne, Pennsylvania (after American Revolutionary War hero Anthony Wayne) and organized one of the United States's first suburban developments.

The Radnor Friends Meetinghouse and Woodcrest are listed on the National Register of Historic Places.[2]

A map, c. 1895, showing most of Radnor Township together with other communities on the Pennsylvania Main Line.

Places of worship include St. David's Episcopal Church, whose graveyard, and buildings begun in 1715, are listed on the National Register of Historic Places.[6][7]

Lincoln Financial Group is headquartered in Radnor Township.[8] In 2007 the company moved 400 employees, including its top executives, to Radnor from Philadelphia.[9] Other companies based in Radnor Township include, J. G. Wentworth, TV Guide magazine and Airgas.

According to Radnor Township's 2013 Comprehensive Annual Financial Report,[10] the top employers in the city are:

Archbishop John Carroll High School, a Roman Catholic High School in the Archdiocese of Philadelphia.Valley Forge Military Academy and College contains a boarding school program for seventh through twelfth grades. The Agnes Irwin School is an all-girls school for prekindergarten through twelfth grade. St. Katharine of Siena is a Catholic school in Wayne for students in kindergarten through eighth grade. The Hill Top Preparatory School is a school located in Ithan for students with learning disabilities in sixth through twelfth grade, and is now accommodating fifth graders, as of September 2011.