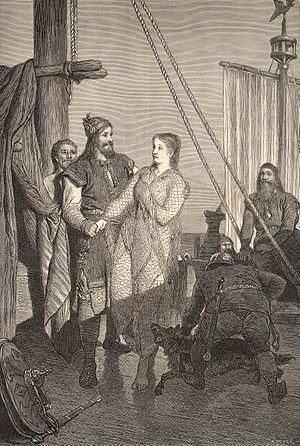 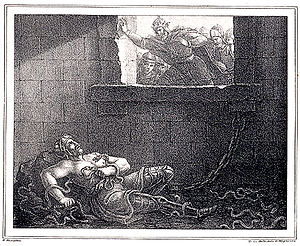 Ragnar Lodbrok or Lothbrok (Old Norse: Ragnarr Loðbrók, "Ragnar Shaggy-Breeches") was a legendary[2][3] viking leader and hero of Old Norse poetry and sagas from the Viking age. According to this traditional literature, Ragnar distinguished himself by many raids against Francia and Anglo-Saxon England, during the 9th century.

According to traditional sources, Ragnar was:

According to the antiquarian Hilda Ellis Davidson, writing in 1980, "certain scholars in recent years have come to accept at least part of Ragnar's story as based on historical fact". [5] On the other hand, historian Katherine Holman, wrote in 2003 that "although his sons are historical figures, there is no evidence that Ragnar himself ever lived, and he seems to be an amalgam of several different historical figures and pure literary invention."[4]

The most significant medieval sources that mention Ragnar include:

As a figure of legend whose life only partially took place in times and places covered by written sources, the extent of Ragnar's historicity is not quite clear.

In her commentary on Saxo's Gesta Danorum, Davidson notes that Saxo's coverage of Ragnar's legend in book IX of the Gesta appears to be an attempt to consolidate many of the confusing and contradictory events and stories known to the chronicler into the reign of one king, Ragnar. That is why many acts ascribed to Ragnar in the Gesta can be associated, through other sources, with various figures, some of which are more historically certain. These candidates for the "historical Ragnar" include:

So far, attempts to firmly link the legendary Ragnar with one or several of those men have failed because of the difficulty in reconciling the various accounts and their chronology. Nonetheless, the core tradition of a Viking hero named Ragnar (or similar) who wreaked havoc in mid-ninth-century Europe and who fathered many famous sons is remarkably persistent, and some aspects of it are covered by relatively reliable sources, such as the Anglo-Saxon Chronicle.