From Infogalactic: the planetary knowledge core
Jump to: navigation, search
For the Dalmatian city now in Croatia, see Dubrovnik.

listen (help·info) (Sicilian: Rausa; Latin: Ragusia) is a city and comune in southern Italy. It is the capital of the province of Ragusa, on the island of Sicily, with around 75,000 inhabitants. It is built on a wide limestone hill between two deep valleys, Cava San Leonardo and Cava Santa Domenica. Together with seven other cities in the Val di Noto, it is listed among the UNESCO World Heritage Sites.

The origins of Ragusa can be traced back to the 2nd millennium BC, when in its area there were several settlements of the ancient Sicels. The current Ragusa Ibla lies probably on one of them, identified as Hybla Heraea.

The ancient city, located on a hill, 300 metres (980 ft) high, entered in contact with the nearby Greek colonies, and developed thanks to the nearby port of Camerina. After a short Carthaginian rule, it was administered by the Romans and the Byzantines: the latter fortified the city and built a large castle. Ragusa was occupied by the Arabs in 848 AD, remaining under their rule until the 11th century, when the Normans conquered it. Selected as County seat, its first Count was Geoffrey, son of Count Roger I of Sicily.

Ragusa thereafter followed the events of the Kingdom of Sicily, created in the first half of the twelfth century. A Chiaramonte family fief, it remained the county capital after the unification with that of Modica in 1296, a status it lost in the 15th century after a popular revolt.

In 1693 the city was devastated by a huge earthquake, which killed some 5,000 inhabitants. Following this catastrophe the city was largely rebuilt, many baroque buildings date from this period. Most of the population moved to a new settlement in the former district of Patro, calling the new municipality "Ragusa Superiore" (Upper Ragusa) and the ancient city "Ragusa Inferiore" (Lower Ragusa). The two cities remained separated until 1926, when they were fused together to become the provincial capital in 1927 at the expense of Modica, the former capital and the most populous and important city in the region since 1296.

In 1838 an asphalt deposit was discovered, which is still being worked.

The city has two distinct areas, the lower and older town of Ragusa Ibla, and the higher Ragusa Superiore (Upper Town). The two halves are separated by the Valle dei Ponti, a deep ravine crossed by four bridges. The most noteworthy of them is the eighteenth-century Ponte dei Cappuccini.

The Cathedral of San Giovanni Battista is the main monument of Ragusa Superiore. The church was located originally in the west part of the ancient Ragusa, under the walls of the Mediaeval castle, where the small church of St. Agnese is today. A first, smaller edifice was quickly built after the 1693 earthquake, but it soon proved inadequate. The current edifice was built between 1718 and 1778, with a façade in typical southern Sicilian Baroque style, with three portals and carvings and sculptures representing the Madonna, St. John the Baptist and St. John the Evangelist. The upper order of columns has two watches showing time in Italian and French fashions respectively. The high bell tower, on the left side, is also in Baroque style (of another one, on the right side, only the cornerstone was laid off in 1820).

The ornate Baroque interior has a Latin cross plan, with a nave and two aisles separated by three colonnades embellished with gold. Over every column are charts showing Bible verses referring to St. John the Baptist. The vaults of the naves and the presbytery were decorated with Rococo gilted stuccoes by Giuseppe and Gioacchino Gianforma, also authors of the two statues in the niches of the transept. The dome was built in 1783, and covered with copper sheets in the 20th century. The side chapels, characterized by altars decorated with polychrome marbles, are from the 19th century.

Noteworthy is the Hyblean Archaeological Museum, with six sections devoted to Prehistoric to Late Roman findings.

The Cathedral of San Giorgio was built starting in 1738 by architect Rosario Gagliardi, in substitution of the temple destroyed by the 1693 earthquake, and of which only a Catalan-Gothyic style portal can still be seen. The façade is characterized by a flight of 250 steps and by massive ornate columns, as well as by statues of saints and decorated portals. The interior has a Latin cross plan, with a nave and two aisles ending in half-circular apses. It is topped by a large Neoclassical dome built in 1820.

On a narrow winding street that connects Ragusa Ibla (the new name of R. Inferiore, taken by a legendary Greek town maybe risen here) with Ragusa Superiore is the church of Santa Maria delle Scale ("Saint Mary of the Steps", built between the fifteenth and the sixteenth centuries). This church is particularly interesting: badly damaged in the earthquake of 1693, half of this church was rebuilt in Baroque style, while the surviving half was kept in the original Gothic (including the three Catalan-style portals in the right aisle). The last chapel of the latter has a Renaissance portal. The chapels have canvases from some Sicilian painters of the 18th century.

The Church of the Souls of the Purgatory has a Baroque portal. The church of Santa Maria dell'Itria, built by the Knights of Malta in the seventeenth century, has a campanile with ceramics from Caltagirone and a canvas attributed to Mattia Preti.

The church of San Giorgio, designed by Rosario Gagliardi and built in 1739–1775, has a façade with tiers of juxtaposed columns. The Treasury contains silver items of value. Similar though smaller is the nearby church of St. Joseph, with an elliptic interior housing a seventeenth-century statue of the dedicatee.

The church of Sant'Antonino is an example of Norman architecture, characterized by a Gothic portal, while the Church of Immacolata boasts a fine fourteenth-century portal.

San Giorgio Vecchio has a re-entrant façade with a notable Gothic-Catalan portal, with a high relief on the lunetta portraying St. George Killing the Dragon, and Aragonese eagles.

The Hyblean Garden offers a panorama on the three churches of the Cappuccini Vecchi, St. James (fourteenth century) and San Domenico.

The Zacco Palace is a Baroque building, its Corinthian columns support balconies of wrought iron work, caryatids and grotesques. 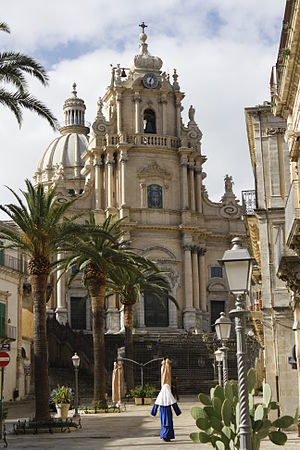 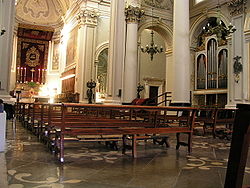 The 18th century interior of the Cathedral of St. John the Baptist.
700px
Ragusa Ibla