From Infogalactic: the planetary knowledge core
Jump to: navigation, search
For the raid on St Malo later in the year, see Battle of Saint Cast.

The Raid on St Malo took place in June 1758 when an amphibious British naval expedition landed close to the French port of St Malo in Brittany. While the town itself was not attacked, as had been initially planned, the British destroyed large amounts of shipping before re-embarking a week later. The naval forces were under the command of Richard Howe while the army was led by the Duke of Marlborough and Lord Sackville.

As part of an effort to provide a diversion in support of Britain's German Allies, William Pitt had conceived the idea of a series of Naval Descents. In 1757 a large expedition was sent to Rochefort where it captured an offshore island, but failed to make an attack on the town itself before returning home. Pitt believed that the failure was due to insufficient vigour by the expedition's commanders, and planned to launch further expeditions against the French coast in the coming year.

By early 1758 the British cabinet planned the next raid and began to assemble a force on the Isle of Wight. Pitt had learned a number of lessons from the Rochefort expedition. New landing craft were designed, and the process of assembling the force improved to speed up the departure date. The selected destination of the expedition was St Malo, a fishing and privateer port on the Brittany coast - which would allow the force to remain in the English Channel so it could return home at short notice in case of a French invasion of Britain.[3]

On 1 June the expedition sailed from England, reaching Cancale Bay near St Malo on 5 June. That evening the landing craft carrying the soldiers were put ashore.[4] St Malo was situated at the end of a causeway, and it was hoped that the British could cut off the fresh water supply that ran along it. Once ashore the only immediate opposition they faced was a French artillery battery, which was subdued by the guns of the British warships. The troops then marched towards St Malo, but it soon became apparent they would need to conduct a full-scale siege to take the town - something they did not have the time to do. Instead the British occupied St Servan, a nearby port, and burned 30 privateers and 100 other vessels.[5]

Troops were also sent on a reconnaissance eastwards towards Dol. They reported the approach of a sizeable French force - and Marlborough decided that it was the right time to withdraw. On 11 and 12 June the British expedition re-embarked.[6]

The force remained off St Malo for more than a week, and then sailed along the coast in an attempt to scout out fresh targets. The possibility of an attack on Le Havre or Caen was considered but not followed through. The British then began to focus their attention on Cherbourg in Normandy. However, bad weather forced them to abort planned landings on 29 June and 3 July and with his force short of water and other provision Marlborough made the decision to return home, and the expedition sailed for Portsmouth. 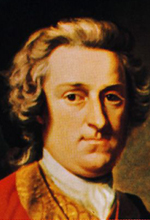 The raid's commander - the 3rd Duke of Marlborough. A few months later he was to lead the first British contingent to take part in the war in Germany.

While the expedition had failed to seize St Malo, it was widely considered a success.[7] The French became alarmed when the expedition had set off, believing it was destined for Flanders where it could link-up with the German army under the Duke of Brunswick which had recently crossed the River Rhine. When it was discovered that St Malo was the correct destination, the general French reaction was relief. However, as with the Rochefort raid, the sudden descent made the French more concerned about the coast and increasingly large numbers of troops were deployed on coastal defence duties.

In September of the same year, following a successful descent on Cherbourg a second British force under Thomas Bligh attempted another raid on St Malo. Caught ashore by a larger force of French troops they were only able to re-embark with considerable difficulty following the Battle of St Cast.[8] This brought an end to the policy of descents as government policy had changed to support a more direct British military presence in Germany.

It was announced that the Prince Edward, Duke of York, younger brother of the Prince of Wales, was to join the next expedition.[9]