The Raid on Taipei (Chinese: 臺北大空襲; pinyin: Táiběi Dà Kōngxí) that took place on 31 May 1945 was the largest Allied air raid on the city of Taipei (known as Taihoku at the time) during World War II. Despite efforts by Allied planners to minimize civilian casualties, many residents were killed in the raid and tens of thousands wounded or displaced. 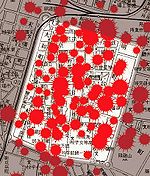 As early as 1943, Fourteenth Air Force of the United States Army Air Forces and units of the combined air force of U.S. and Nationalist China had launched several air raids against military and industrial targets in Japanese Taiwan. Before this, Soviet volunteer units and Chinese air force had attacked military bases around Taipei Area, most of which were targeted on smaller objectives and were of smaller scales. After American ground forces captured Subic Bay in the Philippines, the Allied air forces began larger and more systematic air raids against targets on the island of Taiwan. After October 12, 1944, Allied air forces began scheduled air raids on factories located in Pingtung and Huwei, Takao Harbor, and fighter production facility in the outskirt of Takao. Also, Taipei, the capital and political and financial center of Taiwan, had been under constant aerial assaults by the Allies since that time. 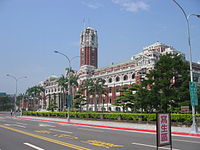 On May 31, 1945, units of the Fifth Air Force consisting of 117 Consolidated B-24 Liberator heavy bombers were sent to conduct the largest air raid ever on Taiwan. The bombing began from around ten o'clock in the morning and lasted until one o'clock in the afternoon, during which the attack was non-stop. The Americans met virtually no resistance from the Japanese, mainly due to the attrition the Japanese air forces had suffered in the Aerial Battle of Taiwan-Okinawa, which completely exhausted Japan's fighter units in Taiwan. The Allies dropped approximately 3,800 bombs on military units and governmental facilities in Taipei[citation needed]; many other buildings within the downtown area and Japanese quarter also suffered various damages. 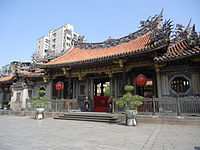 Longshan Temple was extensively damaged by the raid and ensuing fire

The Office of the Governor-General of Taiwan suffered a direct hit, in spite of the building being heavily camouflaged to avoid being targeted. The building suffered extensive damage from fire caused by the bombs and almost collapsed on itself; it was rendered unoccupiable and was not repaired until the Nationalist Chinese takeover. Other facilities hit during the bombing included the residence of the Assistant Governor-General, Taiwan Railway Hotel, Office of Governor-General Library, Army Headquarters, Taihoku (Taipei) Imperial University, Taipei Main Station, Bank of Taiwan, Taipei High Court, Taipei Park, and many other facilities.

Although the Allies tried to avoid civilian casualties, many civilian installations were mistakenly bombed, including Taipei First Girls' High School, Huashan Catholic Church of Taipei, and the famous Longshan Temple, which was hit in the main building and the left corridor; many precious artifacts and art works in the temple were lost in the ensuing fire.

The number of deaths totaled more than 3,000, which exceeded the total number of deaths resulting from all the previous air raids on Taiwan by the Allies. Tens of thousands of people were displaced or became homeless, and many buildings were destroyed either by the attacks or by the fire caused by the attacks. The air raid showed that the city was defenseless against Allied aerial assaults, and the Governor-General ordered schools and other installations to be evacuated, and that more air raid drills be held.

After the conclusion of World War II, because of its pro-American political stance, the government of Republic of China toned down the attack and excluded it from the media and history textbooks.

On 15 July 2009, two duds assumed to be dropped during this raid was found in a construction site of MRT Xinyi Line near Chiang Kai-shek Memorial Hall. Bomb-disposal units of the ROC Armed Forces safely removed them at last.