Railtrack was a group of companies that owned the track, signalling, tunnels, bridges, level crossings and all but a handful of the stations of the British railway system from 1994 until 2002. It was created as part of the privatisation of British Rail, listed on the London Stock Exchange, and was a constituent of the FTSE 100 Index. In 2002, after experiencing major financial difficulty, most of Railtrack's operations were transferred to the state-controlled non-profit company Network Rail. The remainder of Railtrack was renamed RT Group plc and eventually dissolved on 22 June 2010. 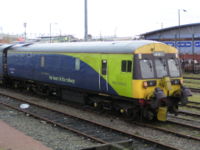 Founded under Conservative legislation that privatised the railways, Railtrack took control of the railway infrastructure on 1 April 1994 and was floated on the Stock Exchange in May 1996.[1] Robert Horton was first chairman, leading the organisation through the early years of its existence up to 1999, including an industrial dispute from June to September 1994.[2]

The fatal accidents at Southall in 1997[3] and Ladbroke Grove in 1999[4] called into question the effect that the fragmentation of the railway network had had on both safety and maintenance procedures.

In February 1999 the company launched a bond issue which caused a significant fall in Railtrack's share price.[5]

Railtrack was severely criticised for both its performance in improving the railway infrastructure and for its safety record. Between its creation and late 1998, the company had a relatively calm relationship with its first economic regulator, John Swift QC, whose strategy was to encourage Railtrack to make commitments to improvement.[6] But critics said that the regulator was not tough enough and that the company had, as a result, been able to abuse its monopoly position. In particular, its customers, the passenger and freight train operators, were desperate for regulatory action to force the company to improve its stewardship of the network and its performance. Swift had been appointed rail regulator in 1993 by the then Conservative transport secretary John MacGregor MP. When the Labour government took over after the general election in May 1997, the new transport secretary (and deputy prime minister) John Prescott took a much harder line. When Swift's five-year term of office expired on 30 November 1998, he was not reappointed.[7] After an interim holding period, during which Chris Bolt, Swift's chief economic adviser and effective deputy, filled the regulator's position, in July 1999 a new rail regulator began a five-year term, and a new, much tougher regulatory era began.[8]

The new rail regulator, Tom Winsor (later Sir Thomas Winsor), had been Swift's general counsel (1993–95), and adopted a more interventionist and aggressive regulatory approach.[9] At times the relationship was stormy, with Railtrack resisting pressure to improve its performance. In April 2000 it was reported in the Guardian that "Railtrack is adopting a deliberate 'culture of defiance' against the rail regulator".[10] Gerald Corbett, Railtrack's chief executive at the time, and Winsor clearly saw things very differently from each other. Railtrack resisted regulatory action to improve its performance, and as the regulator probed ever more deeply, serious shortcomings in the company's stewardship of the network were revealed.[11]

It was the Hatfield crash on 17 October 2000 that proved to be the defining moment in Railtrack's collapse.[12] The subsequent major repairs undertaken across the whole British rail network are estimated to have cost in the order of £580 million. According to Christian Wolmar, author of On the Wrong Line, the Railtrack board panicked in the wake of Hatfield.[13] Because most of the engineering skill of British Rail had been sold off into the maintenance and renewal companies, Railtrack had no idea how many Hatfields were waiting to happen, nor did they have any way of assessing the consequence of the speed restrictions they were ordering - restrictions that brought the railway network to all but a standstill.[14]

Regulatory and customer pressure had been increasing, and the company's share price began to fall sharply as it became apparent that there were serious shortcomings in the company's ability to tackle and solve its greatest problems.[15] 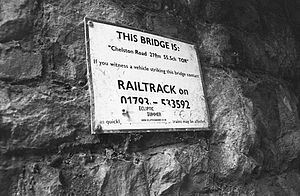 Photograph of a sign identifying a bridge maintained by Railtrack

Meanwhile, the costs of modernising the West Coast Main Line were spiralling.[16] In 2001, Railtrack announced that, despite making a pre-tax profits before exceptional expenses of £199m, the £733m of costs and compensation paid out over the Hatfield crash plunged Railtrack from profit to a loss of £534m.[17] This caused it to approach the government for funding, which it then controversially used to pay a £137m dividend to its shareholders in May 2001.[18]

Railtrack plc was placed into railway administration under the Railways Act 1993 on 7 October 2001, following an application to the High Court by the then Transport Secretary, Stephen Byers.[19] This was effectively a form of bankruptcy protection that allowed the railway network to continue operating despite the financial problems of the operator. The parent company, Railtrack Group plc, was not put into administration and continued operating its other subsidiaries, which included property and telecommunications interests.

For most of the year in administration, the government's position had been that the new company would have to live within the existing regulatory settlement (£14.8 billion for the five years 2001-2006). However, it soon became obvious that that was impossible, and that the aftermath of the Hatfield crash had revealed that the network required significantly more money for its operation, maintenance and renewal. It was reported on 23 November 2001, that a further £3.5 billion may be needed to keep the national railway network running, a sum disputed by Ernst & Young, the administrators.[20]

To get Railtrack out of administration, the government had to go back to the High Court and present evidence that the company was no longer insolvent. The principal reason given by the government to the court for this assertion was the decision of the rail regulator – announced on 22 September 2002 – to carry out an interim review of the company's finances, with the potential to advance significant additional sums to the company.[21] The High Court accepted that the company was not therefore insolvent, and the railway administration order was discharged on 2 October 2002.

Transfer of assets to Network Rail

Network Rail's acquisition of Railtrack plc was welcomed at the time by groups that represented British train passengers. The attitude of Railtrack's customers – the passenger- and freight-train operators – was much more cautious, especially as they were wary of a corporate structure under which shareholders' equity was not at risk if the company's new management mis-managed its affairs.[24]

Railtrack's parent company, Railtrack Group, was placed into members' voluntary liquidation as RT Group on 18 October 2002.[25] The Railtrack business (and its £7 billion debt) had been sold to Network Rail for £500 million, and the various diversified businesses it had created to seek to protect itself from the loss-making business of running a railway were disposed of to various buyers.[26] £370 million held by Railtrack Group was frozen at the time the company went into administration and was earmarked to pay Railtrack shareholders an estimated 70p a share in compensation. The Group's interest in the partially built High Speed 1 line was also sold for £295m.[26]

Railtrack shareholders formed two groups to press for increased compensation.[27] A lawyer speaking for one of those groups remarked on GMTV that his strategy was to sue the government for incorrect and misleading information given at the time Railtrack was created, when John Major was Conservative Prime Minister. An increased offer of up to 262p per share was enough to convince the larger shareholder group, the Railtrack Action Group, to abandon legal action. The Chairman, Usman Mahmud, believed that legal action would not be successful without the support of management and major shareholders.[28]

The legality of the decision to put Railtrack into railway administration was challenged by the smaller Railtrack Private Shareholders Action Group. Their action against the government alleged that the Secretary of State for Transport at the time – Stephen Byers MP – had, by deciding to cut off funding for Railtrack and asking the High Court to put the company into railway administration, committed the common law tort of misfeasance in public office.[28] It is believed that there was £532 million available to Railtrack comprising £370 million in the bank[29] and £162 million of an existing Department of Transport loan facility still available to be drawn down, but Stephen Byers MP cancelled this facility, causing shareholders to believe that he had broken the loan agreement.[30]

This was the largest class action ever conducted in the English courts – there were 49,500 claimants, all small shareholders in Railtrack. Keith Rowley, QC, the barrister for the shareholders, alleged Byers had "devised a scheme by which he intended to injure the shareholders of Railtrack Group by impairing the value of their interests in that company without paying compensation and without the approval of Parliament".[31]

The case was heard in the High Court in London in July 2005; some embarrassment was caused to Byers when he admitted that an answer he had given to a House of Commons Select Committee was inaccurate, but on 14 October 2005 the judge found that there was no evidence that Byers had committed the tort of misfeasance in public office.[32]

The private shareholders decided not to appeal against the judgment, because there were no legal grounds for doing so. For many of them – who had contributed around £50 each, on average, to the fighting fund to bring the action – the case had served its purpose.[33]

The circumstances in which Railtrack had been put into administration were highly controversial, with allegations in Parliament on 24 October 2005 that the company had not been insolvent at the time (7 October 2001) and therefore that the administration order had been wrongly obtained. This was because of the jurisdiction of the independent rail regulator – at the time Tom Winsor – to provide additional money to maintain the company's financial position. Sir Alan Duncan MP, then the shadow transport secretary, said in Parliament that this aspect of the affair – which was not dealt with in the shareholders' case in the High Court – was "perhaps the most shameful scar on the Government's honesty" and "an absolute scandal".[34]

Byers apologised in the House of Commons on 17 October 2005 for having given a "factually inaccurate" reply to the Select Committee but said that he had not intended to mislead them.[35] This personal statement to Parliament was not accepted by the MP who had asked the original question, and the matter was remitted to the House of Commons Standards and Privileges Committee for investigation. As a result of that committee's report, Mr Byers made another statement of apology to Parliament.[36] 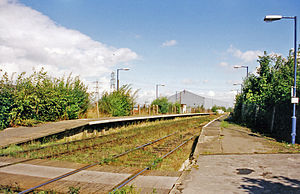 RT Group plc (in voluntary liquidation) made a number of payments to shareholders during the winding up of the company's affairs before finally being dissolved on 22 June 2010.[37]

Gerald Corbett was the company's Chief Executive from 1997 until his resignation in 2000. He was succeeded by Steve Marshall, who announced his own resignation the day after the company was put into railway administration.

Geoffrey M. T. Howe was elected Chairman in 2002[39] to seek compensation for shareholders. He stepped down a few months later when the Government offered 262p per share.