From Infogalactic: the planetary knowledge core
Jump to: navigation, search
Not to be confused with Rainham, Kent.

Rainham is a suburban town in east London, England, and part of the London Borough of Havering.[2] Traditionally part of the nearby county of Essex, Rainham is located located 13.6 miles (21.9 km) east of Charing Cross, it is one of the locally important district centres identified in the London Plan[2] and is surrounded by a residential area, which has grown from the historic village, to the north and a commercial area, fronting the River Thames, to the south. As part of the suburban growth of London in the 20th century, Rainham significantly expanded and increased in population, becoming part of Hornchurch Urban District in 1934, and has formed part of Greater London since 1965. The economic history of Rainham is underpinned by a shift from agriculture to industry and manufacture[3] and is now in a period of regeneration, coming within the London Riverside section of the London Thames Gateway Development Corporation area of responsibility.[4]

Rainham is recorded in the Domesday Book of 1086 as Raineham and is thought to mean 'homestead or village of a man called Regna', formed from an Old English name and 'hām', meaning settlement.[6] It is also possible that it follows Rainham, Kent which is thought to derive 'home of the Roegingas'. This is also of uncertain meaning, but could refer to 'the ruling people'.[6]

For much of its history Rainham was an agricultural settlement, using the River Thames for trade.[7] In the 16th century industry was limited to a boat-builder and tannery. There are links between Rainham farms and the City of London from the Middle Ages and after the wharf was redeveloped in the 1720s trade increased; including the bringing of muck from London for use in the fields. By 1929 most of the farmland had been given over to market gardening.[7] The ferry to London was supplemented with new coaching links in the 18th century and a railway station opened in 1854. A second wharf was constructed in 1872 and from 1869 there was a growth in industrial development, including chemical and fertiliser factories.[7] The Murex iron-founders moved to Rainham in 1917 and grew along the river, eventually becoming part of the British Oxygen Company. Away from the river, other industries included brickmaking and after World War II there was a growth in gravel extraction.[7] 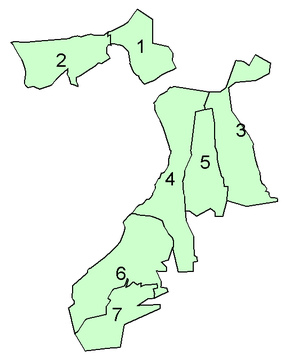 Rainham formed an ancient parish of 3,253 acres (1,316 ha) in the Chafford hundred of Essex.[8] In 1836 the vestry lost control of poor relief, with Rainham becoming part of the Romford Poor Law Union and in 1875 the parish became part of Romford rural sanitary district. Following the Local Government Act 1894, the sanitary district became Romford Rural District and a parish council was formed. The parish formed part of the London Traffic Area from 1924 and the London Passenger Transport Area from 1933.[9] In 1934 the parish council was abolished and Upminster was combined with other parishes to form part of Hornchurch Urban District. In 1965 the urban district was abolished and its former area was combined with that of Municipal Borough of Romford; and since then has formed part of the London Borough of Havering in Greater London.[10]

The earliest development was around the Church of St Helen and St Giles, and this is the only medieval building to survive.[3] New prosperity from increased trade in the early 18th century led to several new buildings, including Rainham Hall.[3] Roads were laid out in 1880 and the new developments consisted of semi-detached and terraced houses. At the same time a community developed around a pub on the river and operated as a resort for day-trippers. As the Thames industrialised it declined in popularity and was gone by 1945. Rainham developed into a suburb of London after World War I. As the estates were broken up for housing some land was purchased by smallholders from Bow and West Ham.[3] In the 1940s they successfully campaigned against having it returned to agricultural use and it was excluded from the Metropolitan Green Belt.[3] The roadways and sewerage systems did not keep up with the rate of growth and a residents' group fought for improvements in infrastructure throughout the 1960s.[3]

File:Rainham Clocktower.JPG
The clocktower is a World War I memorial and forms a focus of the town

Rainham is mostly situated on gravel, rising to between 60 feet (18 m) and 100 feet (30 m).[3] The marshlands along the southern boundary of the River Thames are about 5 feet (1.5 m) above sea level and a tidal section of the River Ingrebourne forms the western boundary. It is located in part of London that is susceptible to flooding.[13] The historic core of Rainham, including the town centre, forms a conservation area.[14] The land to the south has been affected by gravel extraction and 200 acres (0.81 km2) of Rainham Marshes has been filled with 9 million tons of dredged soil by the Port of London Authority.[3] Rainham is a post town in the RM postcode area; it covers a wide area of southern Havering and additionally includes Coldharbour, South Hornchurch and Wennington.[15] Climate data is taken from the nearest weather station at Greenwich, around 8.7 miles (14.0 km) southwest of Rainham:

The northern part of Rainham is identified in the London Plan as a local district centre with 20,000 square metres (220,000 sq ft) of commercial floorspace.[2] Within Havering, it is identified as one of seven town centres in the borough,[23] with a retail area extending along Upminster Road South and Broadway.[24]

The southern part of Rainham is a centre for employment, part of the London Riverside business improvement district, and the location of the Tilda Rice main plant. Several large companies have operations and offices based in Rainham, including Keebles, Carpetright, Harveys Furniture, and Rainham Steel.

The plans of the London Thames Gateway Development Corporation include 3,200 new homes and the upgrading of run-down industrial and warehouse facilities on the A1306 road to provide mixed-use development.[25] In 2006 Havering London Borough Council proposed that land in Rainham could be used for a large regional casino.[26]

Havering Council's urban strategy recognises that nearby Hornchurch is the main cultural hub of the borough with a large theatre and arts spaces, and Romford offers the largest regional concentration of entertainment facilities.[27]

Further information: Transport in London and Public transport in Havering

The A1306 road passes through Rainham and acts an alternative route to the main A13 road between Central London and the Dartford Crossing. High Speed 1 and the London-Tilbury-Southend Line pass through the area, with Rainham railway station served by c2c train services running between Fenchurch Street in the City of London and Grays in Thurrock[28] and is in London fare zone 6.[29] Several London Bus routes serve Rainham, including routes 103, 165, 287, 372, which provide connections to Barking, Elm Park, Hornchurch, Lakeside and Romford.[30] The London Loop key walking route passes through Rainham, and it forms the end point of section 23 from Upminster Bridge and the starting point of section 24 to Purfleet.[31][32]

The Belvedere Crossing is a proposed tunnel or bridge, between Belvedere and Rainham[33]