Rainworth Water LNR was once part of Rufford Colliery, which created the spoil heaps that form a bowl around the watercourse. The spoil heaps were restored after the colliery closure and the planting of thousands of broadleaved trees and other woodland species have stabilised the ground. The Water itself is a wetland habitat consisting of artificial pools, shallows and meanders that appear natural and support dragonflies and damselflies. Marshy areas have developed naturally alongside the watercourse since restoration, as have open grassland and dense scrubland. A colony of Dingy Skipper butterflies, which are rare within Nottinghamshire, inhabits the open grasslands.[3]

The area was declared a Local Nature Reserve in 2005. Most maintenance work on the reserve is conducted by Nottinghamshire County Council but some is undertaken by the Friends of Tippings Wood.[3]

The river rises in Normanshill Wood, to the north-west of Ravenshead and flows eastwards, passing under the A60 road, and to the south of Portland Training College. There are two lakes created by dams, which were once fish ponds.[4] To the north of the second lake is Fountain Dale moat, which is known to have existed in 1251, when there was a hunting lodge on the 52-by-38-yard (48 by 35 m) island, from which tolls were collected by the forester Raffe Clerc. There is a 46-foot (14 m) wide causeway across the north-eastern corner of the moat, which is around 39 feet (12 m) wide, with a substantial bank beyond that. The site has not been disturbed since it was abandoned, and so is better preserved than many residential moated sites in Britain.[5] To the south of the lake is the Grade II listed Fountain Dale House, dating from the mid-eighteenth and nineteenth centuries. At the outlet of the lake is a Grade II listed well head constructed of ashlar and red brick, called Friar Tuck's well,[6] after which the river turns to the north-east to reach another artificial lake called Cave Pond. Passing under Blidworth Lane on the outskirts of Rainworth, it enters an 'L'-shaped lake, called "L Lake", the other branch of which is fed by Foulevil Brook.[7] The main lake covers an area of 4.0 acres (1.62 ha) and is a private fishery, stocked with bream, carp, pike, roach and tench.[8] It forms part of the Rainworth Lakes Site of Special Scientific Interest (SSSI), which covers an area of 36.2 acres (14.6 ha) and has been designated because of the variety of plant species which grow in the open water and adjacent marsh.[9] The naturalist Joseph Whitaker lived by the lakes at Rainworth Lodge.[10] The river passes through the centre of Rainworth village, under the B6020 and the A617 Rainworth bypass. Rainworth Sewage Treatment Works is located on its north-east bank, as is the Rainworth Water local nature reserve, after which it is culverted to pass under a railway embankment associated with Rufford Colliery. By Inkersall Manor there are ponds on both sides, where the name of the woodland, which is Damside Covert, and the presence of earthworks, suggests they were part of a larger lake at one time.[7] 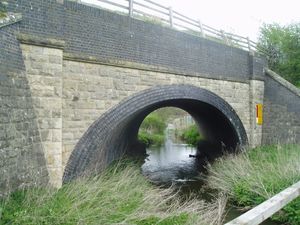 Another lake is located to the east of the woodland, and then Red Bridge carries the A614 over the river. Beyond the road, it turns north, passing under a minor road and a disused railway embankment to the west of Bilsthorpe, with Bilsthorpe Sewage Works on its east bank. Robin Dam Bridge carries another minor road over it, after which it reaches the southern boundary of the country park at Rufford Abbey. Gallow Hall Dyke joins it from the east.[7] Parts of Gallow Hall Dyke and some ponds on the eastern edge of Rufford Lake form the Rufford Country Park Local Nature Reserve. In addition to supporting aquatic and marginal plants, it supports a population of water voles and breeding waterfowl.[3] The Cistercian Abbey was founded in 1147 by Gilbert de Gant, but was partly demolished in 1560 and converted into a country house. After extensions were added in the eighteenth and nineteenth century, it was partly demolished again in 1959. It is a grade I listed structure and an ancient monument, managed by English Heritage.[11] Beyond the ruins of the Abbey, a large lake has been created by a dam at the northern edge of the park, which supplied a water-powered saw-mill. The main building was erected around 1740, and an undershot waterwheel with its gearing is still in situ.[12] The monks at Rufford Abbey are known to have had a water mill, but Sir George Savile chose the present site for his corn mill, where he built a three-storey building with a large dome on the roof. The building was constructed of brick and stone, in a classical style, and was powered by two waterwheels. In the 1860s, Captain Henry Savile began exploiting timber from the estate commercially, and built a saw mill to the east of the corn mill, in a similar style. By that time, one wheel had been removed, and the remaining wheel was refurbished. It only powered the saw mill, as corn milling ceased in 1865. The saw mill was still in working order when the estate was sold in 1938. Oates of Worksop bought it as a going concern, and used it until 1949.[13] Much of the estate including the mill was bought by Nottinghamshire County Council in the 1950s, and became Rufford Country Park in 1969.[14]

By the mid-1970s, the lake had become silted up, and a programme of dredging and landscaping was carried out by the council. Subsidence, caused by coal mining, created problems in the 1980s, and extensive repairs were needed to both the lake and the dam, which were completed in 1991.[13] Below Rufford Lake, Rainworth Water crosses the road to Wellow by a ford. On the southern edge of Ollerton, the A614 road crosses again, and the river is carried through a railway embankment by a skew bridge. Just beyond, the river joins the River Maun close to another bridge carrying the A614 over the combined flow.[7]