From Infogalactic: the planetary knowledge core
Jump to: navigation, search
Not to be confused with Rakia. For other uses, see Raki (disambiguation).

Rakı (Turkish: Rakı, Greek: Ρακί or Ρακή or "Τσικουδιά"[1] Ottoman Turkish: راقى, pronounced [ɾaˈkɯ]) is an unsweetened, anise-flavored Turkish alcoholic drink that is popular in Turkey, Greece, Iran, Turkic countries, and in the Balkan countries as an apéritif. It is often served with seafood or meze. It is similar to several other alcoholic beverages available around the Mediterranean and the Middle East, e.g. pastis, ouzo, sambuca, arak, Aragh Sagi and aguardiente. In Turkey, it is considered a national drink.

The term raki entered English from Turkish rakı.[1] The word rakı is derived from the Arabic عرق [ʕaraq],[2] meaning distilled, other variants being araka, araki, ariki.[3] Araq means perspiration in Arabic,[4] which is believed to metaphorically refer to condensation,[4] which likely refers to the condensation that forms outside of the chilled glass, or the drop-by-drop manner in which rakı is distilled that is reminiscent of sweating, or possibly the phenomenon of unexpected sweating observed in individuals engaging in excessive rakı consumption.[3]

In the Ottoman Empire, until the 19th century, meyhanes run by Rûm and Albanians[5] would mainly serve wine along with meze, due to religious restrictions imposed by various sultans. Although there were many Muslims among meyhane attendants, the authorities could, at times, prosecute them.[original research?] With the relatively liberal atmosphere of the Tanzimat period (1839–1876), meyhane attendance among Muslims rose considerably, and raki became a favorite among meyhane-goers. By the end of the century, raki took its current standard form and its consumption surpassed that of wine.

During this period, rakı was produced by distillation of grapes pomace (cibre) obtained during wine fermentation. When the amount of pomace was not sufficient, alcohol imported from Europe would be added. If anise was not added, it would take the name düz rakı ("straight rakı"), whereas rakı prepared with the addition of gum mastic was named sakız rakısı (gum rakı) or mastikha.

With the collapse of the Ottoman Empire and the establishment of the modern-day Republic of Turkey, grape-based rakı began to be distilled by the state-owned spirits monopoly Tekel, with the first factory production taking place in 1944 in Izmir. With increasing sugar beet production, Tekel also began to distill the alcohol from molasses, and a new brand of raki made from sugar-beet alcohol was introduced under the name Yeni Rakı ("New Rakı"). Molasses gave Yeni Rakı a distinctive bitter taste and helped increase the drink's popularity.

Today, with increased competition from the private sector, and the privatization of Tekel in 2004, several new brands and types of raki have emerged, each with its own distinct composition and production method, although the overall qualities of the drink have generally been kept consistent. These include Efe Rakı, Çilingir Rakı, Mercan Rakı, Fasıl Rakı, Burgaz Rakı, Ata Rakı, and Anadolu Rakı. Sarı Zeybek Rakısı, another recent brand, is aged in oak casks, which gives it a distinctive golden color.

Raki is traditionally produced by twice distilling grape pomace (or grape pomace that has been mixed with ethanol) in traditional copper alembics of 5000 liters, and flavoring it with aniseed.[6]

In Turkey, rakı is the national drink and is traditionally consumed either straight (sek, from the French "sec" meaning neat or dry), with chilled water on the side or partly mixed with chilled water, according to personal preference. Ice cubes are sometimes added. Dilution with water causes rakı to turn a milky-white color, similar to the louche of absinthe. This phenomenon has resulted in the drink being popularly referred to aslan sütü ("lion's milk").[7] Since aslan ("lion") is a Turkish colloquial metaphor for a strong, courageous man, this gives the term a meaning close to "the milk for the strong."

Rakı is commonly consumed alongside meze, a selection of hot and cold appetizers, as well as at a rakı sofrası ("rakı table"), either before a full dinner or instead of it. It is especially popular with seafood, together with fresh arugula, beyaz peynir and melon. It is an equally popular complement to various red meat dishes like kebabs, where it is sometimes served with a glass of şalgam.

The founder and first President of the Republic of Turkey, Mustafa Kemal Atatürk, was very fond of rakı, and his late-night rakı sofrası sessions were his favorite place to debate issues with his closest friends and advisors.[8][9] 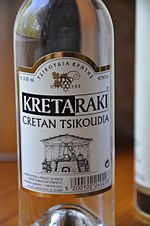 A bottle of Greek Rakı.

Standard rakı is a grape product, though it may be produced from figs as well. Rakı produced from figs, particularly popular in the southern provinces of Turkey, is called incir boğması, incir rakısı ("fig rakı"), or in Arabic, tini. Tekel ceased producing fig rakı in 1947.[citation needed]

Suma rakı, i.e. distilled rakı prior to the addition of aniseed, is generally produced from raisins but raki factories around established wine-producing areas like Tekirdağ, Nevşehir, and İzmir may also use fresh grapes for higher quality. Recently, yaş üzüm rakısı ("fresh-grape raki") has become more popular in Turkey. The maker of a recent brand, Efe Rakı, was the first company to produce raki exclusively of fresh grape suma, called Efe Yaş Üzüm Rakısı (Efe Fresh Grape Raki). Tekirdağ Altın Seri (Tekirdağ Golden Series) followed the trend and many others have been produced by other companies.

The best-known and popular brands of rakı, however, remain Yeni Rakı, originally produced by Tekel, which transferred production rights to Mey Alkol upon the 2004 privatization of Tekel, and Tekirdağ Rakısı from the region of Tekirdağ, which is famous for its characteristic flavor, believed to be due to the artesian waters of Çorlu used in its production. Yeni Rakı has an alcohol content of 45% and 1.5 grams of anise per liter; Tekirdağ Rakısı is 45% ABV and has 1.7 grams of anise per liter. There are also two top-quality brands called Kulüp Rakısı and Altınbaş, each with 50% ABV.

Dip rakısı ("bottom rakı") is the rakı that remains in the bottom of the tanks during production. Bottom rakı is thought to best capture the dense aroma and flavor of the spirit, and is also called özel rakı ("special raki"). It is not generally available commercially; instead, rakı factories reserve it as a prestigious gift for large clients.

Anise-flovored Rakı, has been celebrated as a festival in Adana and Northern Cyprus since 2010. World Rakı Festival in Adana, emerged from a hundred-year tradition of enjoying Adana kebab, with liver, şalgam and rakı. The event turned into a nationwide popular street festival, street musicians playing drums and zurna, entertain visitors all night long at the second Saturday night of every December.[10] North Cyprus Rakı Festival is a week long festival taking place in Girne, Lefkoşa and Gazi Magosa.[11]

Rakomelo, that is, cinnamon with other spices and honey[12] brandy concoctions, and called "cinnamon liqueur" and made with rakı[13] or tsipouro, are popular in parts of Greece.[14][15] Rakomelo is one of many cinnamon-infused liquors on the market.