From Infogalactic: the planetary knowledge core
Jump to: navigation, search
Not to be confused with Rakı.
For RAKIA, see Ras Al Khaimah Investment Authority. 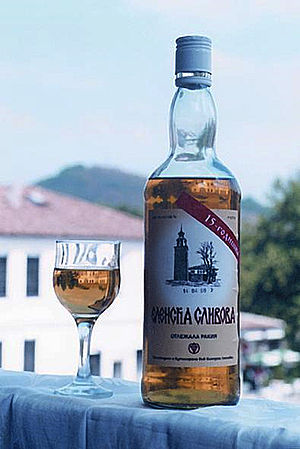 Plum rakia from the region of Elena, Bulgaria

Rakia or Rakija (pronounced rakiya) is the collective term for fruit brandy popular in the Balkans. The alcohol content of rakia is normally 40% ABV, but home-produced rakia can be stronger (typically 50% to 80% but going as high as 90% at times).

The origins of rakia are unknown. It is considered that the name is derived from the Arabic عرق [ʕaraq] meaning "condensation" (which is the final phase of distillation), through the Turkish rakı, leading some[who?] to believe that it has some Middle Eastern influence and was developed in the Balkans during the Ottoman Empire era. Currently, there is no defined origin of rakia but there are many who claim to be the origins of the drink. A team of archaeologists led by Philip Petrunov have recently discovered, near the fortress "Lyutitsa" (in Ivaylovgrad), a fragment of a distillation container for the production of rakia. According to experts discovery dates back to the XI century AD and this proves that rakia is produced and consumed in Bulgaria in the XI century AD. Unknown Bulgarian nobleman from Veliko Tarnovo, in the XIV century wrote on a glass that drinking rakia during the Church Holiday. In support of that rakia in Bulgaria was known before the invasion of the Ottomans is justification of the Turkish commander Lala Sahin to the Ottoman sultan that in 1382 failed to conquer Sofia, because "the defense of the city was entrusted to strong, healthy Bulgarians "with mustaches" that before battle drank rakia and so became invincible".

Common flavours are šljivovica, produced from plums, kajsija, produced from apricots, or grozdova/lozova (raki rrushi in Albania and Kosovo), or "Loza" in Croatia, Montenegro, Serbia and Bosnia produced from grapes, the same as "Zivania" in Cyprus. Fruits less commonly used are peaches, apples, pears, cherries, figs, blackberries, and quince. Similar spirits are produced in Romania, Moldova, Poland, Russia and the Caucasus. In Albania, rakia is most commonly made out of grapes in mild climate regions and out of plums (and sometimes out of mulberry or walnuts) in colder climate areas.

Plum and grape rakia are sometimes mixed with other ingredients, such as herbs, honey, sour cherries and walnuts, after distillation. A popular home-made variant in Bosnia and Herzegovina, Bulgaria, Macedonia, and Serbia is rakia produced from mixed fruits. In the Istrian and Dalmatian regions of Croatia, rakija tends to be home-made exclusively from grapes, where the drink is also known locally as trapa or grappa (the latter name also being used in Italy).

Normally, rakia is colorless, unless herbs or other ingredients are added. Some types of rakia are kept in wooden barrels (oak or mulberry) for extra aroma and a golden color.

It is supposed to be drunk from special small glasses which hold from 30 to 50 ml.

Greek ouzo (from grape) and tsipouro (from pomace), Turkish rakı (from sun dried grapes) and arak at Arabic and Middle Eastern countries differ from rakia as they are redistilled with some herbs (commonly anise). Some tsipouro in Greece is made without anise in the same manner as pomace rakia (or pomace brandy). "Boğma raki" in Turkey (common name of the domestic raki which is produced at homes and villages) is similar to rakia in the Balkans.

Raki (definite Albanian form: rakia) (a type of rakia) is a traditional drink in Albania[1] and Kosovo.[2] In the Ottoman Empire, until the 19th century, meyhanes would serve wine or meze.[3]

Bulgaria cites an old piece of pottery from the 14th century in which the word rakinja is inscribed. The country has taken measures to declare the drink as a national drink in the European Union to allow lower excise duty domestically but has yet yielded no concrete results.[4] During an archaeological study, Bulgarian archaeologists discovered an 11th-century fragment of a distillation vessel used for the production of rakiya. Due to the age of the fragment, hence contradicting the idea that rakiya production only began in the 16th century, some historians believe this indicates that rakiya did originally come from Bulgaria.[5]

Most of the rakia, made in Bulgaria and on the Balkans now, although advertised as grape brandy, is not made out of grapes, but neutral (grain) alcohol instead with some artificial coloring and flavors added.[citation needed]

Rakija is the most popular spirit in Croatia.[6] Travarica (herbal rakija) is usually served at the beginning of the meal, together with dried figs. The Croatian Adriatic coast is known for a great variety of herbal grappas, some typical for only one island or group of islands. The island Hvar is famous for grappa with the addition of Myrtus (mrtina — bitter and dark brown). Southern islands, such as Korčula, and the city of Dubrovnik are famous for grappa with anise (aniseta), and in central Dalmatia the most popular rakia is grappa with nuts (orahovica). It's usually homemade, and served with dry cookies or dried figs. In the summer, it's very typical to see huge glass jars of grappa with nuts steeping in the liquid on every balcony, because the process requires the exposure of orahovica to the sun. In the northern Adriatic — mainly Istria — rakia is typically made of honey (medica) or mistletoe (biska). Biska, which is yellow-brown and sweet, is a typical liquor of Istria. In the interior of the country a spirit called šljivovica (shlivovitza) is made from plums, and one called viljamovka (viliam-ovka) is made from Williams pears. 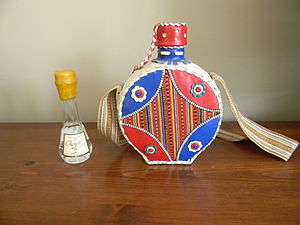 Rakia is one of the most popular alcoholic drinks in Serbia.[7] It is the national drink of Serbia and is globally identified with Serbian culture.[8][9] Serbia is the world's largest rakia producer and drinks more rakia per capita than any other country.[10][11][12] According to Dragan Djuric, President of the Association of Producers of natural spirits Serbian rakija, the EU protects the names of beverages by allowing the prefix Serbian.[7] In Serbia there are 10,000 private producers of rakia. 2,000 are in the official register and only about a hundred cellar produces high-quality brandy.[7] In 2007, the European Union awarded Serbia with trademarks for five different rakia brands (Sljivovica, Dunjevaca, Orahovaca, Medovaca, Kruskovaca and Jabukovaca) making it the only country to have any trademarks for rakia brands.[13]

In Bulgaria, rakia is generally served with shopska salad, milk salad, pickled vegetables (turshiya) or other salads, which form the first course of the meal. Muskatova rakia is made from Muscat grapes, while the preparation method of dzhibrova rakia is the same as for Italian Grappa.

Another popular way of serving is "cooked" (Croatian: kuhana, Serbian: kuvana or grejana, Bulgarian: греяна (grejana), rakia (also called Šumadija tea in Serbia), which is heated and sweetened with honey or sugar, with added spices. Heated in large kettles, it is often offered to visitors to various open-air festivities, especially in winter. It is similar to mulled wine, as weaker brands of rakia are used (or stronger ones diluted with water).

Although wine is the essential part of the Eucharist rite in the Eastern Orthodox and Roman Catholic churches in the region, rakia has found uses in certain religious and related rituals across the Balkans.

At the end of the Orthodox Christian burial service, at the exit from the cemetery, visitors are offered a piece of soda bread (pogača) and a glass of rakia. When drinking "for the soul" of the deceased, one spills some rakia on the ground, saying "For peaceful rest of the soul", before drinking the rest.

During wedding ceremonies, the groom's father goes around all tables and offers a glass of rakia to all guests, sharing a toast for the happiness of the newlyweds. In general, in the Balkans, rakia is offered to guests in one's home as a welcoming gesture.

There are many kinds of rakia, depending on the fruit it is produced from:

*   Kom or džibra is the fruity grape mash that remains after winemaking. It contains up to 5.5 litres of pure alcohol per 100 kg, and at least 40% dry matter.
**  Not to be confused with mead, which is made solely of honey.