Ralph Adams Cram (16 December 1863 – 22 September 1942) was a prolific and influential American architect of collegiate and ecclesiastical buildings, often in the Gothic Revival style. Cram & Ferguson and Cram, Goodhue & Ferguson are partnerships in which he worked. Together with an architect and artist, he is honored on December 16 as a feast day in the Episcopal Church of the United States. Cram was a fellow of the American Institute of Architects.

Cram was born on December 16, 1863, at Hampton Falls, New Hampshire, to William Augustine and Sarah Elizabeth Cram. He was educated at Augusta, Hampton Falls, Westford Academy, which he entered in 1875, and Exeter.[1]

At age 18, Cram moved to Boston in 1881 and worked for five years in the architectural office of Rotch & Tilden, after which he left for Rome to study classical architecture.[2] From 1885 to 1887, he was art critic for the Boston Transcript. During an 1887 Christmas Eve mass in Rome, he had a dramatic conversion experience.[3] For the rest of his life, he practiced as a fervent Anglo-Catholic who identified as high-church Anglican. In the 1890s, Cram was a key figure in "social-controversial-inspirational" groups including the Pewter Mugs and the Visionists.[4]

In 1900, Cram married Elizabeth Carrington Read at New Bedford, Massachusetts. She was the daughter of Clement Carrington Read and his wife.[5] Read had served as a captain in the Confederate Army during the American Civil War. Elizabeth and Ralph had three children, Mary Carrington Cram, Ralph Wentworth Cram and Elizabeth Strudwick Cram.[1] The family burial site is at the St. Elizabeth's Memorial Churchyard.[6] The churchyard is adjacent to St Elizabeth's Chapel, which Cram designed.[7] 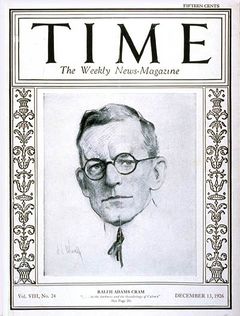 Cram and business partner Charles Wentworth started business in Boston in April 1889 as Cram and Wentworth. They had landed only four or five church commissions before they were joined by Bertram Goodhue in 1892 to form Cram, Wentworth and Goodhue.[8] Goodhue brought an award-winning commission in Dallas (never built) and brilliant drafting skills to the Boston office.

Wentworth died in 1897 and the firm's name changed to Cram, Goodhue & Ferguson to include draftsman Frank Ferguson. Cram and Goodhue complemented each other's strengths at first but began to compete, sometimes submitting two differing proposals for the same commission. The firm won design of the United States Military Academy at West Point in 1902, a major milestone in their career. They set up the firm's New York office, where Goodhue would preside, leaving Cram to operate in Boston. From 1907 to 1909 Cram was the editor of Christian Art.[8]

Cram's acceptance of the Cathedral of St. John the Divine commission in 1911 (on Goodhue's perceived territory) heightened the tension between the two. Architectural historians have attributed most of their projects to one partner or the other, based on the visual and compositional style, and the location. The Gothic Revival Saint Thomas Church was designed by them both in 1914 on Manhattan's Fifth Avenue. It is the last example of their collaboration, and the most integrated and strongest example of their work together.

Goodhue began his solo career on August 14, 1913. Cram and Ferguson continued with major church and college commissions through the 1930s. Particularly important work includes the original campus of Rice University, Houston, as well as the library and first city hall of that city. Also notable is Cram's first church in the Boston area, All Saint's, Dorchester. The successor firm is HDB/Cram and Ferguson of Boston.

A leading proponent of disciplined Gothic Revival architecture in general and Collegiate Gothic in particular, Cram is most closely associated with Princeton University, where he served as supervising architect from 1907 to 1929, during a period of major construction. The university awarded him a Doctor of Letters for his achievements.[1] In 1907, he served as chairman of the American Institute of Architects' Committee on Education.[8]

For seven years he headed the Architectural Department at Massachusetts Institute of Technology.[9] Through the 1920s Cram was a public figure and frequently mentioned in the press. The New York Times called him "one of the most prominent Episcopalian laymen in the country".

He made news with his defense of Al Smith during his electoral campaign, when anti-Catholic rhetoric was used, saying "I... express my disgust at the ignorance and superstition now rampant and in order that I may go on record as another of those who, though not Roman Catholics, are nevertheless Americans and are outraged by this recrudescence of blatant bigotry, operating through the most cowardly and contemptible methods."[10]

In around 1932, he designed the Desloge Chapel in St. Louis, MO, the Gothic chapel designed to echo the contours of the St. Chapelle in Paris. Desloge Chapel, which is associated with the Firmin Desloge Hospital and St. Louis University, in 1983, was declared a landmark by the Missouri Historical Society.[11][12] In 1938, he was elected into the National Academy of Design as an Associate Academician.

As an author, lecturer, and architect, Cram propounded the view that the Renaissance had been, at least in part, an unfortunate detour for western culture.[13] Cram argued that authentic development could come only by returning to Gothic sources for inspiration,[2] as his "Collegiate Gothic" architecture did, with considerable success. For his Rice University buildings, he favored a medieval north Italian Romanesque style, more in keeping with Houston's hot, humid climate.

A modernist in many ways, he designed Art Deco landmarks of great distinction, including the Federal Building skyscraper in Boston and numerous churches. For example, his design of the tower of the East Liberty Presbyterian Church, Pittsburgh, was inspired by the Empire State Building. His work at Rice was as modernist as medieval in inspiration. His administration building, his secular masterwork, has been compared by Shand-Tucci to Frank Lloyd Wright's work, particularly in the way its dramatic horizontality reflects the surrounding prairies.[citation needed]

The architectural historian Sandy Isenstadt wrote in a review of Cram's biography that "... (modernist) disdain (of Cram) turned out to be modernism's loss".[citation needed] Peter Cormack, director of London's William Morris Gallery, said regarding the critical neglect of Cram's work that it was "a phenomenon which has significantly distorted the study of America's modern architectural history... (Cram) deserves the same kind of international--and domestic--recognition accorded (all too often uncritically) to his contemporary Frank Lloyd Wright".[citation needed] 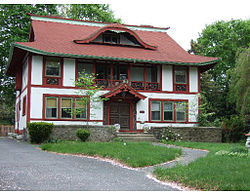 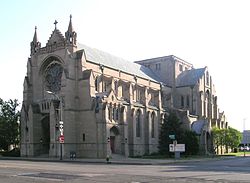 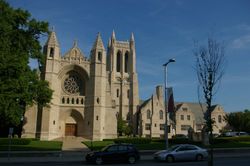 Church of the Covenant in the University Circle neighborhood of Cleveland, 1911 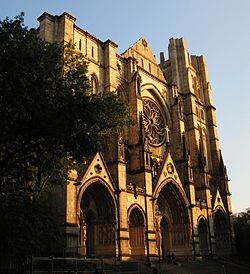 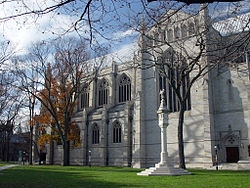 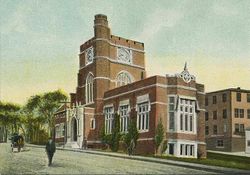 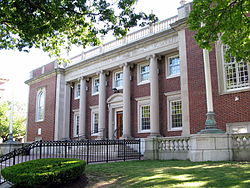 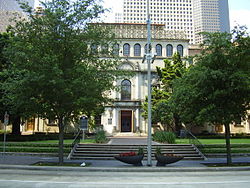 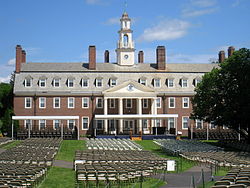 Cram wrote numerous publications and books on issues in architecture and religious devotion. Titles include:

Cram also wrote fiction. A number of his stories, notably "The Dead Valley", were published in a collection entitled Black Spirits and White (Stone & Kimball, 1895). The collection has been called "one of the undeniable classics of weird fiction".[18] H. P. Lovecraft wrote, "In 'The Dead Valley' the eminent architect and mediævalist Ralph Adams Cram achieves a memorably potent degree of vague regional horror through subtleties of atmosphere and description."[19]

Cram, together with the architect Richard Upjohn and artist John LaFarge, is honored on December 16 as a feast day on the liturgical calendar of the Episcopal Church (USA).[21]